Saint Zeno is a redirect to this article. See also Saint Zeno . 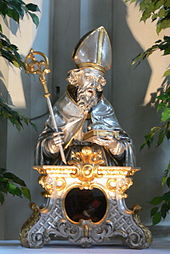 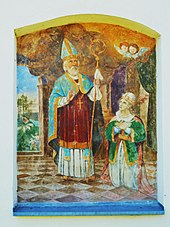 Representation of St. Zeno on the outer wall (apse) of the Catholic parish church in Kappel an der Drau . The saint heals the daughter of the emperor Gallienus possessed by the devil.

Zenon was of Mauritanian origin . Its name is derived from the Greek father of the gods Zeus , but such old names (such as Origen ) were nothing special among late ancient Christians . Nothing certain is known of his life prior to his election as bishop . Reports in which he lived as a fisherman on the Adige and was found there by messengers from the Roman emperor Gallienus to heal his daughter through prayers are a later hagiographic invention - if only because Gallienus lived 100 years earlier. Only his origin and a trip to Palestine before his election as bishop seem certain .

On December 8, 362, Zenon succeeded Cricinus as the eighth bishop of Verona. Christian authors praise his fearless drive against the regaining paganism under Julian and his struggle against the followers of Arianism . He is considered a great preacher and scholar. Zeno seems to have had a fairly good knowledge of the ancient philosophers, poets, and rhetoricians . It is said that his sermons and his radiation alone converted many Gentiles and Jews to Christianity. He was one of the first to advocate the doctrine of the virginity of the Blessed Virgin Mary .

The accounts of his life are topical , so almost nothing reliable is known. He is said to have lived in poverty and piety and what he had passed on to the poor or used for missions. Even as a bishop, he is said to have earned his living as a fisherman on the Adige. Modern research considers this information to be later pious inventions.

Although he is often portrayed as a martyr , it is believed that he did not die a martyr. His grave is (now) in the Episcopal Church in Verona . Adoration began here shortly after his death .

In Verona, the church of San Zeno Maggiore is consecrated to Zenon . Soon after his death, a church was built over Zenon's grave, which achieved great fame and a certain legendary transfiguration because of the miracles supposedly taking place here . In the event of a flood, according to Gregory the Great, the entire city area except this church was under water.

A monastery was also founded in Verona in honor of Zenon. In Rome there is a Zeno chapel attached to the Basilica of Santa Prassede , in which most of his relics are kept.

As an author, Zeno was evidently very productive, 93 of his treatises have survived to this day. However, it is controversial whether all the writings ascribed to him actually come from his hand.

Zeno as a saint

Adoration in the German-speaking area

St. Korbinian von Freising was one of the first admirers here . In South Tyrol he had a church built for him in Mais (today Zenoberg near Meran ). Since the 8th and early 9th centuries, the saint patron of Zenokirchen has been in Isen , Radolfzell , and Herrischried and also of the Sankt Zeno monastery in Reichenhall . The original parish of the Rosental in Carinthia in Kappel an der Drau is also dedicated to St. Consecrated to Zeno. 806 are said to have relics of St. Zeno came to Kappel from Verona. The parish church of Hafnerbach is also consecrated to St. Zeno and his festival is celebrated there on the 2nd Sunday after Easter.