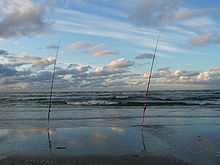 Fishing rods in the mudflats off Juist

The fishing rod (short Angel ) is a device that allows the radius of action when fishing extended and fishing easier. A fishing rod is to facilitate the task of positioning the fish hook with bait on the fishing line to set the first attempt (hook the fish) safely and to drill the fish fast and waidgerecht (the fish tiring) to him then with the Nets safely land.

150 years ago, fishing rods up to 5 m in length were made from willow , hazel or juniper .

The actual development of the fly rods began after the "hazelnut era" around 1840, when resourceful Englishmen discovered exotic hardwoods for rod construction, namely the types of wood Lancewood and Greenheart. Both species had already proven themselves for years in shipbuilding and were imported in large quantities from the West Indies, but above all from British Guyana. Higginbotham succeeded in taking the big step, which can only be regarded as really complete in the last few years, who cut triangular splices from the above-mentioned woods, glued them and thus produced three or four-split rod constructions, thereby replacing the grown rods. With this construction, the line could be thrown for the first time, which was achieved by reducing weight and reducing the top-heaviness.

From then on the development progressed rapidly and in the USA and England the first six-split rods made of bamboo were made almost simultaneously .

Today, materials such as plastics that are reinforced with carbon , aramid (“Kevlar”), glass fibers or mixtures of these fibers have taken up the main market share in the winding of a rod.

The split rods are only used for fly fishing . However, fishing with so-called “split rods” has no advantages over fishing with rods made of modern carbon fiber reinforced plastic (CF). However, they have a certain reputation as status symbols among fly fishermen.

Today a distinction is made between telescopic rods and detachable rods . Among them, in turn, a variety of rod types are distinguished for the most varied of fishing methods:

There are three main characteristics that characterize a fishing rod:

The first important property is stiffness. Derived from the force required to bend, rods are classified according to different systems, which can lead to some confusion. On carp rods in the English tradition, the test curve is often given in lbs ("2.5lbs" means that it takes 2.5 English pounds to bend the tip perpendicular to the end of the handle). On sea rods there is also often a lbs specification, but this refers to the load capacity of the line, which harmonizes best with the bending behavior of the rod ("50lbs" means here that the line should have a load capacity of approx. 20 kg) . In continental Europe rods are mostly classified according to the so-called casting weight. A casting weight of 80 g means that the rod works optimally when throwing a weight of this mass. The "Power" scale, which is mostly used for spinning rods, comes from the American region. As with the other classification procedures, there are no standardized values ​​here. Very flexible rods are designated as xl (extra light), medium rods as m (medium) and heavy rods as xh (extra heavy). There are analogous names for the strengths in between. Fly rods are also divided into line classes, but here it is not the load capacity but the weight of the line to be cast that is used as a yardstick.

The second decisive criterion is the type of bending behavior under varying loads. Some rods have a very soft tip, while the larger part of the rod hardly bends even under load. Others, on the other hand, bend almost evenly from the tip to the handle when the load increases. In the first case one speaks of a "fast" action, in the latter of a "slow" or "parabolic" action. All gradations are possible between these two extremes, for which various names have become established.

The terms “fast” and “slow” are misleading, as they refer to a third criterion, which is not only given by the action, but also depends heavily on the material: the return speed. This is a measure of the resilience of the rod, how quickly it returns to the straight position after a deflection. There is no commonly used measuring system for this criterion of rods, but it is decisive for the individual quality impression that a rod leaves on the user. Rods with a slow return speed are perceived as "wobbly" and do not have good casting and bait control properties. In contrast to stiffness and action, which should be measured differently depending on the area of ​​application of the rod, a fast return speed is generally considered to be desirable.

The fishing rod is also known as the hunger whip or worm whip .