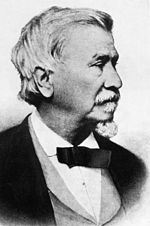 August Kappler (born November 11, 1815 in Mannheim , † October 20, 1887 in Stuttgart ) was a German researcher and entrepreneur in Suriname . In December 1846 he founded the place Albina on Marowijne ( French: Maroni), the border river between Suriname and French Guiana .

Kappler was born in Mannheim as the son of the teacher Michael Kappler and his wife Friederike née Spittler. He was the youngest of four children. After his confirmation , he completed a commercial training first in Stuttgart and later in a trading house in Heilbronn . Due to the poor economic situation in Germany, he decided to leave his home country at the age of 19 soon after completing his apprenticeship. In June 1835 he went to Greece to serve in the army of the newly founded kingdom there. However, this failed because he did not have a passport. He briefly returned to Stuttgart and then made the decision to join the Koninklijk Nederlandsch-Indisch Leger . In July 1835 he left Stuttgart for the second time and reported in Harderwijk in the advertising depot for the Dutch colonial army. However, since a unit had just left for the Dutch East Indies , he joined a detachment with the goal of Suriname. The ship sailed on December 16 and reached Suriname on January 18, 1836, where he began a six-year service.

He was lucky enough to spend a large part of his military service not in the city of Paramaribo , but on the many small military posts that existed in the country at that time. The service was light and the staffing of these posts few, so that he had a lot of free time. He used the opportunity to explore nature and collect plants and insects. Of the first four years of his service, he spent two and a half years in this post. In 1840 he was transferred to the Armina post on the upper reaches of the Marowijne. Here and during his time at the Prins Willem Frederik Hendrik sentry at the mouth of the river, he made the decision to later settle down permanently on the Marowijne in order to live independently and free in the wild. In November 1841 he ended his service as a non-commissioned officer ( Fourier ).

During his service, Kappler had acquired excellent knowledge of the country and its people, the flora and fauna.

After a short journey back via Amsterdam to his relatives in Stuttgart, he returned to Suriname in July 1842. He spent the period from 1842 to 1846 in Paramaribo. From his apartment he went hiking almost every day to catch insects and especially butterflies in the vicinity of Paramaribo. He sold these as well as live and dried plants with great success in Paramaribo as well as in Europe. In June 1845 he went on his second trip to the Netherlands with a rich collection of natural objects. But by March 1846 he was back in Suriname. Without difficulty, he received permission from the governor to settle on the Dutch bank of the Marowijne. In December 1846 he reached the river and, with the support of the local Caribs, began building his new place to live. He gave the name Albina to his branch after his childhood friend and later wife Albina Josefine Liezenmaier.

When slavery was abolished in French Guiana in 1848 and the escape of slaves from Suriname to French Guiana was feared, Kappler got a permanent job as a postman in June 1849 with a salary of 56 guilders per month. 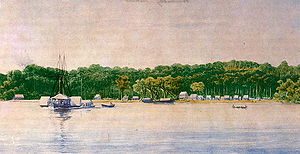 After he found a business partner for the timber trade in the Netherlands in the company Kreglinger & Co from Amsterdam, he brought 10 wood chippers, 5 women and 5 children from Württemberg to Albina in 1853 . The daily wage for the workers was 1 guilder , with free board and lodging. This and other attempts to colonize the country with Württemberg people failed four years later due to tropical diseases and quarrels. From 1858 onwards, Kappler took Chinese people into service.

In addition to his work as a postman and border official for the governorate, he also accompanied Dutch-French expeditions as a guide and translator in 1861 and 1862 , in order to explore the course of the Upper Marowijne, among other things. This was to determine which tributary must form the border between French Guiana and Suriname.

When the governorate bought back part of Albina in 1876 and appointed a district commissioner , Kappler felt limited in his freedom and traveled back to Europe in July 1879. He himself wrote about his time at the Marowijne: “ So on this river, which was never of any use to the colony, yes it was first made known through my settlement, without all help, support and protection, I faithfully have what I have for mine Benefit of the colony and the industry of the motherland contributed. On July 4th, 1879, I left the country that was so dear to me . "

After his return, Kappler made several trips in Europe and one trip around the world. He wrote his last books (1881, 1887) and essays about his travels in Stuttgart. He died on October 20, 1887, 71 years old, of complications from a stroke. His wife Albina followed him 17 years later. As a token of thanks and solidarity with the Dutch Guiana , the coffin was covered with the red, white and blue flag of the Netherlands at Kappler's express request.

These two most important works by Kappler are also published in Dutch.

In this publication by Wi Rutu ( Sranan , translated: Our roots), the journal for Surinamese genealogy, the Dutch historian Okke ten Hove wrote an article about August Kappler. There is also a list of all 70 people (including women and children) who worked for Kappler in Albina up to 1857 or lived there.

The armadillo species Kappler armadillo is named after him.