Side view of the church

The Basilica of Santa Prassede ( Latin: Sanctae Praxedis ) is an early medieval titular church in Rome . It is located near the Church of Santa Maria Maggiore on the Esquiline .

The first church on this site was probably built by order of Pope Siricius (384 to 399). It is possible that there was already a much older church at this point, which was donated by the namesake. The first reliable mention is from the year 489. Probably already under Pope Hadrian I there were considerable extensions. From 817 to 824 Pope Paschal I had the church built from scratch. What is special is that the building and the furnishings are strongly related to early Christian ideas, which corresponds to the zeitgeist of the epoch ( Carolingian Renaissance ).

This is why this church and its furnishings can still be classified in the transition from late antiquity to the early Middle Ages . In addition, Santa Prassede is the most important example of Byzantine art in Rome. The model for the building was Alt St. Peter . The bell tower , which was probably built over the nave in the 11th century , is considered the city's oldest bell tower. Between 1560 and 1566 some changes were made, and between 1594 and 1600 the church was renovated. In the 18th century the crypt and sanctuary were renewed. Nevertheless, all in all the basilica has remained unchanged.

The patron saint and namesake of the church is St. Praxedis , and the Zeno Chapel is probably St. Zenon of Verona . Several popes have found their final resting place here ( Celestine I , Fabianus , Felix I , Pontianus , Urban I , who were all reburied here from the Calixtus catacomb ; Paschal I , however, was transferred from here to St. Peter ).

Interior, view of the apse and triumphal arch

The inside dimensions are:

The Zeno Chapel (Cappella di San Zenone) is built on the east side . It was built during the tenure of Pope Paschal and equipped with gilded mosaics . For a long time it was thought to be the burial chapel of his mother Teodora Episcopa , which is no longer considered likely today. The chapel is counted among the most important buildings of the 9th century in Rome .

Santa Prassede owes its fame primarily to its mosaics , which can still be seen unchanged today. Both the triumphal arch and the apse were adorned with masterful mosaics. On the central mosaic of the apse one can see Christ flanked by six saints: Paschal I (with the square nimbus of the baptized person who is still alive), Praxedis, Paul on the left, Peter , Pudentiana and another unknown saint ( possibly Zeno ) on the right. The hand of God hovers over Christ. The four apocalyptic beings and the 24 elders can be seen on the front wall. The triumphal arch shows the heavenly Jerusalem.

Mosaics can also be seen in the zenon chapel. Christ and six of his disciples on each side are arranged in an arch centrally above the entrance. Below is another arch, with Mary in the central position, flanked by five saints each. In addition, two prophets are depicted in the upper corners and two popes in the lower corners . In the dome there is a medallion carried by four angels with Christ in the middle. Some disciples and saints can be seen on the sides.

In 1987 the mosaics were restored and cleaned. 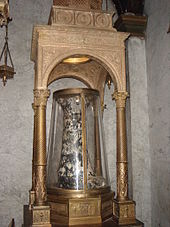 In a side room of the Zeno Chapel there is a fragment of a column that is said to come from the column on which Jesus Christ was scourged. It was brought to Rome in 1223 by Cardinal Giovanni Colonna .

The church also houses the bones of 2,000 martyrs brought here from the catacombs .

On the side gallery to the left of the main altar is an organ that was built in 1942 by the Tamburini organ building company . Pipe material from the previous organ from the 18th century was reused in the instrument . The organ has 26 registers on two manuals and a pedal . The actions are electric.