Gumpoldskirchen is a Lower Austrian market town and wine town with 3910 inhabitants (as of January 1, 2020) on the Thermenlinie .

Gumpoldskirchen, which is congruent with the sole cadastral community of the same name, is located on the thermal bath line and borders the communities of Guntramsdorf , Gaaden , Pfaffstätten and Traiskirchen . The municipality extends from the flat Vienna Basin to the forest areas of the Anninger , which is already part of the Vienna Woods . Gumpoldskirchen does not, as one might assume, border on Mödling , as there is also a strip of the municipality of Guntramsdorf in the middle of the vineyards between the two places.

Gumpoldskirchen is to be assigned to the Pannonian climate and there to the special climate of the thermal bath line . The foothills of the hilly Vienna Woods in the west of the municipality also have an influence on the climate in Gumpoldskirchen . One of the 250 weather stations of the Central Institute for Meteorology and Geodynamics is located in Gumpoldskirchen .

Gumpoldskirchen and Thallern around 1872 ( recording sheet of the state recording ) 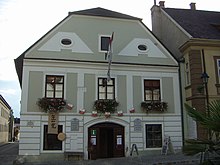 On the Anninger on the Gumpoldskirchen side is the largest cave in the Vienna Woods - the Dreidärrischenhöhle . It is approx. 230 meters deep and has a height difference of 19 meters. Different bat species, some of them very rare, are at home in the cave. In 1983 part of the cave collapsed, caused by permanent explosions in a nearby lime mine. It was a show cave until 1939 - a second artificial entrance was also created during this time.

Gumpoldskirchen is well known for its viticulture . The place belongs to the Thermenregion wine-growing region. Well-known grape varieties that are grown here are the Zierfandler , the Rotgipfler , the Frührote , the Grüner Veltliner and the Neuburger .

Today you can find many wine taverns . However, the winemakers complain that sales have decreased in recent years. Once a year (mid to late August) there is a wine festival in Neustiftgasse.

One of the oldest wineries in Austria is the Thallern estate , registered as a locality (village) , which has been managed by the Cistercians of the Heiligenkreuz Abbey without interruption since 1141 . The Klosterneuburg Monastery winery also has acreage in Gumpoldskirchen, albeit much smaller .

Gumpoldskirchen is on the southern runway . Trains on lines S3 and S4 stop at the stop, which means that there are every half hour to Vienna from Monday to Friday and every hour on weekends. On the road, the place can be reached via the wine route from both Mödling and Baden .

In addition to viticulture, there are some industrial companies that are located in the eastern flat part of the village. According to Statistics Austria, on October 31, 2011, 3,353 were employed at around 336 different workplaces in Gumpoldskirchen.

Cities and municipalities in the Mödling district