from Wikipedia, the free encyclopedia
This is the spotted version , flagged on May 11, 2020 . There is 1 pending change that has yet to be viewed.

The division together with the SS-Totenkopfverband and the Leibstandarte SS Adolf Hitler formed the basis of the later Waffen-SS.

During the attack on Poland , the SS disposable troops were not deployed in a closed unit, but were distributed among several large units of the Wehrmacht . The SS standard "Germany", the intelligence and reconnaissance departments were subordinate to the staff of the Kempf Panzer Division . The SS standard "Germania" was used as a reserve of the 14th Army under Major General Wilhelm List . The pioneer -Sturmbann the SS Verfügungstruppe belonged to the " Leibstandarte SS Adolf Hitler " for the 10th Army under General Walter von Reichenau . The SS standard "Der Führer" was kept on alert as a reserve of the army deployed in the section of the western wall under General Dollmann and did not take an active part in the campaign.

From May 1940, the division was used as part of the western campaign in the Netherlands, Belgium and France. There she fought together with the units of the »Leibstandarte« and the SS death's head associations.

As a replacement for the SS standard "Germania" given to the newly established SS-Division Wiking in November 1940 , the disposal division received the SS-Totenkopf-Standard 11 under the then SS-Obersturmbannführer Karl Diebitsch , location Radom . On February 25, 1941 this standard was renamed SS-Infanterie-Regiment 11, the VT-Division was officially named SS-Division "Reich" (mot.) . 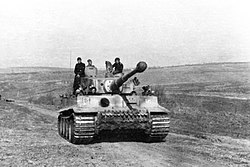 In the course of the preparations for the attack on the Soviet Union on June 22, 1941, the Waffen-SS underwent a fundamental reorganization. The SS disposal division was reclassified into a motorized infantry division in the winter of 1940/41 in southern France. It was given a motorbike rifle division and an assault gun battery, while the standards were renamed regiments.

In March 1941, the division was moved to Timișoara in western Romania to take part in the Balkan campaign. After a successful campaign, the division was moved to its staging area for the Barbarossa company west of Brest-Litovsk . The division belonged to the XXXXVI. Army corps (mot.), Which was part of Panzer Group 2 ( Colonel General Heinz Guderian ) of Army Group Center . The division suffered heavy losses in the fighting in Russia, as a result of which it had to be reorganized in the spring of 1942. For this she was moved to France. On October 15, 1942, the name was changed from "Reich" to "Das Reich".

On November 9, 1942, it was converted into a Panzergrenadier division. Then the division took part in the Anton company . Relocated back to the Eastern Front in the winter of 1942/43, the division fought with the SS Panzer Corps in the Battle of Kharkov and in the summer of 1943 with the Citadel company and then in the Battle of the Dnepr . On October 23, 1943, the SS Panzer Grenadier Division “Das Reich” was finally converted into the 2nd SS Panzer Division “Das Reich” .

In February 1944, the remnants of the SS Panzer Division "Das Reich" were relocated to the Toulouse area in south-west France for refreshment . There she stayed until two days after the Allied landing in Normandy on June 6, 1944. On the march from Toulouse to the north, the division was repeatedly involved in battles with the French resistance . Units of the division carried out the massacres in Tulle and Oradour-sur-Glane (declared as " atonement "), in which they murdered several hundred civilians. After the war, numerous members of the division had to answer to a French court and were sentenced to long prison terms (see also Heinz Barth ).

During the Battle of Normandy and on the retreat from France, the division again suffered heavy losses and had to be refreshed in Paderborn in October 1944. There she prepared for participation in the Ardennes offensive in December 1944. After the failure of the offensive and persistent resistance in the winter of 1944/45, the division and other SS divisions were relocated to Hungary in March 1945 for the "Spring Awakening" company . After the failure of this offensive, the division had to go back to the defense and retreated fighting towards Austria , where it took part in the Battle of Vienna , among other things . At the end of the war in the Linz area, the bulk of the division went into American captivity; other units laid down their weapons at Rokycany and Dresden .

During the Second World War, the division committed numerous war crimes in various arenas on the Eastern and Western Fronts. This makes it clear once again that the Waffen-SS associations played an essential role in the exercise of Nazi terror.

War crimes committed by the SS regiment “Germany”, for example, have been clearly documented for the deployment in the Balkans in April 1941 - retaliatory measures against partisans and the murder of civilians. During the first combat operations in the course of the attack on the Soviet Union in June 1941, the shooting of Russian prisoners of war by units of the division was obviously the order of the day. Next that units of the Division is busy in the summer of 1941 in the room Minsk the Einsatzgruppe B supported with systematic mass murder:

“A major action against Jews was carried out in the village of Logoisk [now Lahojsk ]. In the course of this action, 920 Jews were executed with the support of a command from the SS Division Das Reich. The place can now be described as free of Jews. "

The massacre in this town between Minsk and Borissow , which was carried out on September 9, 1941 by the "Einsatzkommando 9" and the Waffen-SS, marks the beginning of a countless series of murders in which the majority of the Jewish population lived between September and December 1941 Eastern Belarus fell victim. Again and again the murder squads received support not only from the Waffen-SS, but also from units of the Wehrmacht .

After being transferred to southern France in the spring of 1944, the 2nd SS Panzer Division "Das Reich" was increasingly deployed in the fight against units of the French Resistance and, through unusually brutal reprisals and attacks on the civilian population, who were accused of cooperating with the Resistance, talk about yourself. The events lead to the conclusion that the division, which came directly from the Eastern Front, was a brutalized and extremely violent formation. The military historian Peter Lieb emphasized that the officers and non-commissioned officers in particular had been strongly influenced by their previous combat missions and experiences of violence and consisted for the most part of convinced National Socialists who now also applied their usual procedures from the war of annihilation against the Soviet Union in France. As early as May 21, 1944, there was a reprisal in the town of Frayssinet-le-Gélat ( Département Lot ), in which 15 French civilians were murdered. Also on May 21, 1944, all men between the ages of 16 and 60 were deported to Germany in Lacapelle-Biron ( Département Lot-et-Garonne ) on orders from units of the division. After the Allies landed in Normandy on June 6th, sub-formations of the 2nd SS Panzer Division "Das Reich" were first set off on June 8th in the direction of the invasion front. On their way north, the associations left a veritable trail of blood. Division commander SS Brigade Leader Heinz Lammerding had openly called for uncompromising action by the units against "terrorists". On June 9, units of the division reached the city of Tulle ( Corrèze department ), which was occupied by resistance fighters . After French partisans had previously attacked German soldiers and, as a result, desecrated bodies, 99 arbitrarily selected innocent civilians who had nothing to do with the events were hanged in retaliation and 200 civilians were sent to Germany deported. One day later, on June 10th, units of the 1st Battalion of SS Panzer Grenadier Regiment 4 "Der Führer" under the command of SS-Sturmbannführer Adolf Diekmann occupied the village of Oradour-sur-Glane ( Haute-Vienne department ) and carried out their actions there a massacre that killed 642 civilians. Also on June 9 and 10, members of the Division murdered 67 civilians in the city of Argenton-sur-Creuse ( Indre department ) (see the Argenton-sur-Creuse massacre ). The parts of the division initially remaining in the south of France continued their terrorist actions: In the course of a "gang operation" from June 10th to 12th in the Pyrenees region ( Haute-Garonne or Haute-Pyrénées ), which was supposed to be directed against partisan groups and which the III. Battalion of the SS Panzer Grenadier Regiment 3 "Germany" under the leadership of SS-Sturmbannführer Helmuth Schreiber , a total of 107 French civilians - men, women and children - were massacred.

Divisions of the Waffen SS