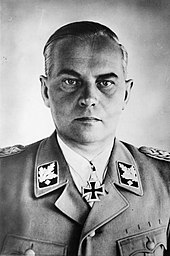 Felix Steiner, here in the rank of SS group leader and lieutenant general of the Waffen SS (1942)

The son of a grammar school teacher entered the Prussian army as a one-year volunteer in March 1914 and became a flag junior in the infantry regiment “von Boyen” (5th East Prussian) No. 41 in Tilsit . In this association he took part in World War I from August , was seriously wounded in November 1914 and, after his recovery, was promoted to lieutenant on January 27, 1915 . Until 1918 he took part in various campaigns in the southern theater of war and on the eastern front and was promoted to first lieutenant on October 10, 1918 . Steiner received both classes of the Iron Cross and the Wound Badge in black for his achievements .

In 1919 he joined an East Prussian Freikorps and was accepted into the Reichswehr in 1921 , which he left in 1933 as a major . He now joined the NSDAP ( membership number 4.264.295) and its party militia SA . There he was employed by the “Chief of Training” and, according to his own information, wrote under a pseudonym instructions for the military training of the SA, which should be used as a replacement for the Reichswehr as part of the planned restructuring of the organization into a “National Socialist Army” (Steiner speaks anachronistically in his memory of "a new Wehrmacht").

After the SA was disempowered , Steiner switched to the SS in 1935 (SS No. 253.351). There he took over on July 1, 1936, as SS-Standartenführer, command of a regiment of the SS disposable troops , the SS-Standarte "Germany" , which had been founded shortly before .

In October 1936 Steiner became a military instructor at the SS Junker School in Bad Tölz. There he met Cassius Freiherr von Montigny in April 1938 , who exercised the function of a " tactics instructor " and had similar training views as he did.

Steiner took part in the occupation of Czechoslovakia in 1938 as well as in the attack on Poland and the western campaign in 1940 with his SS standard "Germany" . For his work in the western campaign he was awarded the Knight's Cross of the Iron Cross on August 15, 1940 . After his promotion to SS Brigadefuhrer on November 9, 1940, Steiner was appointed commander of the SS division "Wiking" on December 1 , which he also commanded during the attack on the Soviet Union . On January 30, 1942, he was promoted to SS-Gruppenführer and Lieutenant General of the Waffen-SS and was awarded the German Cross in Gold on April 22, 1942 and the Oak Leaves to the Knight's Cross of the Iron Cross on December 23 , 1942 (159th award).

From November 21, 1942 to January 2, 1943, Steiner was the commanding general of the III. Panzer Corps to which the SS “Wiking” division also belonged. On March 30, 1943 he took over the supreme command of the newly formed III. (Germanic) SS Panzer Corps . At the end of October 1944 he had to give up command due to illness. On August 10, 1944, he was awarded the swords for the Knight's Cross of the Iron Cross (86th award). Recovered, he became Commander in Chief of the 11th Army in Pomerania . At the end of March 1945 he was appointed commander of the "Steiner Army Group", which basically existed only in theory, with which he was supposed to relieve the encircled Berlin from the north . Rudolf Nadolny (1873–1953), former German ambassador in Moscow and currently landowner at Katharinenhof near Gransee, convinced him to leave the town of Gransee with the troops these days. As a result, the city was surrendered almost without a fight. As in this case, he failed to carry out the de facto non-executable relief operation on several front areas in North Berlin, which is why he was relieved of his command on April 27, 1945 for refusing to obey. On May 3, 1945 Steiner went into American captivity on the Elbe , from which he was released on April 27, 1948.

In addition to the former Reichswehr General Paul Hausser , Steiner was one of the key people involved in building up the Waffen SS . The expansion of the SS available troops, as the military SS units were initially called, into a regular army took place after the National Socialists took power and eliminated the SA. The Waffen-SS always remained a political army that Hitler had created at his personal disposal.

Steiner was one of the few former officers on whom the Reichsführung SS could rely when building military structures in the Waffen SS. Steiner formed a counterweight to Hausser, who was more attached to the general staff thinking of the old Prussian army. Based on his experience at the front, Steiner introduced training and management structures based on a new deployment concept. The most important tactical combat units were no longer to function as large units, but rather shock troops , which enabled more agile warfare. This was to prevent trench warfare like that of the First World War. In addition, Steiner no longer relied on previous academic training and theoretical training in driver training, as is still common in the Wehrmacht , but on sports training and physical fitness.

In the course of the Nuremberg Trials , allegations against Steiner for crimes against humanity and other war crimes were dropped.

In the 1950s, Steiner held leadership positions in several institutions founded and financed by the Central Intelligence Agency . In addition to being a member of the editorial team of the German Soldier Newspaper , he was also one of the leading personalities of the Society for Military Studies . At the beginning of the 1950s Steiner was a leading member of the mutual aid community of the members of the former Waffen-SS (HIAG); In 1953 he was a member of the presidium of the federal liaison office of HIAG. Steiner, like Paul Hausser and Herbert Otto Gille, was an opponent of a nationwide organization of the HIAG and preferred a joint organization of veterans of the Wehrmacht and the Waffen SS in the Association of German Soldiers (VdS). Around November 1955, Steiner left HIAG in a dispute. Previously, he probably wanted to tie the HIAG to the All-German Bloc / Federation of Expellees and Disenfranchised (GB / BHE) party politically.

In the period that followed, Steiner wrote several books, including Die Freiwilligen, published in 1958 by right-wing extremist Plesse Verlag . In the publication he tried to glorify the Waffen SS as part of a "volunteer movement", to whose roots he counted war volunteers such as the Lützow Freikorps , the storm battalions of World War I or Walter Flex . In Army of the Outlaws , also published by Plesse-Verlag in 1963, he tried to portray the Waffen SS as a victim of the Allies' arbitrary retaliation policy, which was supported by opportunistic legislation in the Federal Republic. In addition, the Waffen-SS had been “betrayed” by the SS leadership, as they had integrated the concentration camp guard units into the Waffen-SS and thus brought them into connection with the National Socialist crimes. Heinrich Himmler evaded this responsibility by suicide at the end of the war , Steiner said. He also wrote several novels, many of which are set in World War II .

Knight's Cross of the Iron Cross with oak leaves and swords