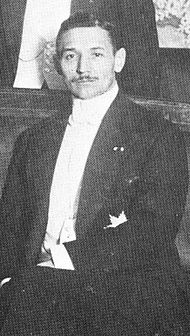 Rudolf Nadolny was born as the son of the landowner August Nadolny and his wife Agnes, b. Trincker, born in Groß Stürlack near Lötzen . In 1905 he married Änny Matthiessen (1882–1977), the daughter of a Berlin merchant. The writer Burkhard Nadolny (1905–1968) is both son, the writer Sten Nadolny his grandson.

Nadolny attended the Progymnasium in Lötzen and the Herzog-Albrechts-Schule (Rastenburg) , where he passed the Abitur in 1892. He then served as a one-year volunteer with the Grenadier Regiment "King Friedrich Wilhelm I." (2nd East Prussian) No. 3 in Rastenburg . He then took his law studies at the Albertus University in Königsberg . He became a member of the Königsberg Association of German Students . He wrote the color song of the covenant. After his exams in autumn 1896, he was a trainee lawyer at the district court of the small town of Rhine .

After the assessor exam in the summer of 1901, Nadolny initially worked as a judge in Königsberg . In April 1902 he was appointed to the Foreign Office in Berlin . He began his diplomatic career in 1903 as Vice Consul at the Consulate General in Saint Petersburg . Nadolny married Änny Matthiesen in 1905. They had three children: Burkhard , Ursula and Anorte. In 1907 he returned to the Foreign Office, where he was mainly entrusted with trade policy tasks as a Legation Councilor . Between 1912 and 1914 he took on diplomatic missions in Persia , Bosnia and Albania .

At the beginning of the First World War he made himself available to the military. He was initially assigned as an adjutant to the Guard Grenadier Regiment No. 5 . His job was to monitor internees in Ruhleben . In the autumn of 1914 he was called up to the intelligence department of the Deputy General Staff and in the spring of 1915 he was appointed head of the newly established Politics section of the General Staff of the Field Army. One of the tasks of his department was to identify and observe potential cooperation partners and already existing organizational structures and networks of anti-colonial groups in Europe and North America in cooperation with the Foreign Office and the intelligence agency for the Orient. To this end, the department supported the formation of independence committees that were to be controlled by the German side.

July 1916 Nadolny was the Foreign Office as charge d'affaires to Kermanshah sent to Persia, where he led the delegation headed. There was a "provisional Persian government" supported by the German Empire under the leadership of Reza Qoli Khan Nezam al Saltaneh . With his activities, Nadolny was supposed to secure the independence of Iran, which was occupied by Russian and British troops after the initiation of the First World War . Nadolny organized the financial and military support of the Persian Gendarmerie under the leadership of Colonel Pesyan as well as the financial support of Wilhelm Wassmuss , who had built up a resistance movement against British troops in southern Iran. After the defeat of the Ottoman troops against British units in the Battle of Baghdad on March 11, 1917, the German legation in Kermanshah had to be given up, whereupon the Persian resistance against the Russian and British troops collapsed.

After the dissolution of the legation, Nadolny returned to Berlin and was a consultant for Ostpolitik in the Foreign Office until 1919. During this time, the report kept contact with the Russian Bolsheviks in Switzerland through von Bergen and ensured that "Lenin and his comrades were smuggled through Germany by the highest army command in April 1917". In the subsequent peace negotiations with the Bolsheviks, which ended with the Brest-Litovsk peace treaty , Nadolny was part of the negotiating delegation headed by Richard von Kühlmann .

In the Weimar Republic he first became head of the office of Reich President Friedrich Ebert and is said to have induced him to declare the Deutschlandlied to be the national anthem . In January 1920 he was appointed envoy in Stockholm . From 1924 to 1933 he was ambassador to Turkey . In 1932/1933 Nadolny also headed the German delegation at the Geneva Conference of the League of Nations on disarmament . On June 1, 1932, Konstantin von Neurath became foreign minister in the barons ' cabinet , and Nadolny was appointed ambassador in Moscow in August 1933 .

After eight months he made this position available at his own request. In doing so, Nadolny was not guided by a fundamental rejection of National Socialism. He did not agree with the anti-Soviet foreign policy of the National Socialist government. After a dispute with Hitler, he was dropped by the Foreign Minister. His resignation was a courageous step and the second and, until 1939, last farewell for a top diplomat. From then on he devoted himself to agriculture on Gut Briesen ( district Templin ) in the Uckermark and on the fruit estate Katharinenhof near Gransee ( district Ruppin ).

After the end of the Second World War , Nadolny was committed to the national unity of Germany. At the request of leading figures of the German Red Cross, he took over the reorganization of the DRK in Berlin in June 1945 as the successor to Ernst-Robert Grawitz . His efforts were unsuccessful. When the Allied occupying powers dissolved the DRK in October 1945, Nadolny resigned from his position as chairman of the DRK.

After the establishment of the two German states, he advocated an understanding between the Federal Republic on the one hand and the GDR and the Soviet Union on the other. Together with Andreas Hermes, he was one of the leading politicians in the “Godesberg Circle” and participated in the “Society for the Reunification of Germany”. Nadolny lived in Rhöndorf from 1949 . He died at the age of 79 in a hospital in Düsseldorf-Benrath .

“Even if a society limited to a small circle fails, reunification has now become a matter for the entire German people. It will assert itself with historical necessity, and no power in the world will be strong enough to prevent it in the long run. "