Richard von Kühlmann (born May 3, 1873 in Constantinople , † February 6 , 1948 in Ohlstadt , Upper Bavaria ) was a German diplomat and industrialist. He was best known as State Secretary in the Foreign Office of the German Empire during the First World War (August 1917 to July 1918) and as negotiator of the German delegation in the negotiations on the peace treaty of Brest-Litovsk , which ended the war between Germany and Soviet Russia in March 1918 .

Richard von Kühlmann came from a Franconian family. His father Otto von Kühlmann (1834–1915) was a lawyer , member of the Bavarian Chamber of Deputies , later head of the operating company of Chemins de fer Orientaux in the European part of the Ottoman Empire and general director of Chemin de fer Ottoman d'Anatolie . His mother was Anna, née Freiin von Redwitz-Schmölz (1852-1924), daughter of the poet Oskar Freiherr von Redwitz and his wife Mathilde, née Hoscher. The father established the nobility of the Kühlmann family when he was raised to hereditary nobility on June 15, 1892.

Richard spent his early childhood in Constantinople. There he attended a German school . In his memories he found the father's strictness positive, especially with regard to the early training of his language skills in English and French. During his early trips to Germany, he was influenced by the historical stories of his grandfather Oskar von Redwitz. Richard von Kühlmann studied law at the Universities of Leipzig University , the Humboldt University of Berlin and the Ludwig Maximilians University in Munich .

After graduating as Dr. jur. in 1896, military service with the Bamberg Uhlans and the 2nd state examination in 1899, Kühlmann entered the diplomatic service in 1899 . He was initially employed as the legation secretary at the German embassy in Saint Petersburg and later came to the German embassy in Tehran , where he recognized the gradual rapprochement between Great Britain and Russia that was taking place at that time .

At the time of the first Moroccan crisis in 1905, Kühlmann was employed at the embassy in Tangier . He caused a public sensation as the companion of Kaiser Wilhelm II during his shore leave in Tangier, which France - which saw Morocco as its area of ​​influence - perceived as a provocation. Therefore, the imperial action expanded into an international affair.

1906 Kühlmann legation in The Hague and in 1908 as Counselor at the German Embassy in London added, where he remained until the outbreak of World War I remained active 1914th Like the ambassadors von Metternich and von Lichnowsky, he advocated a German-English compromise at this time. According to Kühlmann, this should be brought about without the leverage of the armament of the fleet . At the end of 1913, on behalf of the Reich government, Kühlmann negotiated with representatives of the British Foreign and Colonial Ministries about a future division of the Portuguese and Belgian colonies in Central Africa . The agreement he negotiated met with the approval of the Berlin government and was signed by State Secretary of the Reich Colonial Office Wilhelm Solf in October 1913 . In terms of content, the two contracting parties agreed that Germany would in future be entitled to Angola , except for the border area with Northern Rhodesia , as well as São Tomé and Príncipe , while England should receive southern Mozambique . 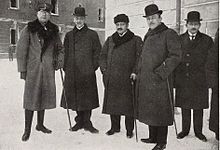 Kühlmann, who was already more influential than the German ambassadors in London, was deployed to special missions in Sweden and the Ottoman Empire after the war began . In April 1915, as envoy in The Hague, he was first entrusted with the management of a German mission abroad. The post in the neutral Netherlands was considered to be one of the most important, as the country was an essential "windpipe" for supplying Germany. The Netherlands was also an important arena for the propaganda debate with the Entente . The initiation of an active cultural policy and propaganda under Kühlmann is considered an important factor for the stabilization of the German-Dutch relations, which were damaged after the invasion of Belgium .

In October 1916, Kühlmann was appointed ambassador to Constantinople. He managed to enable the sculptor Georg Kolbe to work there.

From August 5, 1917 to July 9, 1918, Kühlmann was State Secretary in the Foreign Office (corresponds to the Foreign Minister in today's parlance). In this role he advocated German subsidies for Pravda , the party journal of the Bolsheviks , who after the February Revolution advocated Russia's immediate withdrawal from the war. When this goal was achieved after the October Revolution , he negotiated the " peace of bread " with Ukraine and the peace treaty of Brest-Litovsk with Soviet Russia on behalf of the civil government . In doing so, he acted moderately towards the Third Supreme Army Command , without achieving the desired result.

Kühlmann rejected Erich Ludendorff's demands for state recognition of Livonia , Estonia and Georgia and the shifting of the eastern border - these contradicted the peace treaty with Soviet Russia - but could not enforce his argument that the great power Russia would always develop a need to expand into the Baltic provinces. With this in mind, on March 9, 1918, he said to Chancellor Georg von Hertling : “A complete cut off of Russia from the Baltic Sea, and the constant threat to its capital at close range are a condition that will create and with absolute certainty a permanent German-Russian conflict must lead to a future war. ” Kühlmann viewed the ambitious expansion plans of the German generals in the east with skepticism: the worse they are in the west, the better off they are in the east .

The execution of the Brest-Litovsk agreement was marked by bitter disputes between Kühlmann on the one hand and the OHL - and there in particular Erich Ludendorff - on the other. Kühlmann's “Eastern Concept” read: No engagement in the East, but as much concentration of all forces as possible in the West, taking into account relations with Austria-Hungary , public opinion in Germany and the decisive Western offensive. Committed to this view, he resisted Ludendorff's plan to resume hostilities with Russia in February. Since Russia was not a military threat in Kühlmann's eyes, he turned against the idea of ​​the OHL and Kaiser Wilhelm to eradicate Bolshevism by marching on Saint Petersburg. His main argument was that it was precisely thanks to Bolshevism that Russia was in a favorable state of weakness and military powerlessness for Germany. In addition, according to Kühlmann, the rule of the Bolsheviks, in addition to internal fragmentation, also guarantees Russia's further inability to form an alliance. This assessment led Kühlmann to the judgment that the Western powers could never accept a Germany strengthened by Russia's potential, on the contrary, a German policy of expansion and annexation in the east would induce the war to continue “à outrance”. The fact that Wilhelmstrasse was finally able to prevail against the OHL in its refusal to intervene in revolutionary Russia was less because they were convinced by Kühlmann's arguments than because they no longer had troops for one because of the fighting on the western front had such action available.

In the summer of 1918, Kühlmann, a proponent of a compromise peace, tried to initiate secret negotiations with Sir William Tyrrell in the Netherlands in order to bring the war, which in his eyes could no longer be won, to a tolerable end. Kaiser Wilhelm II, who initially met the approach with goodwill, eventually rejected it under pressure from the Supreme Army Command. After a speech in the Reichstag in June 1918, in which Kühlmann cautiously doubted an exclusively military victory and suggested a settlement with Great Britain by negotiation, the Supreme Army Command forced his resignation.

After the First World War, Kühlmann retired from the diplomatic service, wrote books and was estate manager in Ohlstadt. In addition, as owner representative for the Stumm family , he was a member of several supervisory boards in the steel industry.

After the death of his first wife in June 1917, on March 4, 1920, Kühlmann married Marie-Anne von Friedlaender-Fuld , the daughter of the industrialist Fritz von Friedlaender-Fuld (1858–1917) and Milly Fuld, letter partner of the poet Rainer Maria Rilke ( 1875-1926). This marriage was divorced on April 13, 1923 in Munich. In 1928, Kühlmann took over the chairmanship of the German Cultural Association .

As early as 1932, Kühlmann was collecting material for his “Memories”, but he did not work intensively on it until 1939/40 at the earliest. His private archive burned in a bomb attack on Berlin in November 1943. He had been able to bring parts of his art collection to safety outside of Berlin. Kühlmann finished the manuscript in September 1944. In connection with the assassination attempt on Adolf Hitler on July 20, 1944 , he - like many officials from the German Empire and the Weimar Republic - was arrested in October 1944, the GeStaPo confiscated the remaining documents. It was not until the summer of 1947 that he gave the manuscript to the publisher. He did not live to see it appear; he died before the first corrections were made.

Richard von Kühlmann has found his final resting place in the Kühlmann-Stumm hereditary funeral in Ramholz .

Wolfgang Schadewaldt portrayed him as follows:

"Richard von Kühlmann was always an open minded mind, had a wide range of interests, a dignified literary connoisseur and a clever art lover [...] His social fluency, his entertainment skills were not only in the foreground in dealings with diplomatic and courtly circles, but they always have them Acquired sympathy and friendship. Political conversation was the strongest side of his being: he seeks open discussion [...] He lacked the great political passion that strives to assert itself at any price and thus achieves its goal. He sees what is necessary, tries to enforce it, beyond the will of the decisive factors, but he steps aside if they do not follow him. He doesn't feel like a fighter [...] "

State Secretaries in the Foreign Office of the German Empire