Entrance building of Istanbul Sirkeci station, terminus of the Orientbahn from 1890 to 1937

The Compagnie des Chemins de fer Orientaux (CO or CFO, Turkish Rumeli Demiryolu or İstanbul-Viyana Demiryolu ), often referred to as the Orientbahn or Oriental Railway in German-speaking countries , was a private railway company that existed from 1870 to 1937. They built and operated railway lines in the European part of the Ottoman Empire . 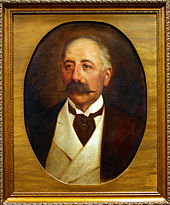 During the time of the Tanzimat reforms, the Ottoman Empire strove to modernize its infrastructure as well. After individual railway lines were built in the Asian part of the empire as early as 1860, Sultan Abdülaziz pursued plans to build railway lines in Rumelia , the European part of the Ottoman Empire. Therefore, on May 31, 1868, he granted the Belgian company Van der Elst et Cie. the concession for a railway line from Constantinople to Vienna , or to the border between the Ottoman Empire and Austria-Hungary . Van der Elst soon ceded the concession to the French investor Langrand-Dumonceau. Since he could not raise the necessary financial resources for the construction either, the concession expired and was taken over by Baron Moritz von Hirsch on April 17, 1869 .

Von Hirsch received the concession to build and operate a total of four routes for 99 years:

The main route was supposed to avoid Serbian territory, as Serbia was only a nominal part of the Ottoman Empire at that time. Austria-Hungary also favored this route. The planned network comprised a total of around 2,500 km. The concession also included an annual yield guarantee of 14,000 francs per kilometer of constructed route for Hirsch , which led to the inaccurate rumor that the route from Constantinople to the west would have been built with particularly winding curves in order to achieve high profits.

The construction was carried out by the Société Impériale des Chemins de Fer de la Turquie d'Europe, newly founded by Hirsch, based in Paris , while Wilhelm Pressel , who had previously worked for the Austrian Southern Railway Company , took over the post of chief engineer . The operation was originally to be carried out by the southern runway. After the negotiations had failed, Hirsch founded the Société Générale pour l'Exploitation des Chemins de Fer Orientaux (abbreviated CO) as an operating company in January 1870 . Pressel quickly began construction, simultaneously in Constantinople, Dedeagach, Thessaloniki and Dobrljin. As early as 1872, around 500 km of track were in operation.

The CO as a pure operating company

Map of the Vienna – Istanbul railway connection completed in 1888. The route network of the Orientbahn is shown in red.

The new Grand Vizier Mahmud Nedim Pascha began negotiations again with Baron von Hirsch in 1870 in order to achieve better conditions for the Ottoman Empire. As a result, the operating rights remained with the CO, the Ottoman Empire took over the further construction of routes. In 1874, CO was already operating on three subnetworks that were still isolated from one another with a total of around 1,300 km route length:

As early as 1873, the Orientbahn had taken over the operation of the railway line from Ruse to Varna , which was completed in 1866 and owned by an English company .

Due to the bankruptcy of the Ottoman Empire in 1875, further construction of the lines came to a standstill. The uprisings of the Balkan peoples against Ottoman rule and the Russo-Turkish War brought railway construction to a complete standstill from 1877 onwards. The Sandschakbahn did not get the planned connection to the Austrian network, which is why the CO ceased operations on the line in 1876 after a few years of high-loss operation. After the war, it was taken over by the Austro-Hungarian military railway Banjaluka – Dobrlin . In contrast, the Ottoman Empire was able to benefit considerably from the transport of troops from the already completed route between Istanbul and Plovdiv.

Effects of the Berlin Congress

The Orient Express on the Orientbahn route near Constantinople with a class 101–116 locomotive, colored postcard from around 1900

The former Edirne station, built in 1890 under the aegis of the Orientbahn (replaced by a modified route in 1971)

In 1878, the Berlin Congress decided to continue building the rail link from Istanbul to Vienna and set up a separate committee for this purpose. This Conference à Quatre , consisting of representatives from Austria-Hungary, Serbia, Bulgaria and the Ottoman Empire, was required to complete the continuous connection within three years. In 1880 the four states concluded the corresponding convention, according to which the connection between Istanbul and Vienna should be established via Sofia and Belgrade. Part of the agreement was the continuous connection from Belgrade to Thessaloniki. The original planning of the route from Niš via Pristina to Sarajevo and on to the border to Austria-Hungary was abandoned.

The Orientbahn, which had moved its headquarters from Paris to Vienna in 1878 and has since operated as Compagnie d'exploitation des chemins de fer Orientaux , took over the construction of the missing sections on Ottoman territory, essentially the section from Belovo to Vakarel , on the new one Border between the independent Principality of Bulgaria and the province of Eastern Rumelia, which is nominally under Ottoman suzerainty . The Serbian section was built by a French private company, which was replaced by the newly founded Serbian State Railways (SDŽ) in 1889 after various financial problems . In Bulgaria, the newly founded Bulgarian State Railways (BDŽ) took over the construction and operation of the missing sections. BDŽ also acquired the previously isolated route from Russe to Varna from CO.

The continuous connection from Turkey to Central and Western Europe was finally completed in 1888, as was the closing of the gap between Niš and Üsküb ( Skopje ). On August 12 of this year, the Orient Express ran for the first time continuously from Paris to Constantinople, but initially only once a week. At the same time, the so-called convention train from Vienna to Constantinople was introduced as a normal express train , which not only carried sleeping cars but also seating cars. In 1890 the CO inaugurated its new terminus in Constantinople, today's Istanbul Sirkeci station .

After the Bulgarian route sections west of Belovo were handed over, the CO network covered around 1,265 km.

In 1894, the CO also took over operations on the Thessaloniki - Monastir railway line , which had been built by a German company since 1891. In 1913, the CO acquired the majority of shares in this railway.

In 1908, after a strike by Orientbahn employees, the Bulgarian state railway BDZ took over ownership and operation on the Bulgarian sections of the Orientbahn. The latter received compensation of around 41.5 million francs for this. Four years later, the CO opened its last new line, a 45 km long branch line from Alpullu to Kırkkilise .

Baron Hirsch withdrew from railway construction in Turkey from 1889. In April 1890 he sold his shares in CO to Deutsche Bank and the Wiener Bankverein . Then the Bank for Oriental Railways , or Orient Bank for short, was founded, which is one of the oldest financing companies in the world. In addition to the aforementioned financial institutions, the Swiss Credit Authority (SKA), Basler Handelsbank (today part of UBS ), the Eidgenössische Bank (also part of UBS), as well as other French, English and Austro-Hungarian donors were involved in the Orientbank . The administrative seat of the Orientbank was in Vienna, but the administration was carried out by the SKA in Zurich and the accounting was carried out in Swiss francs . The company had a share capital of 50 million Swiss francs, of which only 20% was initially paid in. For a time, SKA was the main shareholder of Orientbank and sent its two managers Julius Frey and Wilhelm Caspar Escher to the board of directors. However, before the outbreak of World War I in 1913, SKA sold its shares in Orientbank to an Austro-Hungarian group of buyers who were close to the relevant government.

The CO itself stood from the turn of the century until 1917 (according to other sources 1918) under the leadership of the two Swiss Ulrich Gross and Jakob Müller, who were referred to as Türken-Ueli and Türken-Müller in their homeland . They brought in more railway employees and railway engineers, so that up to the outbreak of the First World War, a few Swiss railway employees could be found at almost every railway junction.

The Balkan wars led from 1912 to significant changes in the ownership and operating conditions of the Orient train tracks. After the Treaty of Bucharest was concluded in 1913, the Orientbahn still had the following routes:

The outbreak of World War I ended with no result in negotiations to retransmit the now Serbian lines north of Gevgelija . Mainly military transports now rolled over the routes of the Orientbahn, as it represented an important transport axis for the Central Powers . With the participation of the Orientbahn, the Balkan train also drove from Berlin to Istanbul , which served the traffic of high-ranking military and diplomats of the Central Powers.

The end of the Chemins de fer Orientaux

After the end of the First World War, the Greco-Turkish War followed from 1919 to 1922, so that a temporary solution to the complicated border, ownership and operating conditions on the Orientbahn routes was only possible after the Treaty of Lausanne in 1923. The Orientbahn was still nominally in German ownership, the solution of the property issue dragged on until 1929. From this year a new company, the Compagnie de Chemin de fer Franco-Hellenique (CFFH), based in Paris, took over the now Greek part of the Istanbul - Svilengrad line, including the short section through the Edirne train station that remained in Turkey and the branch after Dedeagatsch (from 1920 Alexandroupoli ). The CFFH remained independent until 1955 when it became part of the Greek State Railways. The Turkish section from the new border station Uzunköprü to Istanbul remained with the Orientbahn, which was also transferred from German to French ownership in the course of the reparations, including the branch line to Kırkkilise (from 1924 Kırklareli ).

As one of the last private railways in Turkey, the CO was only nationalized in 1936. With effect from January 1, 1937, the Turkish state railway Türkiye Cumhuriyeti Devlet Demiryolları (TCDD) took over the routes and all the equipment of the Orientbahn for compensation of 20.6 million Swiss francs .

Former locomotive 407 of the Orientbahn