The title of this article is ambiguous. Further meanings are listed under Sivas (disambiguation) .
Template: Infobox location in Turkey / maintenance / district

Sivas ( Armenian Սեբաստիա Sebastia , Kurdish Sêwas , Greek Σεβάστεια Sebasteia , Latin Sebastea ) is the capital of the Turkish province of the same name in Central Anatolia and at the same time the center of a district directly subordinate to the governor (Vali), the central district ( Merkez ). The city is located about 450 kilometers by road (as the crow flies: 350 km) east of the state capital Ankara . According to the city seal, Sivas has been a Belediye (municipality) since 1828 .

The district has the highest population density (108.2 inh. Per km²), almost five times the provincial value of 23.00. The urban population is 92.96 percent.

There are various statements about the origin of the name:

According to folk tales, the name could have come about as follows:

The population consists mainly of Turks and a small part of Kurds . Up to the beginning of the 20th century, Armenians and Pontic Greeks with Christian faith lived in Sivas . See: Treaty of Lausanne

In 1914 Sivas had around 45,000 inhabitants, more than a third were Armenians , the rest Greeks and Turks.

The following table shows the comparative population level at the end of the year for the province, the central district and the city of Sivas as well as the respective share at the higher administrative level. The figures are based on the address-based population register (ADNKS) introduced in 2007.

The following population information about the city, the district, the province and the country is available for the censuses:

Facade of the Pasha Mosque

In Sivas today, Islam is the main religion. About 81% of the population in Sivas are Sunni Muslims, 18% are Alevis , and the remainder is made up of Jews , Christians and others. The Armenian Apostolic Congregation in Sivas had six churches (Meryemana, Surp Sarkis, Surp Minas, Surp Prgitsch, Surp Hagop, Surp Kevork), four monasteries ( Surp Nschan, Srup Hreschdagabed, Surp Anabad, Surp Hntragadar) in Sivas until the First World War Orphanage, a hospital and several schools. The Catholics had one church with the seat of the Metropolitan of Sebastea , the Protestants had two churches and eight schools.

The city of Sivas on an Ottoman miniature by Matrakçı Nasuh from his travel book from 1537.

Siva's first settlement ranges from 7000 to 5000 BC. BC back. The Hittites , whose settlement remains can be found near Topraktepe near Sivas, ruled there from 1600–884 BC. After that the Phrygians (800–695 BC) for about 100 years . The Phrygians were replaced by the Lydians . The Lydians lost the area to the Persians in 546 . The Persian Empire was subjugated by Alexander the Great , so that Sivas was ruled by the Diadochi until around 17 AD . Sivas was part of the Roman Empire until 395 , then byzantine until 1075 . Under Emperor Diocletian , Sivas was the capital of the province of Armenia minor .

After several years of negotiations, Emperor Basil II compensated Seneqerim John , King of Vaspurakan in southern Armenia , with the territory of Sebaste in Cappadocia in 1021 . Seneqerim Johannes moved with his court, the high clergy and 14,000 families to Sivas and administered it as a Byzantine vassal.

In the 11th century, the first Turkish tribes appeared in Anatolia . From 1142 to 1171 reigned Danishmends Dynasty about Sivas. In 1174 the Seljuks under Kılıç Arslan II conquered the city ​​and had the Ulu Cami (German: Great Mosque) built in 1197. Sivas served alongside Konya as the capital of the Seljuks. In 1232 Sivas, like large parts of Eurasia, was invaded by the Mongols . The Mongols were followed by the Beylik of Eretna , which was put to an end by Kadi Burhan al-Din . In 1398 the Ottomans under Sultan Bayezid I conquered the city ​​and lost it in 1400 to Timur , who destroyed the city. In 1403 the Ottomans managed to retake it. Sivas was the capital of the Ottoman Eyalets Rum until the late 19th century . From 1864 it became the capital of the now independent Vilâyets Sivas .

The Ottomans ruled the city until the First World War . In 1913 there was a boycott of Christian entrepreneurs and traders in the city. In April / May 1914, the Sivas market fell victim to a fire. On July 5, 1915, the deportation of the Armenian population from Sivas began. In 1915 the Armenian Sanasarian College, which was moved here from Erzurum in 1912, also closed . In this genocide , Sivas and its environs had the largest number of non-Muslims killed. The surviving Armenians who fled to Armenia founded the Malatia-Sebastia district in Yerevan .

After the defeat of the Ottoman Empire in World War I, a national resistance movement formed under Mustafa Kemal , which, with the Amasya circular and the resolutions of the Congress of Erzurum , demanded the complete independence and indivisibility of the occupied empire. For this purpose, representatives from all over the country were invited to Sivas, and Mustafa Kemal Pascha was elected chairman (Heyet-i Temiliye) . This group of 31 participants held the Sivas Congress from September 4 to 11, 1919 and formed the “Society for the Defense of the National Rights of Anatolia and Rumelia” ( Anadolu ve Rumeli Müdafaa-i Hukuk Cemiyeti ), one of the forces acting alongside the Ottoman government Association which, among other things, called for the withdrawal of foreign troops, complete independence and indivisibility of the country, new elections for the Ottoman parliament and the resignation of the Ottoman interior minister Damat Ferid , who was hostile to them .

The city was first connected to the Anatolian railway network in the 1930s. Investments in cement factories, ironworks and larger state farms followed. The rural exodus increased towards the end of the 1970s, and Istanbul in particular received a large number of internal migrants from Sivas.

Commemorative demonstration 2007 in Sivas about the Sivas massacre

On July 2, 1993, after Friday prayers, Islamic fundamentalists gathered in front of the Madımak Hotel, where, as part of an Alevi culture festival, mostly Alevi musicians , writers , poets and publishers , including children and young people, stayed. The hotel was set on fire while the pavement crowds stood by in the streets. Because of the angry, angry crowd in front of the hotel, people in the building could not go outside. Over 30 people were burned in the hotel; Few survived, including the author Aziz Nesin , who, according to various sources, had primarily targeted the attack. Although the police and fire brigade were alerted early on, they did not intervene for eight hours. The State Security Court in Ankara ruled that the large crowd had hindered the emergency services in the rescue work. The Alevis call this attack the Sivas massacre . Even if Sunnis and members of other religions were also killed in this incident, the Alevis see this event as a blow to the Alevi population. The event played an important role in raising awareness and organization. The incident has been commemorated in demonstrations since 2003, and demands are made to erect a memorial in the hotel. In 2003 around 500 people marched with them, in 2007 there were an estimated 20,000 with a high media presence and around 3,000 police officers.

Local public transport consists mainly of dolmuş and urban bus transport. Sivas owns a Sivas Nuri Demirağ airport , which has been in operation since 1957 and which is mostly used for domestic and seasonal international flights.

Sivas train station is located two kilometers southwest of the city center. Sivas forms an important junction in the east-west axis (Ankara-Erzurum-Kars) and the north-south axis (Samsun-Kayseri). A high-speed line between Ankara and Sivas is currently under construction (as of 2014). A railway connection to Divriği has been completed.

South of the city, the highways D850 ( Kayseri Sivas Yolu ) and D200 ( Sultan Şehir Bulvari ) cross, which connect the city with the neighboring provincial cities of Tokat, Kayseri, Erzincan, Elazığ and Malatya. The European route E 88 follows the course of the D200 in an east-west direction. 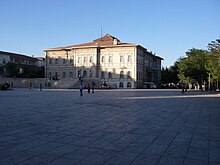 Sivas has many Seljuq buildings from the 13th century. These include the Seljuk “Blue Medrese” ( Gök Medrese ) from 1271, built by the Armenian architect Kaloyan, the “ Healing Medrese ” (Şifaiye Medresesi) from 1218 and the “Medrese with double minaret” (Çifte Minare Medresesi) from 1271 The oldest mosque in the city is the “Great Mosque” (Ulu Cami) from 1196. In the vicinity of Sivas are the ruins of the old Armenian Church of the Holy Cross ( Armenian Սուրբ խաչ ). It contained important relics such as the throne of the Arzruni kings of Vaspurakan .

Ottoman buildings are the Kurşunlu Hamamı bath from 1576, the Behrampaşa Hanı caravanserai from 1573 and the Eğri Köprü , the crooked bridge over the Kızılırmak ( Halys ) river in the southeast of the city.

In the congress building from 1919 is the Sivas Museum, which provides information about the congress, Ataturk and the ethno-geographical features of the region. Sivas is also famous for the Sıcak Çermik , Soğuk Çermik and Kangal Balıklı Kaplıca thermal baths . The Sivas Archaeological Museum houses objects from all periods from prehistory to the Hittite and Roman to the Ottoman period.

As in almost all Turkish cities, football is also very popular in Sivas . The city and the province of the same name are mainly represented in football by the first division club Sivasspor . This club was created in 1967 through the merger of several smaller clubs and then took part in the Türkiye 2. Futbol Ligi , the 2. Turkish league, which was founded only four years earlier . After the club struggled unsuccessfully for promotion to the Süper Lig , the 1st Turkish league, for four decades and in the meantime even relegated to the 3rd league, it achieved the long-awaited first division promotion in the summer of 2005 under the direction of President Mecnun Otyakmaz .

In addition to football, wrestling is also one of the popular sports in the city and the province. With Taha Akgül , Hamza Yerlikaya and Ahmet Ayık , the region has produced three very successful wrestlers and is considered a talent factory. Yerlikaya, who was inducted into the FILA International Wrestling Hall of Fame , is a native of Istanbul , but comes from a family that immigrated from Sivas and still has strong ties to Sivas. Between 2007 and 2011 he was elected to the Turkish parliament as a member of the AKP for the province of Sivas .