Ruins of the house of Kilij Arslan in Konya 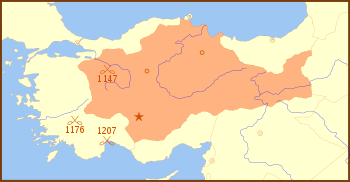 Sultanate of Rum (around 1190). The star marks the capital Konya (Ikonion), the year 1176 the site of the Battle of Myriokephalon

1159 Kilij Arslan attacked the Byzantine Emperor Manuel I Comnenus on, than this on the way back from negotiations with Nur ad-Din in Syria near its capital Iconium preferred. After Manuel I returned to Constantinople with his troops in 1159, Nur ad-Din attacked the Sultanate of Rum and was able to take Maraş and the fortresses of Cresson and Beherselin . Only one attack by King Baldwin III. the defenders-stripped area of Damascus prevented him from advancing further.

In 1161 Kilidsch Arslan was defeated by Manuel's nephew Johannes Kontostephanos and had to travel to Constantinople as a gesture of submission . In 1173 he allied himself - now in peace with Byzantium - with Nur ad-Din against Mosul . He also formed an alliance with Mleh , the king of Lesser Armenia , who was also in conflict with Byzantium.

The peace treaty with Byzantium lasted until 1175, when Kilidsch Arslan refused to cede territory recently conquered by the Danischmenden to Manuel. Both sides had prepared for a new armed conflict in recent years , but Kilij Arslan tried to enter into negotiations with Manuel, but he invaded the sultanate in 1176 with the aim of conquering the capital. The Sultan managed to guide Manuel's army into a valley near the destroyed Myriokephalon castle , where he defeated the Byzantines ( Battle of Myriokephalon ) and forced the emperor to razor the border fortifications.

In 1180 he took advantage of the instability of the empire after the death of Manuel and secured most of the southeastern coast of Anatolia . In the same year he allied himself with Saladin , Nur ad-Din's successor. In 1185 he made peace with the emperor Isaac II. The following year he transferred power to his nine sons, who immediately began to fight one another. Kilidsch Arslan was unable to stop the soldiers of the Third Crusade under Emperor Friedrich Barbarossa . He was defeated in May 1190 in the battles of Philomelion and Iconium .

Kilidsch Arslan died in 1192. His successor was Kai Chosrau I , while his other sons continued to fight for power in the various parts of the sultanate.