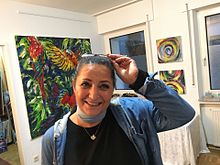 Serap Riedel in her studio in Duisburg in October 2016

Serap Riedel was born in 1960 in Sivas , Turkey, as the daughter of a Turkish civil servant who went to Germany as a guest worker in the late 1960s and moved to Germany in 1975 as part of a family reunification. She lives in Duisburg , and since 2013 also in Datça , Turkey.

Serap Riedel supports the integration of immigrants as well as the long-term care and promotion of alcohol and drug dependent women and men through art therapy work with those affected. She works in adult education as a lecturer in acrylic painting .

Riedel sees herself as an independent artist who converts impressions gained in life into artistic expression, depending on her mood, free of stylistic constraints. She sees her work in a continuous and progressive versatile creative process of constant renewal, which can find expression in both realistic and abstract representations.

Since 1990, after largely self-taught learning of various techniques and styles, she has created numerous works of art in a variety of techniques with a wide variety of topics, which are intended to express and evoke feelings, tell stories and ask questions. The visit to the Free Academy of Fine Arts in Essen in 2007 and 2008 with Bernard Lokai (master student of Gerhard Richter ) and Henning Bertram (master student of painting with Johannes Geccelli , Armando and Georg Baselitz ) encouraged them to break new ground. a. in the abstraction and representation of man.

She works with different stylistic means and uses different techniques: She works with oil and acrylic paints on paper and canvas, but is also open to other colors and surfaces, in different sizes, from the 10 by 10 cm miniature to the wall filling Large format. Since 2013 she has also been working with clay.

Since 2014 she has been supporting the UKKSA (Uluslararasi Knidos Kültür Sanat Akademisi - International Knidos Culture and Art Academy) as a guest artist.

In 2018 she illustrated the Turkish-German language children's book Elif ve Atlar - Elif and the horses by the writer Molla Demirel .

Since 2003 Serap Riedel has shown her works in exhibitions, mainly in public buildings, initially in the Duisburg / Essen area, since 2012 also beyond, and since 2014 also regularly in galleries in Turkey.