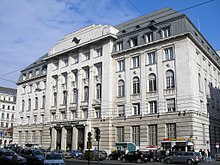 The Wiener Bankverein was a major Viennese bank founded in 1869 under the Danube Monarchy . He was in the context of the bank cleanup of the Great Depression in 1934 with the Creditanstalt merged.

Among the 14 banks operating in Vienna in 1888 , the Bankverein took fourth place in terms of capitalization after the Austro-Hungarian Bank , which was active as a central bank , the Österreichische Länderbank and the Creditanstalt.

The bank association was active in the founding business and was considered to be dominant in the financing of the iron industry in the Hungarian half of the empire . At the turn of the century, he was particularly keen to attract the savings of private customers. In the overcrowded banking landscape of the interwar period, the bank association was also ailing. However, it remained so important that the merger in 1934 led to the double name Creditanstalt-Bankverein, which had been used for decades. The monumental corporate headquarters of the bank association at the corner of Schottenring / Schottengasse , built between 1909 and 1912, became the main building of the CA. It was planned and built by the architects Ernst Gotthilf and Alexander Neumann .