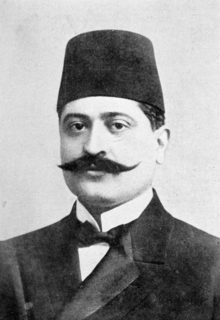 Mehmed Talât Pascha (according to today's Turkish orthography Mehmed Talat Paşa ; born September 1, 1874 in Kardschali / Edirne Province , today in Bulgaria ; † March 15, 1921 in Berlin ), was Minister of the Interior and Grand Vizier of the Ottoman Empire and leader of the Young Turks .

As Minister of the Interior, Talât ordered the arrest of Armenian intellectuals in Istanbul on April 24, 1915 , which initiated the genocide of the Armenian population in the Ottoman Empire.

Talât came from a small family and represented a social class that came to power in the Ottoman Empire with the Young Turkish Revolution of 1908. As a six-year-old he experienced the Russo-Turkish War of 1877/78 and the Russian occupation of his closer homeland. These childhood experiences shaped him and laid the seeds for the excessive nationalism that would run through his entire life. During his student days, he joined the nationalist wing of the Young Turk movement, which advocated a rescue of the Ottoman Empire against the threat of imperialist great powers.

Without leaving school, he was accepted into the civil service and pursued the career of a telegraph officer. At the same time he developed into a leading figure among the Young Turks, whose older generation of founders he pushed aside. The political activities of the Young Turks were directed against the government under Sultan Abdülhamid II , who had suspended the liberal constitution of the Grand Vizier Midhat Pasha from 1876. The struggle for basic civil rights culminated in an attempted coup in 1896 , but it failed. In 1906 Talât was a founding member of the Young Turkish Party Committee for Unity and Progress (İttihad ve Terakki Fırkası) and ensured that the Young Turkish movement gained more and more supporters in the Turkish officer corps at the turn of the century. In particular , he had close ties to his home garrison in Thessaloniki and promoted the rise of the young Ismail Enver .

Talât Pascha was a Freemason and as such the first Grand Master of the Grand Lodge of Free and Accepted Masons in Turkey . He was a Pomak Muslim and came from a Bektashi family.

Under the leadership of his friend Enver Pascha , there was an open rebellion in Thessaloniki in 1908, which the officers and men joined. The military superiority of the troops mobilized by Enver Pasha forced the government to resign. On July 24, 1908, Abdülhamid II had to reinstate the 1876 constitution , lift censorship and issue an amnesty . Talât moved into parliament as a member of the Adrianople government for the “Committee for Unity and Progress”. His party gained decisive influence over the newly formed government. On April 13, 1909, forces loyal to the saint attempted a coup against the takeover of power by the Young Turks, but the troops led by Enver Pascha and Cemal Pascha knocked them down after three days. Then the Young Turks dethroned Sultan Abdülhamid II and replaced him with his brother and heir to the throne Mehmed V , who swore loyalty to the constitution and accepted the new balance of power.

Talât Pascha (center) with the German General Max Hoffmann , the Austro-Hungarian Foreign Minister Ottokar Czernin and the diplomat Richard von Kühlmann during the negotiations on the Brest-Litovsk peace treaty

As the politically leading head of the “Committee for Unity and Progress”, Talât succeeded from 1909 in filling influential positions in the state with followers. In the course of the change in the Young Turkish program - whose originally democratic-parliamentary orientation, which included close cooperation with the minorities of the empire, was increasingly replaced by the idea of ​​a strict nationalist-Islamic dictatorship in view of the growing problems - Talât Bey himself stepped in 1911 joined the government as interior minister and tightened the Turkish nationalist orientation of the state. However, due to the military defeat in the Italo-Turkish war , the political persecution of oppositional forces at home and the state-sanctioned acts of violence against citizens who were not of Turkish nationality, the Young Turks lost power in July 1912. But already in January 1913 - in the middle of the First Balkan War of 1912/13, which brought another defeat to the Ottoman Empire - Talât organized a coup of the Young Turks against the new weak government in association with Enver and Cemal.

The coup was successful, Talât was again Interior Minister of the Ottoman Empire, which he ruled from then on together with Minister of War Enver Pascha and Minister of the Navy Cemal Pascha in a triumvirate with almost dictatorial powers. In contrast to the two military leaders of the Young Turks, Talât relied on the administration of the empire, which he has since systematically enforced with confidants in the provinces, and on an ideologically increasingly nationalistic core of the Young Turkish "Ittihad" party apparatus.

Unlike Enver Pascha, who sought a military alliance with the German Empire , Talât opted for a neutral foreign policy. However, he was unable to assert himself with his foreign policy ideas, so that the Ottoman Empire entered the First World War in autumn 1914 as an ally of Germany and Austria-Hungary .

Responsibility for the Armenian Genocide 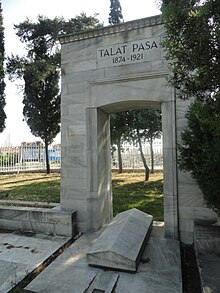 Tomb on the Abide-i Hürriyet memorial complex in the Şişli district of Istanbul for the person who was mainly responsible for the genocide in Turkey, who was sentenced to death

Talât, who remained Minister of the Interior of the Ottoman Empire until 1917, was as such the main person responsible for the genocide of the Armenians , which took place mainly in 1915/16 and was centrally organized by Talât with the help of the state administration, but also some secret organizations of his party . As Minister of the Interior, Talât issued the specific deportation orders , which were officially justified as the relocation of an unreliable minority due to the war, and at the same time unofficially ensured that these orders were actually understood and implemented as genocide orders. For this purpose, he set up an internal Young Turkish militia and at the same time used his powers as interior minister to eliminate reluctant governors and officials. The district administrators of Lice, Midyat, Diyarbakir and Beşiri as well as the governors of Basra and Müntefak were murdered or executed for this reason and replaced by supporters of a radical line. A well-known quote from Talât Pascha reads: “La question arménienne n'existe plus.” This saying, with which Talât had the expulsion and all measures against Armenians suspended at the end of August 1915, is documented in the files of the Foreign Office.

It was u. a. tried by Talât himself to relativize his responsibility: Interview in the Berliner Tageblatt (May 5, 1916):

“Unfortunately, bad officials, in whose hands the execution of these orders [deportation] was entrusted, responded to the unreasonable excesses in the process of doing their duty. These tragic events cost me more than one sleepless night. "

At the last congress of the Committee on Unity and Progress , Talât again admits incidents, but argues that these were exaggerated by the Armenian and Greek press (November 1, 1918):

“Many officials used force and force more than was necessary. In many areas, innocent people have been unjustly victims. I admit that. "

“The Hohe Pforte […] wanted to guarantee the security of the army and the population and took energetic measures to put a stop to these uprisings. The deportation of the Armenians was one of these preventive measures. I confess that the deportation was not lawfully carried out everywhere. Unlawful acts have been committed in some places. The pre-existing hatred between Armenians and Mohammedans, intensified by the barbaric activities of the former, had produced many tragic consequences. Some officials abused their authority, and in several places people took preventive measures into their own hands, thereby mistreating innocent people. I confess I also confess that it was the government's duty to prevent this mistreatment and acts of violence or at least to kill the perpetrators and punish them severely. "

In the years 1915 to 1918, Talât temporarily took on other departments within the Ottoman government in addition to the office of interior minister, including the ministries of finance and post and telecommunications, and also acted as deputy to the absent War and Navy Ministers Enver Pascha and Cemal Pascha.

From February 1917 to October 1918, Talât, who therefore received the title of “Pasha”, served as Grand Vizier and thus head of government of the Ottoman Empire. When the war defeat of the main ally Germany already became apparent, he had to resign on October 8, 1918, but remained in office until the formation of the new government under the former Minister of War Ahmed İzzet Pascha on October 14, 1918.

Talât Pascha lived from November 10, 1918 until his violent death under the name Ali Sai in Berlin. A German submarine brought Talât, Enver, Cemal Pascha, Doktor Nazim , Bahaettin Şakir and Cemal Azmi to Odessa on the night of November 2nd to 3rd, 1918 .

Talât Pascha initially rejected the escape plans of his party friends and wanted to answer. He was soon convinced, however, to postpone the account "as soon as the country was free of foreign control and influence" (quotation from his letter of November 2, 1918 to his successor Ahmed Izzet Pasha).

Talât initially lived for a few days in a hotel on Alexanderplatz , then in a sanatorium in Neubabelsberg . After a while, friends had found him a three-room apartment on Hardenbergstrasse in Charlottenburg . He lived here with his wife, Hayriye Hanım. Doctor Nazim later moved in.

While he was convicted under a new, liberal and British pro-Government in Istanbul in 1919 in absentia to death, Talât worked from Berlin at a political comeback in Turkey, where he militias in the Turkish War of Liberation ( Kuva-yi Milliye ) Kemal Atatürk supported at the head of which he hoped to place himself in the future.

On March 15, 1921, Soghomon Tehlirian shot Talât Pascha on his back in Hardenbergstrasse near his apartment. Tehlirian was a member of the secret Armenian command Operation Nemesis , which pursued and killed the perpetrators of the genocide of the Armenians. He was acquitted of homicide charges in the subsequent murder trial. He justified the assassination attempt with the following words: "I judged the murderer of my wife and grandparents." German officers who belonged to the German military mission in the then Ottoman Empire were interrogated and accused the military leadership of the Ottoman Empire, which the public prosecutor dismissed To review Talât's responsibility for the massacre. The court only checked whether Tehlirian was convinced of Talat's guilt. According to the prosecutor, that was enough to clarify Tehlirian's motive.

Talât's remains were transferred from Berlin to Istanbul on February 25, 1943 by the Hitler regime with military honors and buried there at Abide-i Hürriyet , the monument to the Young Turkish Revolution of 1908.

Grand Vizier of the Ottomans since 1876