Karl Theodor Helfferich (born July 22, 1872 in Neustadt an der Haardt ; † April 23, 1924 in Bellinzona , Switzerland ) was a German economist , banker and politician , after 1918 a leading representative of the anti-Semitic German right in the German National People's Party .

Karl Helfferich was the oldest of seven children (including the businessman Emil Helfferich ) of the textile manufacturer Friedrich Helfferich . He studied law and political science at the University of Strasbourg . After his habilitation in economics in Berlin (1899), he worked as a private lecturer . From 1901 he worked as an expert with the title of professor for currency issues and in the economic department of the colonial department of the Foreign Office . In 1904 he switched entirely to the colonial department of the Foreign Office and was employed as director of the Baghdad Railway in Constantinople from 1906 . After working as a private lecturer and economist, Helfferich was appointed to the board of directors of Deutsche Bank in 1908 .

In February 1915 he became State Secretary in the Reich Treasury , and other political functions followed.

He was responsible for the German Reich's war financing in the First World War through bonds that the state heavily indebted and was therefore fully tailored to refinancing by the losers of the war. This led to inflationary consequences that were perceived as catastrophic (see also German inflation 1914 to 1923 ). Many Germans lost their fortunes as a result of the defeat. 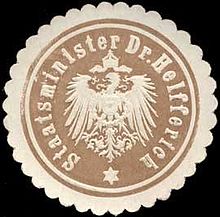 From May 22, 1916 to October 23, 1917, Helfferich was State Secretary of the Reich Office of the Interior and Vice Chancellor (until November 9, 1917). After Helfferich initially postponed taxation of the war profits, he finally arranged it so that it was not seriously charged. At first, like Chancellor Theobald von Bethmann Hollweg , he was a committed opponent of unrestricted submarine warfare , but since the turn of the year 1916/17 - in contrast to his intimate enemy Walther Rathenau  - he was one of its most active supporters.

At the meeting of the Prussian Council of Ministers on October 24, 1916, Helfferich stated that the planned Poland manifesto of the Central Powers only offered the prospect of the formation of an "autonomous" Poland based on the Central Powers . Germany had to create a “frame without a picture” in Congress Poland , but some took offense at the “frame”.

In the initial phase of the war, Helfferich also supported the SPD's demands for a reform of the Prussian three-class suffrage . He later moved to the right-wing camp and therefore had to resign from his offices at the end of 1917 under pressure from the left-wing majority in the Reichstag . Under the third Supreme Army Command (OHL) he was instrumental in drafting the auxiliary service law and promoting the Hindenburg program from 1916, as well as in drafting the peace treaties of Brest-Litovsk and Bucharest (1918). The conditions in the east after the treaty were for him only an "unfinished transitional state". After the assassination of the German ambassador to Soviet Russia, Wilhelm von Mirbach-Harff († July 6, 1918 in Moscow), Helfferich was dispatched to Moscow as his successor, but broke off his activities there after ten days.

Helfferich was also an early sponsor of the " national socialist " Eduard Stadtler and helped to fund his Anti-Bolshevik League on December 1, 1918 by making a cash donation of 5,000 marks from Paul , since he himself did not want to appear in public Mankiewitz , the director of Deutsche Bank. This was the nucleus of the 500 million mark anti-Bolshevik fund , which was founded by the German economy on January 10, 1919 in Berlin. From this fund money flowed into propagandistic anti-Bolshevik, later National Socialist projects, but also to violent groups such as free corps , active troops, etc., with which the socialist movement after the November Revolution was to be put down. Eduard Stadtler, the founder and head of the Anti-Bolshevik League, said he had for example murdered Rosa Luxemburg and Karl Liebknecht on January 12, 1919 and, days before, broke "Noske's hesitation" to deploy the military in Berlin.

During the Weimar Republic , Helfferich was a leading politician in the right-wing German National People's Party (DNVP) . He was one of the most prominent representatives of the extreme right through radical anti-republican propaganda and calls for murder against so-called “ fulfillment politicians ” or “ November criminals ” . Helfferich was a "seam" between economy and state and after the end of the war one of the intellectual fathers of the stab in the back legend . His polemics against Walther Rathenau , Matthias Erzberger and Joseph Wirth contributed to a climate that ultimately led to the political murders in the early Weimar Republic . In June 1919 Helfferich published a series of articles in the conservative Kreuzzeitung in which he summarized political and moral attacks against Reich Finance Minister Erzberger, for example he had committed perjury , let himself be guided in his political decisions by private financial interests and evaded taxes . Erzberger responded with a libel suit . In the following Erzberger-Helfferich trial from January 19 to March 12, 1920, which brought him a fine , Erzberger was discredited so severely that Erzberger resigned.

In 1920 Helfferich married Annette von Müffling, the daughter of Deutsche Bank founder Georg von Siemens . Elected to the Reichstag in June 1920 and moved to the top of the right-wing opposition as spokesman, he defended his war policy in the parliamentary committee of inquiry in 1920/21. A scandal broke out when he refused to answer questions from the USPD MP Oskar Cohn and justified this with his Judaism . Through his tirades against the conclusion of the Treaty of Rapallo , especially through his diatribe against Walther Rathenau on June 23, 1922, he can be described as indirectly responsible for his murder the next day. In the Reichstag, the news of Rathenau's murder resulted in tumultuous scenes: Social Democratic Reichstag members beat German nationalists out of the hall, Helfferich was insulted as a murderer. Chancellor Wirth pointed to Helfferich when he shouted his much-quoted "The enemy is on the right!"

During the hyperinflation of 1923, Helfferich drafted a rye currency plan, which was rejected. Essential features were adopted in the plan for the introduction of the Rentenmark . At the end of 1923 he applied for the post of Reichsbank President and was defeated by Hjalmar Schacht . In 1924 Helfferich died in the serious railway accident in Bellinzona . He is buried in the main cemetery in Neustadt an der Weinstrasse .

State Secretaries of the Reich Treasury of the German Empire