The Reichsbank was the central bank of the German Reich from 1876 to 1945 with its seat in Berlin .

Reichsbank building from 1869–76 on Jägerstrasse in Berlin

Ticket hall in the extension, 1903

Reichsbank extension on Werderschen Markt as the seat of the Central Committee of the SED, 1967

In the German Reich until 1918

When the German Empire was founded in 1871, it was responsible for the legislation on notes and coins. With the law of December 4, 1871, the mark was defined as the gold currency of the new state. In addition, on January 1, 1876, in accordance with the Banking Act of March 14, 1875, the Reichsbank was founded by taking over the Prussian Bank as the central bank based in Berlin. At the beginning it was directly subordinate to the Chancellor and had a board of directors whose president was appointed by the Kaiser on the proposal of the Federal Council. The Reichsbank's capital stock was 120 million marks and was owned by private shareholders. In 1884 6140 Germans and 1462 foreigners owned shares in the bank.

The job of the Reichsbank was to determine the price and quantity of money. For the time being, the right to issue banknotes remained divided between the Reichsbank (250 million marks) and 32 private central banks (135 million marks). By 1889, 19 of them had waived their banknote issuance privilege . In 1906 only the four large central banks ( Badische Bank , Bayerische Zentralbank , Sächsische Bank zu Dresden and Württembergische Staatsbank ) had the banknote privilege; it ended in 1935. According to the Coin Act of July 9, 1873, issued notes over 100 marks had to be covered by the Reichsbank . Uncovered notes under 100 marks were issued in accordance with the law of April 30, 1874 regarding the issuance of Reich cash receipts in the form of state paper money as Reich cash notes in denominations of 5, 20 and 50 marks. The Palmer rule , initiated by Finance Minister Otto Camphausen and anchored in Section 9 of the Banking Act of March 14, 1875, provided for banknote issues exceeding the quota to be taxed at five percent.

According to the Autonomy Act of May 26, 1922, which came into being under pressure from the Allies , the top bank management was no longer held by the Reich Chancellor, but solely in charge of the Reichsbank management. The Reich only retained supervisory powers. On August 30, 1924, according to the Dawes Plan, the Reichsbank became an institution independent of the Reich government. The President of the Reichsbank was elected by the General Council, consisting of 14 members, seven of whom are foreign from Great Britain , France , Italy , the USA , Belgium , the Netherlands and Switzerland . The foreign members were not allowed to be members of the government or state officials, but were recognized financial experts. The commissioner for banknote issuance to monitor the cover regulations for banknotes in circulation was elected from among them. The Reich President only had confirmation rights with the Reichsbank President . In 1924 the Reichsmark was introduced as a new means of payment. In 1929 there were 10,016 Germans, of whom 1,003,340 shares, and 1,288 foreigners, who owned 223,148 shares in the Reichsbank.

After the seizure of power by the Nazi regime in January 1933, the General Council was abolished, the President alone appointed and dismissed the President and the members of the Board. From February 10, 1937, with the law to reorganize the relations of the Reichsbank and the Deutsche Reichsbahn , the Reichsbank was again subject to the Reich government. In his Reichstag speech on January 30, 1939, Hitler announced his decision to “complete the path of restructuring the German Reichsbank from an internationally influenced banking company to the central bank of the German Reich, which had already been taken on January 30, 1937.” After the dismissal of Reichsbank President Hjalmar Schacht followed in January 1939 - through the Reichsbank Act of June 15, 1939 - the reorganization and renaming to Deutsche Reichsbank , which was now directly subordinate to the " Führer and Reich Chancellor " Adolf Hitler , who was thus able to grant the loans to the Reich himself. From then on, the Deutsche Reichsbank was “just one cog in the gears of the German war economy”. On May 1, 1942, the Reichsbank, headed by Minister of Economics Walther Funk since 1939, was named " National Socialist Model Company ".

Funk hardly got involved in day-to-day business; the central bank was practically led by his deputy Emil Puhl , who cultivated close relations with the National Socialist elite and had been the "executive vice president" of the Deutsche Reichsbank since 1939. At the beginning of 1945 gold and foreign exchange were mainly outsourced to Merkers . From there, but also from hiding places in southern Germany and Austria and from various Reichsbank branches, the values ​​were transported to the Federal Exchange Depository in Frankfurt am Main and returned from 1946 to 1996 by the Tripartite Gold Commission as looted gold to the countries of origin and to refugee organizations.

After the Second World War , the Deutsche Reichsbank officially ceased to exist. Nevertheless, there were numerous continuities, both in the period from 1948 to 1957 ( Bank deutscher Länder ) (BdL) and after 1957 ( Bundesbank ). For example, numerous employees of the Reichsbank later held comparable positions at the BdL and the Bundesbank. The banking business was often carried out in buildings and with the equipment of the former Reichsbank branches. In addition, the Bundesbank (e.g. pursuant to Section 40 (5 ) of the Bundesbank Act ) partially assumed the Reichsbank's liabilities. The approximately 20,000 shareholders of the Reichsbank were compensated in 1961. For this purpose, the Bundestag passed the law on the liquidation of the Deutsche Reichsbank and Deutsche Golddiskontobank on August 2, 1961, and a liquidator was used as in the liquidation of an ordinary stock corporation.

In downtown Essen there is still the street An der Reichsbank , where the Reichsbank branch in Essen was located until 1945 . 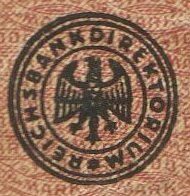 Official seal of the Reichsbank (on a 1000 RM banknote)

From 1876 the headquarters of the Reichsbank was housed in the Jägerstrasse 34-36 building, which was built from 1869 to 1876 by Friedrich Hitzig . Between 1892 and 1894, an extension was built at Hausvogteiplatz 14 according to plans by Julius Emmerich under the construction management of Max Hasak .

The house on Werderschen Markt was built as an extension between 1934 and 1940. After the end of the Second World War, the building was used by the Berlin City Office from July 1945 and the Ministry of Finance of the GDR from 1949, despite the destroyed upper floors .

In the period after he moved out of the House of Unity , it was the center of power of the GDR from 1959 to 1990 . Walter Ulbricht and his successor Erich Honecker officiated in the building as chairmen of the SED Politburo . It was the seat of the Central Committee of the SED , the Central Party Control Commission, the Central Revision Commission of the SED and the Berlin District Management of the SED.

From June 1 to October 2, 1990, the building was called "House of Parliamentarians" and was used by the People's Chamber of the GDR. Then the building went into federal property. In the years from 1997 to 1999 renovations and extensions followed, so that on January 20, 2000 the Foreign Office was largely able to take over the building.

Part of the building was used as a branch by the Bundesbank until 2007. The building is a listed building .

Due to the increased risk of bombing by the Allied forces, the Reich government decided in the early 1940s to have the securities stored at the commercial banks in the bomb-proof deep vault of the Deutsche Reichsbank in Berlin. Therefore, all of the nearly 30 million securities remained intact. That bundle embodied the almost complete fixed assets of the German people and their economic development in Germany within 150 years - as a unique document of German economic history of the 19th and 20th centuries.

Since the Reichsbank was located in the Soviet occupation zone of Berlin, the entire portfolio of securities was under their control from 1945. All larger companies were nationalized there, and no property claims could be made with the papers in the western part of Germany. Thus the documents were worthless (technical term: "powerless").

The owners in the western part of Germany had the receipts of the storage in the Reichsbank or sometimes the original shares, if they were not deposited in Berlin. In exchange for the new DM titles, the old Reichsmark papers were confiscated and destroyed. It was different with the papers in the Reichsbank vault: They no longer documented material claims, but became nostalgic, decorative documents of the time for collectors, economic and financial historians and archivists.

After the reunification in 1990, this bundle of securities was sorted and registered for more than ten years and was finally recognized as a national cultural asset . It was decided to make these contemporary documents of the great German economic and financial history accessible in the original to the interested public and to auction them off. Between 2003 and 2009, around 20 million German securities from the fund were auctioned off in five auctions. The proceeds from the historical documents from the period from 1871 to 1945 amounted to around 8.8 million euros - they went to compensation funds for victims of the Nazi regime and the GDR regime. Another auction of German government bonds took place in 2015.

Wikisource: Money topic page with many legal texts on the Reichsbank  - sources and full texts