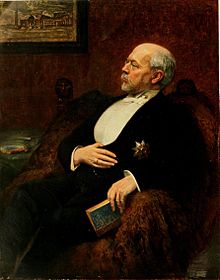 During the First World War , Hertling was Chancellor of the German Empire from November 1, 1917 to September 30, 1918 . Although he himself was against the parliamentarization of the Reich, his cabinet came into being in coordination with the majority parties from the Intergroup Committee .

Georg Friedrich Karl Freiherr von Hertling came from a Catholic, Rheinhessen Electoral Mainz family of officials who was also based in the Vorderpfalz. He was the son of the Hessian court judge Jakob Freiherr von Hertling and his wife Antonie (née von Guaita ) and was born in Darmstadt. His great-grandfather Johann Friedrich von Hertling had been the secret council chancellor in the Electorate of Palatinate-Bavaria from 1790. His maternal grandmother was Magdalena Maria Caroline Francisca Brentano , called Meline (1788–1861), who was married to Georg Friedrich von Guaita (1772–1851), the multiple mayor of the Free City of Frankfurt .

His mother's religious upbringing made him consider becoming a priest. Hertling attended the Ludwig-Georgs-Gymnasium there he was a student under director Dr. Christian Boßler , who preserved the institute in its humanistic character against the emerging natural sciences . He then studied philosophy in Munich , Münster and Berlin , where he received his doctorate in 1864 .

After his habilitation in 1867 in Bonn , an avowed Catholic, was because of the Kulturkampf appointed as an associate professor there until 1880, an experience that helped Hertling that leads to the establishment of the Gorres Society for the Care of science in Catholic Germany participated whose He remained president until his death in 1919. In 1882 Hertling was offered a full professorship at the University of Munich.

Hertling was one of the masterminds behind the movement for Catholic fraternities . He joined the KDSt.V. in 1862 . Aenania , later the K.St.V. Arminia at. His speech at the Katholikentag in Frankfurt in 1863 , at which he introduced the terms religion , science and friendship as the guiding principles of a Catholic fraternity student, is considered to be the trigger for the establishment of the Würzburg Federation , from which the Cartel Association and the Cartel Association later emerged.

From its founding in 1893 to 1911, Hertling was President of the German Society for Christian Art .

Georg von Hertling was the great-nephew of Bettina von Arnim and Clemens Brentano . The actress Gila von Weitershausen is his great-granddaughter. Georg von Hertling's cousin Ignatia von Hertling (1838–1909) worked as superior of the Capuchin Poor Clares and founded the Bethlehem Adoration Monastery in Koblenz-Pfaffendorf . One of his grandfather's cousins ​​was the Bavarian War Minister Franz Xaver von Hertling (1780–1844).

Georg von Hertling as a member of the Reichstag, 1911

In addition to academic work, Hertling also had political activities; he was a member of the Reichstag from 1875 to 1890 and from 1896 to 1912 as a representative of the center . There he devoted himself first to socio-political and later mainly to foreign and financial issues. From 1909 to 1912 he was the chairman of the central parliamentary group, who campaigned for the reconciliation of German Catholicism with the Prussian-Protestant nation - state . As Reichsrat for life, Hertling was also a member of the Chamber of Reichsräte , the first chamber of the Bavarian state parliament, from 1891 to 1918 .

On February 9, 1912, the Prince Regent appointed Luitpold Hertling Chairman of the Bavarian State Ministry and Foreign Minister , i.e. Prime Minister . The appointment of a representative of the majority parliamentary group in the state parliament to the office of head of government indicated that Bavaria was beginning to become parliamentarians . He formed the Hertling cabinet .

Hertling belonged to the right wing of the center faction, which, in contrast to the left, decidedly rejected parliamentarization. He also saw in her the danger that she would undermine federalism and strengthen the social democrats. His chancellorship meant that the direction in the center and left-liberal Progressive People's Party prevailed that wanted to take into account the special rights of the German federal states. Nevertheless, the Hertling government (since November 1, 1917) represented an important step towards the parliamentarization of the Reich, as the new Chancellor had to coordinate his government program with the majority parties in the Reichstag in advance. The center was given time to get used to a “proto-parliamentary regiment” and to work with the SPD and left-wing liberals.

With the left-liberal Friedrich von Payer as Vice Chancellor and the national liberal Robert Friedberg as Deputy Prime Minister of Prussia, two veteran parliamentarians were accepted into the cabinets as liaison men to the parties. The Social Democrats stayed outside the government so as not to complicate the formation of a government. Friedrich von Payer was also responsible for connecting the SPD and the government.

During Hertling's tenure there were some important steps towards parliamentarisation and democratization, for example a planned electoral reform with elements of proportional representation . Overall, however, the SPD was dissatisfied with him because the influence of the Supreme Army Command (OHL) (the military top) was still great and the reforms were only progressing slowly. At the end of September 1918, Hertling had finally lost confidence in the SPD; she just wanted to join the government with a change of policy. The governments of Bavaria and Baden also believed that Hertling was not the right man for a consistent peace policy. The Progressive People's Party thought no differently, but did not want to endanger the coalition. 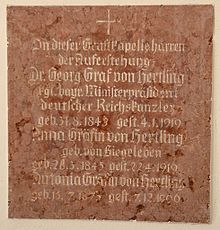 Grave plaque for Hertling in Ruhpolding

In view of the worsening military situation, the parties of the Intergroup Committee , including Hertling's own Center Party, demanded negotiations on a separate peace with the Allies that should not include annexations, as well as parliamentarization of the Reich: through a constitutional amendment, the government should depend on the confidence of the Reichstag be made. Hertling was determined to resist these demands. On September 26, 1918, however, department heads in the General Staff informed the State Secretary in the Foreign Ministry, Paul von Hintze , about the hopeless military situation - past OHL Quartermaster General Erich Ludendorff , but also without involving Chancellor Hertling. Hintze developed a concept for the revolution from above . When the OHL also demanded a broader base for the government on September 28, probably to make the democratic parties responsible for the defeat, Hertling was caught between all stools. The end of his chancellorship was sealed on September 29th in Spa at the headquarters . On the 30th, the emperor issued a decree on parliamentarization. Hertling's successor on October 3 was Prince Max von Baden , the preferred candidate of his Vice Chancellor Payer.

Georg von Hertling died just three months later and was buried in the crypt chapel of the Bergfriedhof in Ruhpolding .

National flag of the German Empire

Chairwoman of the Council of Ministers of the Kingdom of Bavaria