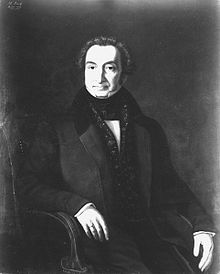 Ancillon, great-grandson of the Huguenot Charles Ancillon and son of the theologian and philosopher Louis Frédéric Ancillon , studied Protestant theology in Geneva and in 1790 became a preacher at the Friedrichswerder Church in Berlin. In 1792 he received a professorship for history at the Prussian Académie militaire . In 1803 Ancillon was appointed royal court historiographer and also a member of the Academy of Sciences in Berlin . He was appointed State Councilor in the Department of Culture in 1809. On June 23, 1810, Ancillon took up his post as tutor to the Crown Prince as the successor of Friedrich Delbrück - probably mainly at the instigation of the Queen - and gave up the office of preacher and professorship.

As the tutor of the Crown Prince, Ancillon had a strong influence on his intellectual development. This influence of Ancillon on Friedrich Wilhelm IV. Manifested itself not least in his sharply negative attitude towards the revolution of 1848 .

After the Prince reached the age of majority in 1814, Ancillon entered the Ministry of Foreign Affairs as Real Privy Councilor. In 1817 he was appointed a member of the State Council and the Committee for the Processing and Introduction of the Provincial Constitution and the Upper Censorship Board. From then on, Ancillon, as a member of the court party and opponent of Hardenberg, played an important role in the dispute about the introduction of a constitution in Prussia.

In May 1831 Ancillon was appointed Real Privy Councilor and Head of the Department for the Principality of Neuchâtel and on July 25, 1831, State Secretary for Foreign Affairs. In 1832 Ancillon was appointed minister of state to the head of the Prussian Foreign Ministry and designed a. a. 1834 with Metternich the Vienna final protocol. Ancillon’s foreign policy was fully at the service of Metternich’s restoration policy .

Ancillon died in Berlin on April 19, 1837. He is buried in the French cemetery in Berlin-Mitte.

The state philosophy of Ancillon moves in the field of tension between the Enlightenment , Romanticism and Christianity . Ancillon, who uses an eclectic method, orients himself primarily to Edmund Burke and Charles de Montesquieu . Ancillon's political and philosophical development was significantly shaped by the experience of the French Revolution as an eyewitness. Ancillon's aim is always domestic and foreign policy harmony, the avoidance of conflicts and the organic development of state and society.

Without developing a complete and systematic philosophy of the state, Ancillon starts from basic enlightenment assumptions such as the perfectibility of man and the extensive influence of understanding and reason on human activity. At the same time, however, only that society is worth striving for, which is not only constructed according to rational principles, but has grown organically in the course of history and the succession of generations. Ancillon therefore rejects both the radical Enlightenment, which he holds responsible for the French Revolution , and mere romanticism, which he denies the power of a practicable state structure that opens up opportunities for human development. The aim of Ancillon's philosophy of the state is thus the synthesis of Enlightenment and Romanticism under conservative auspices, namely in a corporate state that satisfies rational claims .

The historical judgment on Ancillon is ambivalent. In his article on Friedrich Wilhelm IV. In the Allgemeine Deutsche Biographie, Leopold von Ranke looks with benevolence at his tutor Ancillon: In Ancillon, the meaning and style of the French colony in Berlin was once again represented; In the formation of an ever present customer of the events of history and the history of dogmas of philosophy he was looking for his equal. However, in the same work, namely in the article dealing with Ancillon, there are also these words of an anonymous author: It seems incomprehensible today how the writings of Ancillon could attract attention, in which a sweet optimism with unctuous phrase and church pulpit logic mix to a pulp, the at most sufficient for the need of the soft souls of the court ladies.

Even Heinrich von Treitschke expressed similar: Ancillon was the fear of revolution in all limbs and was known as the revolutionary Empire finally fell, verily without Ancillons intervention since the Tentative turned the views of Metternich and followed docile any hint of the Imperial Palace .

Even in the 20th century, historians like Reinhart Koselleck or Hans-Joachim Schoeps Ancillon criticized his conservative, restorative foreign policy and his efforts to prevent the introduction of a constitution in Prussia.