Historically, left liberalism, also known as bourgeois democracy or radicalism , progress or freedom , is not identical with social liberalism. Rather, the focus of left-wing liberal movements in the 19th century was the consistent enforcement of individual freedoms against the claims of reaction and the church . Left-liberal party leaders like Eugen Richter , however, rejected the establishment of a welfare state . It was not until the 20th century that leading left-wing liberals such as Theodor Barth and Friedrich Naumann also increasingly represented socio-political positions. Left-wing liberals sometimes refer to themselves as radical democratic , which expresses the fact that citizens should gain significantly more influence on state action, for example by expanding plebiscitary instruments .

Looking at the political history of Germany in the 20th century, the following characteristics of left liberalism or social liberalism emerge :

The "sociopolitical left-wing liberalism", which has been gaining in importance since the 1980s, aims at the "expansion of the subjective rights of the individual" as well as a "cultural diversity" of society.

A trend that can be described as “social liberalism” can be observed in Germany since the middle of the 19th century. Efforts to find a liberal answer to the social question led to the establishment of the Verein für Socialpolitik in 1873 . The Hirsch-Duncker trade unions formed in 1868 are also part of the social-liberal spectrum.

Election results of liberal parties in the German Empire 1871–1912

In the German Empire (1871-1918) there was a great fragmentation of the liberal spectrum of parties with numerous splits and new foundations. During this period, groups that organized themselves - often under the label liberal or progressive - “in conscious distancing” from the National Liberal Party , which supported Bismarck and were considered to be conservative , are generally referred to as left-liberal . Well-known left-liberal politicians of this era were Eugen Richter , Theodor Barth , Max Hirsch , Franz August Schenk von Stauffenberg and Friedrich Naumann . The National Social Association founded by Naumann in 1896 was the first bourgeois party to have a social-liberal orientation and, by joining the Liberal Association in 1903, brought this tendency to the fore in the left-liberal party spectrum, while up until then the "struggle for political freedoms" had clear priority over the Possessed social question. In 1910 the various left-wing liberal parties, with the exception of the small Democratic Association, merged to form the Progressive People's Party . Since then, the term “left-wing liberalism” has predominantly been used in German-language journalism and specialist literature to denote this trend. 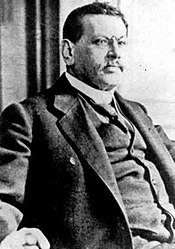 For the period of the Weimar Republic (1919–1933), the German Democratic Party (DDP; since 1930: German State Party) is viewed as left-liberal, in contrast to the right-wing liberal German People's Party (DVP). In addition to Theodor Wolff , Otto Fischbeck and Alfred Weber , the founders of the DDP also included his brother, the sociologist Max Weber , and the former National Socialist Friedrich Naumann. Another co-founder, the lawyer Hugo Preuss , became the “father” of the Weimar constitution .

Anton Erkelenz was also significant for the development of Weimar left-wing liberalism , from 1923 to 1929 chairman of the DDP party executive and until it was banned in 1933, chairman of the liberal Hirsch-Duncker trade unions .

Another important left-liberal figure in this period is Ludwig Quidde , the Nobel Peace Prize laureate in 1927. He was also involved in 1930 when the left wing of the DDP split off in the course of its transformation into the state party and founded the pacifist radical democratic party , the in the final phase of the republic, however, remained meaningless.

Organized left-wing liberalism left almost no trace in the struggle against National Socialist rule. Only individual personalities and their commitment are to be mentioned, including the work of Hellmut von Gerlach in exile in Paris, who was involved in the league for human rights there and took part in the Nobel Prize campaign for Carl von Ossietzky , or Robinsohn , who mainly operates in northern Germany -Strassmann group , which mainly consisted of former members of the DDP and their youth organization.

Development in the Bonn Republic 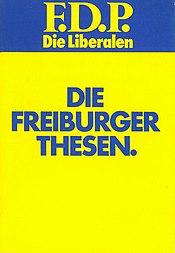 Printing of the Freiburg theses

With the FDP , founded in 1948, a party was created for the first time that encompassed the entire liberal spectrum. In the initial phase, the political orientation of the state associations differed considerably, with left-wing liberal traditions predominating in Baden-Württemberg and the city states of Hamburg and Bremen, while strong national liberal tendencies were particularly evident in North Rhine-Westphalia and Hesse .

The left wing of the FDP has grown stronger since the mid-1960s in the period of the emergency laws , grand coalition and extra-parliamentary opposition , when part of the student movement that pursued less revolutionary than reform-oriented strategies joined the FDP or the young democrats .

Left-wing liberalism was politically most influential in the Federal Republic of Germany between 1969 and 1982, when the FDP formed the Social Liberal Coalition with the SPD and joined forces with the Freiburg theses adopted in 1971 - flanked by the “polemic”. Another chance for the liberals of their then General Secretary Karl -Hermann Flach - confessed to a "democratic and social liberalism".

The change of course in 1982, known as the " turning point ", which led to the end of the social-liberal coalition at federal level and an alliance between the liberals and the CDU / CSU, was in part not supported by the left wing of the FDP. As a result, numerous left-wing liberals left the party and contributed to the largest decline in membership in the history of the FDP.

Many of the left-wing free democrats joined the SPD , including Günter Verheugen , Ingrid Matthäus-Maier and Andreas von Schoeler . The newly founded Liberal Democrats , supported by the Young Democrats, under the leadership of Ulrich Krüger and Theo Schiller , remained politically insignificant; Some of its members later switched to the Greens , including Irmingard Schewe-Gerigk , who later became a member of the Bundestag . The attempt to continue to create a common platform for the left-wing liberals organized in various parties by means of "Liberal Associations", whose federal association was temporarily headed by Helga Schuchardt , who was not part of the FDP after leaving the FDP, failed .

Development in the Berlin Republic

Of the new political organizations that developed out of the opposition civil rights movements in the GDR in 1989/90 , Bündnis 90 can most likely be classified as “social” or “left-liberal”, which in 1992/93 merged with the Greens to form Bündnis 90 / Die Greens joined forces. This then succeeded in gaining a foothold in the left-wing liberal voter potential. Alliance 90 / The Greens as a whole is, however, a collection of different currents, including left-wing alternative and formerly communist ones.

At the beginning of 2018, the newly elected party leadership of Bündnis 90 / Die Grünen , Annalena Baerbock and Robert Habeck formulated the goal of wanting to position the Greens as a left-wing liberal party in the German party spectrum with a commitment to "integrative society".

The party-internal movement “ Emancipatory Left ” of the Left Party is sometimes referred to as left-liberal because of its socially liberal standpoints.

The Pirate Party , which became better known in the European elections in 2009 , could develop into a left-liberal rather than a libertarian group due to its base . Various representatives of the pirates themselves like to use the term for themselves. On April 5, 2014, the state party congress in North Rhine-Westphalia adopted a position paper according to which it regards "the Pirate Party Germany in its self-image [...] as a social liberal party".

At the end of August 2014, the former Hamburg FDP Senator Dieter Biallas and the former Vice-Party Leader of the Hamburg FDP, Najib Karim , announced the founding of a new left-liberal party. Karim had left the FDP the month before. The founding group went public under the name Neue Liberale . A first federal party conference on September 28, 2014 elected Karim and Sylvia Canel as chairmen with equal rights. The party ran for an election for the first time in Hamburg in 2015 .

On January 6, 2015, the Federal Chairman of the Liberal Democrats, Bernd Grothkopp, together with Najib Karim from the New Liberals and Alexander Drews, the Chairman of the Consumer Protection Party, announced the start of talks on cooperation between the three organizations and a possible merger. After these discussions had stalled in the meantime, they were resumed in an extended group at the end of 2016. At a press conference on March 21, 2017, a joint “Social Liberal Declaration” was published, in which, in addition to the Liberal Democrats and the New Liberals, the Pirate Party, the Transhuman Party , the Party of Humanists and the YourTurn working group of the Left Youth were involved. Other organizations should join in the future in order to enter into social liberal cooperation and establish a united social liberal force in Germany. However, this appeal had no organizational consequences; In the 2019 European elections , the New Liberals, the Humanist Party and the Pirate Party each ran with their own lists, with only the pirates winning a seat.

The Liberal Socialist Party was a left-wing liberal Swiss party , active from 1946 to 1990.

A social-liberal and later also ecologically oriented Swiss party was the Landesring der Independees , which existed from 1936 to 1999 and reached its peak around 1970.

Outside the German-speaking area

For a long time, left-wing liberalism in the form of radicalism was particularly deeply rooted in France. The most important historical proponent of radicalism was the Radical Party , which dominated French politics for many decades - until the middle of the 20th century. In contrast to socialist or communist currents, the Parti Radical was the representative of the “radical” bourgeoisie , which in France can look back on a long tradition.

In several European countries there are currently represented liberal parties in parliaments that position themselves to the left of the center and usually oppose a more right-wing liberal party. These are, for example, the small Parti Radical de Gauche in France, who sees itself as the ideological successor to the Parti Radical . In Poland, for example, these are the Demokraci , which emerged from the liberal Unia Wolności, which was responsible for government until the mid-1990s , and which are opposed to the Platforma Obywatelska by Donald Tusk , which is viewed as liberal-conservative , and the Twój Ruch party by Janusz Palikot , which is also regarded as progressive , furthermore the Liberal Democrats in Great Britain, the Democrats 66 in the Netherlands and Det Radikalische Venstre in Denmark, which can be classified as the leftmost of the liberal parties in Europe. To determine their political position, instead of the term left-wing liberalism commonly used in Germany, terms such as social, progressive, radical or new liberalism are used in these countries .