The Free People's Party (short name: FVP ) was a political party in the Federal Republic of Germany . At the beginning of 1956, 16 members of the FDP parliamentary group had left the parliamentary group, including the four FDP ministers Franz Blücher (economic cooperation), Fritz Neumayer (justice), Victor-Emanuel Preusker (housing) and Hermann Schäfer (special tasks). The so-called Euler Group, named after one of its leading members of parliament, founded the Free People's Party in April, but joined the German Party (DP) after about a year . 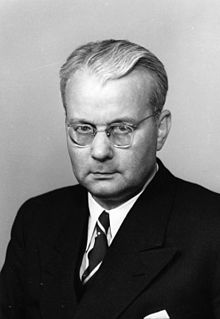 Franz Blücher , one of the four FDP ministers until 1956

After the Second World War , left and right liberals had reorganized themselves into a common party, the Free Democratic Party. The 1950s were, however, marked by conflicts between the two wings, for example at the party congress in 1952 when a national liberal German program was opposed to a “Liberal Manifesto”. However, there was no clarification of the programmatic contradictions.

In the federal election in 1953, the FDP lost a few percentage points, but continued the coalition under CDU Chancellor Adenauer and with other parties, so that Adenauer's bourgeois coalition had a two-thirds majority for constitutional changes. She could propose four ministers; Justice Minister Thomas Dehler, on the other hand, became parliamentary group leader and in 1954 also party chairman. Dehler tried to profile the party towards Adenauer and the CDU / CSU, especially in the field of foreign policy. However, Adenauer managed to play off the rivals within the FDP against each other, as was shown in the Saar Statute in 1955 . FDP MPs around Franz Blücher and August-Martin Euler supported Adenauer despite the faction's different resolutions.

The reason for a break within the FDP parliamentary group came in January 1956. The CDU / CSU introduced a bill on a trench election system to the Bundestag . Its introduction would have cost the FDP a large part of its parliamentary mandates. The FDP of North Rhine-Westphalia reacted to this : if it had previously ruled with the CDU in Düsseldorf, it switched to a coalition with the SPD in February. The result was that Adenauer no longer had a majority in the Federal Council. For a minority of free democrats such as Wolfgang Döring and Walter Scheel in North Rhine-Westphalia, this was the beginning of a more flexible coalition policy, but for most of them it was more of an act of self-defense against excessive behavior by the Union. They did not think of an SPD-FDP coalition at the federal level.

The change of coalition in Düsseldorf resulted in 16 FDP members of the Bundestag, including the four FDP ministers, leaving the FDP parliamentary group on February 22nd. It was not the left or right wing that separated from the FDP, but the center of the party (although Euler was definitely one of the National Liberals). The Union only wanted to continue the coalition with the resigned MPs, so the FDP had become an opposition party. The FDP party congress from April 20-22, 1956 excluded those who had left. In January 1957, the FDP stabilized again at its party congress; Dehler was replaced in the chairmanship by Reinhold Maier , and its Berlin program represented the FDP as the third force in the middle.

Foundation of the FVP

On April 23, 1956, the so-called Euler Group founded the FVP, after it had already organized itself on March 15 in the Bundestag as a “Democratic Working Group”. This means that the FVP, along with the DSU, is one of the two parties in the history of the Federal Republic of Germany that was a member of a government coalition and provided ministers without having received seats in the Bundestag in the previous Bundestag election. The founding party congress took place on June 23 and 24, 1956 in Bochum. Housing Minister Victor-Emanuel Preusker was elected as party chairman, the Federal Minister for Special Tasks Hermann Schäfer and the Bremen state politician Kurt Entholt as his deputies . On October 15, 1956, the FVP ministers submitted their resignation. Adenauer asked the ministers to remain in office until further notice. Blücher and Preusker remained in government until the end of the legislative period. Fritz Neumayer and Hermann Schäfer left the federal government on October 16, 1956. Neumayer was replaced by the DP MP Hans-Joachim von Merkatz . Schäfer was not replaced as Minister for Special Tasks and the cabinet was reduced by two ministers after Waldemar Kraft ( BHE ) left.

The only parliamentary group leader of the FVP in the German Bundestag was Ludwig Schneider (March 1, 1956 to March 14, 1957); the only party chairman was Victor-Emanuel Preusker. Federal managing director was Albert Derichsweiler . On January 20, 1957, the FVP merged with the conservative German Party (DP).

The Berlin State Association did not join the merger with the DP, remained with six members in the Berlin House of Representatives and moved into the Bundestag in 1957 under the name of the Free German People's Party (short name: FDV ) with Karl Huebner , who was elected by the House of Representatives as representative for Berlin . In the 1958 parliamentary elections , the FDV, under its chairman Carl-Hubert Schwennicke, missed re-entry into the state parliament with only 0.7%. Hübner joined the CDU in 1959. The FDV dissolved at the end of 1961.

Parliamentary groups in the German Bundestag