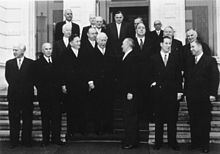 After force of the Protestant faith, was to Obersekunda the secondary school had visited in Poznan, he then completed an agricultural apprenticeship. From 1915 to 1920 he was a soldier and took part in the First World War, where he was seriously wounded. Most recently he was employed as a company commander. From 1921 to 1939 he was director of the “Main Association of German Farmers' Associations” in Poznan, and from 1925 he was also director of the “German Central Agricultural Association in Poland ”. From 1939 to 1940 he was President of the Poznan Chamber of Agriculture . From 1940 to 1945 he was the managing director of the "Reichsgesellschaft für Landbewirtschaftung in dereinegegelte Ostgebieten mbH" ("Reichsland") in Berlin , which was relocated to Ratzeburg shortly before the end of the war . From 1945 to 1947 he was interned in Schleswig-Holstein and lived as an unemployed person in Ratzeburg until 1950 .

From 1949 to 1951 he was spokesman for the Weichsel-Warthe country team and signed the charter of German expellees . He later became honorary chairman.

Kraft was a member of the NSDAP . On November 13, 1939, he was also appointed Honorary Hauptsturmführer of the general SS .

In 1950 he was one of the founders of the Federation of Expellees and Disenfranchised (BHE), of which he was state chairman in Schleswig-Holstein from 1950 to 1951. In 1951 he was elected federal chairman of the BHE, which from November 14, 1952 was called the All-German Block / BHE (GB / BHE). After the scandal at the federal party congress on September 8 and 9, 1954, about the failure to re-elect the press officer Eva Countess Finck von Finckenstein , Kraft did not accept his subsequent re-election as federal chairman (90 of 131 votes).

From 1950 to 1953 Kraft was a member of the state parliament of Schleswig-Holstein, where he represented the constituency of Lauenburg- West.

Waldemar Kraft was last drafted into the German Bundestag (3rd electoral term 1957) via the state list of North Rhine-Westphalia .

Deputy to the Prime Minister of Schleswig-Holstein

Finance Minister of the State of Schleswig-Holstein

Minister of Justice of Schleswig-Holstein