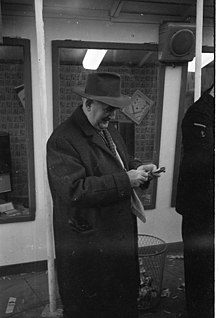 Wilhelm Käber at the Christmas Lottery on Berliner Platz (December 14, 1963)

Käber grew up in the province of Poznan . After graduating from high school, he came to Niederlausitz . He attended the teachers' college and was an elementary school teacher in the Waldenburger Land from 1921 to 1925. In 1925 he became a municipal civil servant, and in 1933 he was dismissed from the public service by the National Socialists . During the Second World War Käber was at the Lockstedter Lager Army ammunition facility with the rank of chief fireworker. After his release he stayed in the community as a merchant and founded a wagon construction company. Käber was married three times and had four children.

Käber became a member of the SPD after the First World War.

The Landtag elected Käber as a member of the third (July 1, 1959) and fourth (July 1, 1964) Federal Assembly , each of which elected Heinrich Lübke as Federal President .

From December 18, 1945 to September 25, 1946 Käber was honorary mayor of the municipality of Lockstedter Lager and from October 24, 1946 to November 29, 1947 also honorary district administrator in the Steinburg district .

From June 19 to November 6, 1946 Käber was initially the parliamentary representative of the state interior minister. Käber then served as State Minister of the Interior in Schleswig-Holstein until September 5, 1950 , and from August 29, 1949, he was also Deputy Prime Minister.

Käber was awarded the Great Cross of Merit with Star and Shoulder Ribbon of the Federal Cross of Merit on October 18, 1963 . In Hohenlockstedt , the former Lockstedt camp, a school was named after him.

Deputy to the Prime Minister of Schleswig-Holstein

Minister of the Interior of Schleswig-Holstein