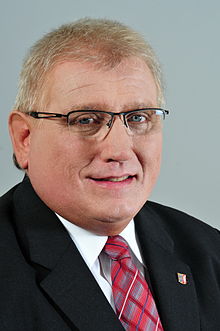 Klaus Schlie (born May 14, 1954 in Mölln ) is a German politician ( CDU ). From October 2009 to June 2012 he was Minister of the Interior of Schleswig-Holstein . He has been President of the Schleswig-Holstein State Parliament since June 5, 2012 .

After completing secondary school in 1970 at the Mölln Realschule, Schlie attended the Mölln Technical High School, where he passed the Abitur in 1973 . He then completed a teaching degree at the University of Education in Kiel , which he completed in 1981 with the second state examination for teaching at secondary schools . He then worked as a teacher until 1996 .

Schlie joined the Junge Union as a student in 1971 and the CDU in 1972. Since 1999 he has been chairman of the CDU district association Herzogtum Lauenburg .

Klaus Schlie is married and has three children.

Schlie was elected to the Schleswig-Holstein Landtag for the first time with a direct mandate in the Lauenburg-Mitte constituency in the 1996 state elections (14th electoral period) . There he was a member of the Home Affairs and Legal Committee, domestic and legal policy spokesman for the CDU parliamentary group and from 1997 to 2000 also deputy chairman of the special committee for constitutional reform .

In the state elections in 2000 he was narrowly defeated in the constituency by the SPD candidate Wolfgang Fuß , but moved back into the state parliament via the state list . In addition to his previous functions, he was a deputy member of the Environment and Agriculture Committee and also held the office of deputy chairman of the CDU parliamentary group.

The state elections in 2005 brought him the direct mandate again with 46.9% of the first votes in the constituency of Lauenburg-Mitte. However, when Peter Harry Carstensen took over government on April 27, 2005, Schlie was appointed State Secretary for Administrative Modernization and Debureaucratisation in the Ministry of Finance and had to resign from his Landtag mandate because State Secretaries are not allowed to be civil servants in the Landtag. After the collapse of the grand coalition, Prime Minister Carstensen dismissed all members of the SPD government on July 21, 2009, and Schlie also took over the post of State Secretary in the Ministry of the Interior until the new election in October 2009.

In the state elections in 2009 he was again able to prevail in the constituency with 40.3% of the first votes and was then appointed Minister of the Interior of Schleswig-Holstein on October 27, 2009.

After the state elections in 2012 , he entered the state parliament for the third time with 39.9% of the first votes - now for the newly designed constituency of Lauenburg Nord . On June 5, 2012, the newly constituted state parliament elected him President of the State Parliament.

In the 2017 state elections , Klaus Schlie again entered the state parliament for the 19th electoral term with 39.5 percent of the first votes as a directly elected member of the Lauenburg-Nord constituency . At the constituent meeting on June 6, 2017, he was re-elected President of the State Parliament.

In June 2011, Schlie was accused of questioning judicial independence as Minister of the Interior. In a letter to a judge at the Elmshorn district court , he criticized a judgment against a police officer before the official grounds for the verdict were given. Justice Minister Emil Schmalfuß described the letter from his cabinet colleague as "inappropriate" and its targeted publication in police circles as "simply unacceptable" and distributed his own letter in judicial circles. Three professional associations of lawyers in Schleswig-Holstein also rejected Schlie's approach. A press spokesman for the New Judges Association described it as unacceptable that "a minister publicly reprimands a judge by naming her name and offers her patronizing tutoring, apparently with the aim of getting" better "judgments in the future."

After the verdict was published, the lawyer and blogger Udo Vetter wrote that the minister had harmed the police officer. The judge’s judgment was meticulously worked out; this quality should “not fail to have a certain effect” in the appeal process that has now been initiated. In addition, the appellate judges might want to avoid the impression that they are considered rabbits' feet if they uphold the appeal.

President of the Landtag of Schleswig-Holstein

Minister of the Interior of Schleswig-Holstein