This article explains a citizens' movement in the GDR, the Austrian magazine NEWES FORVM is explained under FORVM .

The New Forum (abbreviation: NF, abbreviation: Forum) was one of the citizens' movements that emerged during the peaceful revolution in the GDR and played a key role in shaping the turning point. Part of the New Forum was later merged into Bündnis 90 and finally into the Bündnis 90 / Die Grünen party . Another part was retained as an independent organization that is active today as a small party in the area of ​​the former GDR .

On October 23, 1989, the New Forum in Schwerin called for a demonstration.

Former office of the New Forum in Brandenburg an der Havel 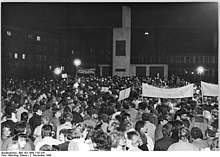 Approved demonstration at the New Forum in Guben , November 1989

The new forum was on 9./10. Founded September 1989 near Berlin in the Altbuchhorst district of Grünheid , in the house of Katja Havemann , Robert Havemann's widow . On September 10th, the group published the appeal “The time is ripe - departure 89”. It had been signed by 30 first signatories from all over the GDR, almost half from Berlin. Among them were the painter Bärbel Bohley , the physicist Martin Böttger , the doctor Erika Drees , the home educator Katja Havemann, the lawyer Rolf Henrich , the dentist Jutta Seidel , the physicist Reinhard Meinel , the physicist Sebastian Pflugbeil , the doctor and molecular biologist Jens Reich , the concrete skilled worker Reinhard Schult , the physicist Rudolf Tschäpe , the student Michael Arnold and the pastor and director of the Evangelical Academy Magdeburg Hans-Jochen Tschiche . The appeal began with the sentence "In our country the communication between state and society is obviously disturbed" and then described the situation in the GDR in a longer paragraph. In addition, various points of criticism were listed that were linked to wishes for social development, but without making concrete political demands. The main aim of the call was to call for a “democratic dialogue”. The important questions should be considered and discussed “in public, together and throughout the country”. The New Forum wanted to be a “political platform” for this dialogue, which was described as necessary, and called on all citizens of the GDR to work on the “transformation of our society” and to join the New Forum.

Activities up to the Volkskammer election on March 18, 1990 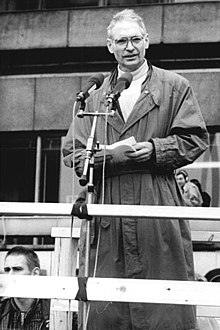 Jens Reich speaks at the large demonstration in Berlin on November 4, 1989

On September 19, 1989, the New Forum announced the establishment of the association, citing Article 29 of the GDR constitution in eleven of the 15 GDR districts . Two days later, the state news agency ADN described the New Forum as anti-constitutional and anti-subversive. At this point, 3,000 people had already signed the appeal. On September 25, the application for admission was officially rejected on the grounds that there was no social need for such an association. In government circles, the call for founding was interpreted as follows: It was a dangerous opposition paper because 70 percent of it named the problems of the population and only 30 percent was an attack on the GDR.

“In the 40th year of the republic, it seems that no one cares about threats and bans by the socialist authorities. 900 citizens signed up for a service in Schwerin in the membership list of the New Forum, although Interior Minister Friedrich Dickel had recently declared the association to be an anti-state organization. "

The appeal of the New Forum was copied and passed on. The appeal and signature lists were displayed at events - initially mainly in churches. The MfS observed these activities as "subversive". By the end of 1989, around 200,000 GDR citizens signed the appeal. At that time, the New Forum had around 10,000 permanent members.

The New Forum had a high degree of mobilization. The protest in the streets, the Monday demonstrations , but also several demonstrations almost every day throughout the GDR and many events were largely supported by the New Forum and its binding force. Structures also grew: contact addresses were distributed, regional and supra-regional working groups were formed on various topics, speakers were elected, and political demands were made. Most of the decisive actors in the New Forum saw the goal of their work in changes in the GDR. They did not strive for a capitalist social system and assumed that Germany was two states . A reunification of the two German states was not an issue for them. After the fall of the Berlin Wall on November 9, 1989 , the New Forum with these positions and the less concrete goals of the founding appeal (dialogue, justice, peace, democracy) increasingly lost its influence on the popular movement.

From December 1989 to March 1990, the New Forum worked with representatives at the central round table and (sometimes longer) at local round tables, which approached the existing GDR government and the corresponding local political decision-makers and the political development with a large number of demands significantly co-determined during this time. From February to March 1990, the New Forum appointed Sebastian Pflugbeil, a minister with no portfolio in the government under Hans Modrow .

The political orientation of the New Forum was initially relatively indeterminate; a wide range of members with different views were organized in it. The controversial question of whether to form a party or to remain a citizens' movement culminated in several calls for the establishment of a party from within the forum at the end of 1989. On January 27 and 28, 1990, after long debates, about a quarter of the supporters, mainly members from the southern districts of the GDR, split off from the New Forum as the German Forum Party (DFP), of which Jürgen Schmieder became chairman . With reunification, the DFP merged with the FDP .

At the official founding conference in January 1990, violent clashes broke out between the left and the moderate wing. As a result, the New Forum retained its basic democratic structures, but deleted its commitment to the GDR as an independent state from the program. On February 6th, the New Forum joined forces with the citizens' movements Democracy Now and Initiative Peace and Human Rights (IFM) to form the electoral alliance Bündnis 90 . In the People's Chamber election on March 18, Bündnis 90 received 2.9% of the votes and put 12 members in the People's Chamber . Together with the members of the Green Party in the GDR , they founded the Bündnis 90 / Greens parliamentary group. In it sat for the New Forum Joachim Gauck , Gotthilf Matzat , Hanns-Ulrich Meisel , Ilse Nierade-Koenig , Rainer Pietsch , Jens Reich, Werner Schulz and Hans-Jochen Tschiche . The parliamentary group spoke out vehemently against the currency reform and unification with the Federal Republic of Germany that were, in their opinion, too rapid .

For the first all-German federal election after reunification on December 2, the New Forum joined up with Democracy Now, IFM, the Independent Women's Association (UFV) and the Green Party in the list association Bündnis 90 / Greens - Citizens Movement (B90 / Gr). Werner Schulz and Ingrid Köppe were members of the eight-member Bundestag group, which only included MPs from the eastern federal states because the West Greens had failed the five percent hurdle .

The new forum after the fall of the Wall

Alliance 90, which up to this point only referred to various electoral alliances, was subsequently re-established as a party. In it Democracy Now, IFM and part of the New Forum came together before Bündnis 90 merged with the Greens in 1993 to form the new party Bündnis 90 / Die Grünen .

The New Forum defines itself as an “independent political association of citizens who want to enforce democracy in all areas of life.” It also emphasizes “relying on non-violence, reason and the power of arguments”. It criticizes all totalitarian structures and strictly rejects xenophobia, neo-fascism, Stalinism, the glorification of violence, militarism, anti-Semitism, racism and sexism. It also criticizes the social cuts of the established parties, which in its view hardly differ from one another. A network of various citizens 'initiatives and interest groups is necessary in order to create cross-party citizens' representation. Only externally does it meet the requirements of the party law in order to be able to participate in elections.

The New Forum is only active in the new federal states. It is divided into the federal association and the regional associations of Berlin , Brandenburg , Mecklenburg-Western Pomerania , Saxony and Saxony-Anhalt . The federal executive committee consists of three equal members.