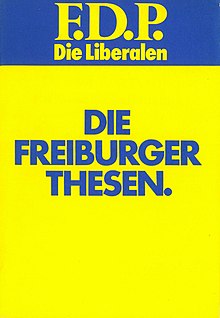 The Freiburg theses were the basic program of the FDP from 1971 to 1977. They were adopted on October 27, 1971 at the federal party conference of the FDP in Freiburg im Breisgau . It replaced the Berlin program of the Free Democratic Party from 1957.

The Freiburg theses oriented the FDP towards reform-ready “ social liberalism ” and contained a separate section on environmental protection . They programmatically implement the goals of the social-liberal coalition that has ruled since 1969 . On November 8, 1977, they were replaced by the more economically liberal Kiel theses .

Liberalism is the oldest of the modern political movements. It comes from the Enlightenment . The Free Democratic Party (FDP) stands in the tradition of classical liberalism , but it is a political re-establishment of the post-war period in the three western zones of occupation .

The Freiburg theses are in the context of the founding of the first social-liberal coalition at federal level in 1969 , under the decisive influence of FDP party chairman Walter Scheel , then Foreign Minister, and Willy Brandts . Walter Scheel worked together with member of the executive committee Werner Maihofer and the general secretary Karl-Hermann Flach in the program commission of the FDP in the conceptual design of the theses. The main author of the formulated theses was Werner Maihofer. The aim of the theses was also to emancipate the FDP from its role as a majority procurer in the three-party system of the then Federal Republic, in which, in the opinion of the program commission, a content-related program fell short of the image of a functional party.

The theses were prepared in several meetings of a program committee. a. met in the Theodor Heuss Academy of the Friedrich Naumann Foundation in Gummersbach .

The economic liberalism of the 1950s and 1960s was replaced by socio-political reform liberalism. Liberalism should no longer only be politically oriented, but also enable social engagement. The Freiburg party congress preferred Friedrich Naumann's concept of freedom , according to which people's abilities to make independent decisions do not contradict community, humanity and democratic participation, but are only just beginning to merge with them. The four central theses were:

By and large, the program emphasized the freedom of the individual, but at the same time took a stance on basic social problems. It was replaced by the Kiel theses in 1977 .

Principles of the Free Democratic Party