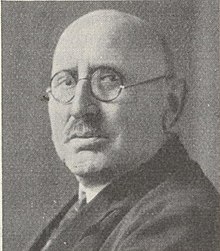 Adam Stegerwald (born December 14, 1874 in Greußenheim near Würzburg , † December 3, 1945 in Würzburg) was a German politician ( center , later CSU ). He was a co-founder of the Christian trade unions in Germany and the CSU in Bavaria .

The son of a small farmer attended elementary school in Greußenheim from 1881 to 1888 . He completed an apprenticeship as a carpenter in Würzburg . After his apprenticeship, he went on a wandering tour in southern Germany and Switzerland . In 1893 he joined the Catholic journeyman's association in Günzburg ( Swabia ). In Munich he worked in the center's labor electoral association from 1896 . Primarily he campaigned for the building of a Christian trade union movement. In 1899 he became the honorary first chairman of the Central Association of Christian Woodworkers, which he chaired until 1903.

From 1900 to 1902 he was a private listener with Lujo Brentano for two semesters for economics and special economics at the University of Munich . From 1903 to 1905 he attended lectures at the Cologne Commercial College . From 1903 to 1929 he worked as general secretary of the general association of Christian trade unions in Germany. At the same time he was the international secretary of the Christian Trade Union International from 1908 to 1914 , which, however, was not effective.

In the conception of the trade union policy, he steered an anti-socialist course loyal to the emperor and supporting German colonial policy and tried to reach a German workers ' congress by merging with other organizations ( German national trade unionists , Protestant and Catholic workers' associations ) in order to counterbalance the free trade unions create. He supported the government's war course and was a board member of the War Food Office from 1916 to 1919 . From 1917 to 1918 he belonged to the Prussian manor house . 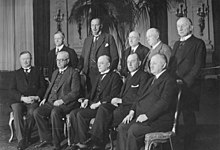 Photography of the Reich Cabinet Brüning I 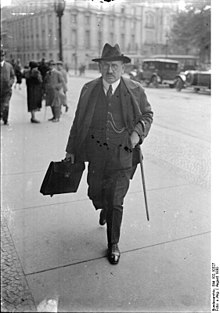 As Reich Labor Minister in the cabinet of his former personal advisor Heinrich Brüning , he tried to save at least the foundations of the Weimar welfare state under the extreme conditions of the global economic crisis , but failed because of resistance from heavy industry . Already at that time he warned that the social aggravation could only intensify the political radicalization from the right and from the left.

On February 21, 1933 he was assaulted by the National Socialists at an election rally in Krefeld . In March 1933, together with Ludwig Kaas and Albert Hackelsberger, he conducted negotiations with Adolf Hitler , as a result of which the Center Party approved the Enabling Act .

In July 1933, he and Heinrich Imbusch were expelled from the German Labor Front. From 1933 to 1934 he was indicted together with Wilhelm Marx and Heinrich Brauns in the trial against the Kölner Volksverein-Verlag in his capacity as board member of the Volksverein for Catholic Germany, but the trial was discontinued in 1934.

During the National Socialist rule , Stegerwald remained without political influence. On July 30, 1934, he went into hiding temporarily. From 1934 to 1935 he held the position of bailiff of two women's convents in and near Berlin. In 1935 he acquired a stake in a peat utilization company. In 1937 he bought a tenement house for old-age security from transitional payments he had made during his ministerial time. He dealt with National Socialism in letters with Eugen Bolz , Thomas Esser and Jean Albert Schwarz . He pleaded for the Catholic German bishops to move away from their strictly negative course towards the regime, since otherwise he expected a further radicalization of Nazi politics and the inevitable smashing of the churches.

Until the end of 1938 he received funds from the transfer of the transitional allowance from his ministerial work. In June 1939 he was listed in the SD overview recording leading men of the system time (denominational parties) . In March 1944 he moved to Greußenheim after the bombing. After the assassination attempt on July 20, 1944 , he was temporarily arrested as part of the Gewitter campaign . From August 24 to October 19, 1944, he was imprisoned by the Gestapo in the Würzburg prison.

As early as 1920, at the congress of the Christian trade unions in Essen, Stegerwald presented his ideas on the establishment of a cross-denominational, anti-socialist people's party that should appeal to the broadest possible section of the population. His approach of “building bridges between the working class and the agricultural population and between denominations” only met with greater resonance after the end of the Second World War .

On May 11, 1945, at the instigation of the American occupation forces, he was appointed president of the Lower Franconia district. Stegerwald became the leading head of the Würzburg group , which, alongside the Munich group around Josef Müller, played a key role in founding the Christian Social Union in the summer and autumn of 1945.

On August 14th, during a conversation in Munich City Hall about the establishment of a Bavarian party with a Christian-social stance, he represented his ideas of a "bridge party". On August 21, 1945, he gave a widely acclaimed speech in the Würzburg town hall on the question “Where are we?” He saw the main cause of the catastrophe of World War II in the protracted fragmentation of Germany, which became exaggerated after the late unification in the 19th century Power hunger. Related to this was the longing for a people's community, as the National Socialists finally promised. The spreading of the stab- in- the-back legend was also largely to blame , and in particular the eventual merger of President Hindenburg with Hitler. Stegerwald demanded an express commitment to democracy and the abandonment of the idea of ​​state omnipotence.

Tomb at the main cemetery in Würzburg

General commissioners of the Lower Main District (until 1837), District President of Lower Franconia