The Great Headquarters (GrHQu; official name: Great Headquarters of His Majesty the Emperor and King) was the mobile strategic command center of the German armed forces in the Franco-Prussian War of 1870/71 and in the First World War . It formed neither its own authority nor its own body, but was the meeting place for representatives of the highest military and political decision-making bodies of the North German Confederation and the German Empire . 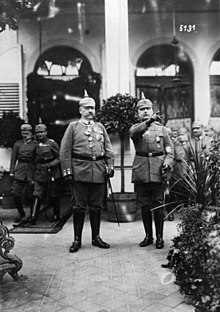 When the First World War broke out in 1914, the GHQ included the following group of people in addition to Kaiser Wilhelm II as Supreme Warlord :

In the further course of the war an Austro-Hungarian Plenipotentiary General joined them later from the Ottoman Empire and Bulgaria .

The Chancellor and the Minister of War were represented in the later course of the war because they could not be permanently absent from Berlin. In total, up to 5000 people belonged to the GHQ during the war. The Supreme Army Command (OHL) increasingly influenced political decisions and soon dominated the Grand Headquarters. In the last two years of the war, the real power in the empire actually lay with the 3rd OHL, above all with Erich Ludendorff .

The Great Headquarters was mobilized by cabinet order of August 3, 1914 and changed its seat several times during its existence. At the beginning of the war it was first in the General Staff Building in Berlin from August 2 to 16, 1914 , then in the Kaiser from August 16 to 30 -Wilhelm-Realgymnasium in Koblenz , from August 30th in the former German embassy in Luxembourg , which subsequently led to tensions. As of September 25, it was located in Charleville-Mézières in the occupied part of France. In April 1915 it was relocated to Schloss Pleß in Upper Silesia . In February 1916 it returned to Charleville-Mézières and in August back to Pless . From January 2, 1917 to March 8, 1918, it was housed in the Parkhotel Kurhaus in Bad Kreuznach and Bad Münster am Stein-Ebernburg . The emperor resided in Bad Homburg Castle . On March 8, the main headquarters was moved to the Hotel Britannique in Spa , Belgium , where it remained until the end of the war. In Spa, the emperor resided in the Villa La Fraineuse owned by the Belgian industrialist Peltzer. After the armistice , the main headquarters was relocated to Wilhelmshöhe Palace , where it remained until February 11, 1919. The last time it was moved to Kolberg , where it dissolved on July 3, 1919. 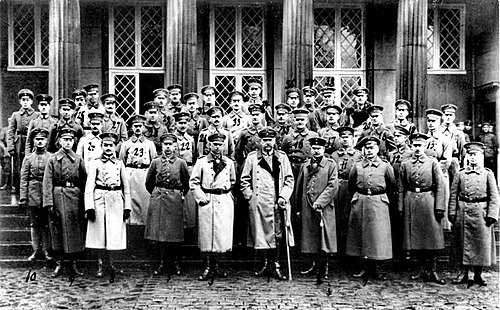 As an honor guard and guard guard of the Grand Headquarters, the staff guard had several formations:

In the course of the war the need for further support troops became apparent, so that in 1918 the following were available:

With the November Revolution of 1918, the debate broke out as to whether the Kaiser should resign or seek the honorable death of a soldier at the front . Wilhelm evaded it by traveling to Great Headquarters in Spa on October 29th. On November 9th, he let Chancellor Max von Baden know that he wanted to remain King of Prussia but would forego the imperial crown. In the afternoon, too late, the telegram arrived in Berlin. In view of the demonstrators who had penetrated into the government district, the Reich Chancellor had arbitrarily announced Wilhelm's waiver of both crowns at lunchtime. Wilhelm traveled from Spa to the near Dutch border on November 10th and asked Queen Wilhelmina for asylum .