Bad Münster am Stein-Ebernburg is located between 108 and 320 meters above sea level at the foot of the Ebernburg in the porphyry mountain country of Münster am Stein , part of the North Palatinate mountains , with forests and vineyards, framed by the rocky massifs of the Rheingrafenstein and the Rotenfels on the Nahe .

The greatest density of graduation towers in Germany (around 1.4 km) extends in the Salinental from the core town of Bad Kreuznach to the spa area of ​​Bad Munster.

Münster am Stein around 1900

While Bad Münster was Prussian from 1815 to 1945 , Ebernburg belonged to the Palatinate (Bavaria) and was its northernmost municipality. The different history of the districts lives on to this day in the church affiliation, as Bad Münster belongs to the Evangelical Church in the Rhineland or the Diocese of Trier , while Ebernburg belongs to the Evangelical Church of the Palatinate or the Diocese of Speyer .

Münster was first mentioned in a document around the year 1200. The place was founded below Rheingrafenstein Castle . Until the 19th century it was a village with a few houses around the old St. Martin's Church. The population devoted themselves to salt extraction, fishing in the Nahe, some agriculture and, at times, copper mining in the Huttental .

1859 was Nahe Valley Railway and 1871 alsenz valley railway built, which allowed the village with his since 1478 occupied bathing the upswing for much frequented spa, which in 1905 was given the name "Bad" awarded. The basis are the brine springs containing radon .

During the Second World War , the area around the railway bridge in the direction of Salinental was partially destroyed by numerous bomb attacks. Bad Münster has a rail connection and lies on the Bingen – Kaiserslautern and Frankfurt – Saarbrücken routes.

The place underwent a major change in face in the post-war years due to the expansion of the spa infrastructure.

View over the Nahe to Ebernburg

Ebernburg has been an important village with a long tradition in viticulture and agriculture since the Middle Ages. The first written record dates from 1212, when the Counts of Saarbrücken to the Monastery of St. Cyriac in Worms gave the Ebernburger church.

In the 14th century even the elevation to the city was planned. The old town center, the old village, which can still be seen in the cityscape, was surrounded by a wall ring with a connection to Ebernburg for centuries . Ebernburg has experienced a rapid expansion outside of this wall ring since the beginning of its spa activities at the end of the 19th century, which has not yet been completed. At the turn of the 20th century, the wall was laid down to the still visible foundation of a city tower.

Bad Münster am Stein-Ebernburg is designated as a local district and therefore has a local advisory board and a local councilor .

The local council consists of thirteen local council members. In the local elections on May 26, 2019 , the advisory board members were elected in a personalized proportional representation. The distribution of seats in the elected local council:

The head of the village is Bettina Mackeprang (CDU). In the local elections on May 26, 2019, she was confirmed in office with 68.7% of the votes.

Until the incorporation in 2014, the city ​​council of Bad Münster am Stein-Ebernburg consisted of 20 council members, who were last elected in a personalized proportional representation in the local elections on June 7, 2009 , and the honorary city ​​mayor as chairman. This was most recently Anna Roeren-Bergs from the CDU.

Distribution of seats in the elected city council: 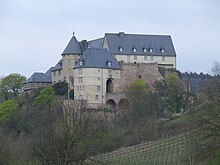 Bad Munster am Stein-Ebernburg spa gardens, photographed from the Rheingrafenstein

The city's sights include the rock formations of the Rotenfels , the Rheingrafenstein with the castle ruins of the same name directly on the Nahe, and Ebernburg Castle with the Hutten-Sickingen monument .

The present form of the graduation tower for salt extraction in Bad Münster am Stein has been documented since 1729 . The weakly salty water of the brine spring was formerly carried by water wheels and is now conveyed to the graduation tower with electrically driven pumps. From there, countless water droplets trickle down the eight-meter-high blackthorn walls into a collecting basin, while the surrounding air is enriched with various salt components such as iodine, bromine and strontium ions as well as the noble gas radon. The salt gradient (proportion) of the brine is increased by the evaporation of the water while it trickles down into the collecting basins. The water wheels and some of the art (linkage for power transmission) can still be viewed.

The oldest secular building in Bad Münster am Stein-Ebernburg is the former Kurpfälzische Unteramt at Burgstrasse 13. The year 1556 is carved into the lintel of the Renaissance part. Investigations of this part of the building also show older wall remains from the Middle Ages under the Renaissance walls.

The Hahnenhof, first mentioned in 1560, is considered to be the oldest property in the Bad Münster district. The narrow, so-called tithe barn with a half-timbered upper floor was the tax office for natural produce at the time.

The Kurmittelhaus in the Kurpark, built in Art Nouveau style in 1911, is one of the most beautiful half-timbered buildings in the region. It contains the fountain hall with the healing springs Maximilianquelle and Rheingrafenquelle, which rise in three glass tubes.

Special events are the medieval Ebernburg market on the third weekend in September and the Christmas market in the spa gardens.

In the Kurmittelhaus, in the rooms of the former local history museum, the Nahe nature station is housed, where animals from the region can be viewed in the warm season, especially the local dice snake .

Spa guests have been an important source of income in the past few decades. After a few years in which the health resort was in decline, the number of guests is slowly increasing again. Most of the businesses in the district are tourist businesses (accommodation, restaurants) and wine-growing businesses . There is also a cork wire factory, in which the locking wires for sparkling wine and champagne stoppers are produced.

The Drei-Burgen-Klinik of the Deutsche Rentenversicherung Rheinland-Pfalz is a rehabilitation clinic for people with cardiovascular and orthopedic diseases .

Bad Münster am Stein-Ebernburg is located on the Nahe Valley Railway Bingen - Saarbrücken ; the station Bad Münster the branches alsenz valley railway to Kaiserslautern from. It is located in the area of ​​the Rhein-Nahe local transport network . The Ebernburg station was abandoned in the 1970s.

Bad Münster am Stein-Ebernburg can be reached by car via the B48 as well as the state roads 235 and 379.