Main battle line is a redirect to this article. For the German right-wing rock band, see Hauptkampflinie (band) . 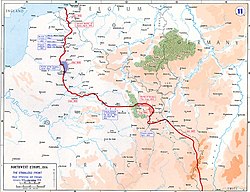 The front is the width of the space occupied by a unit of troops or the armed forces of a country between the extreme limits of the wings . In war it is the border or line of contact between opposing forces.

The term was borrowed from Italian ( fronte ) via French ( front ) into German in the 17th century and goes back to the Latin frons (forehead, front). Originally only used in fortresses (front side, side of the troop formation facing the enemy or fortification), it took on the meaning of battle line or battle zone in World War I , again taken from the French . Accordingly, it is not found in older battle or war descriptions. Based on the conceptual understanding that emerged in the First World War, derivations emerged in a short time. States which are located at spaced locations in the war to lead a multi-front war (Germany had in the First and Second World War, each one Eastern and one Western Front). Extensive fronts can be conceptually divided ( Alpine front ). The increasing involvement of the own hinterland in the fighting (e.g. by bombing) was met, also with propaganda intentions, by coining the term home front .

Even if fronts are shown as lines in cartographic works, these are actually zones of in part not insignificant depth. The understanding of the depth of this space varies depending on the management or observation level. While at the national level the entire front combat zone ( NATO term: Forward Combat Zone) with a depth of approx. 50 kilometers is referred to as the front, the staff members of a division only consider the relatively flat battle strip of a battalion (approx. 5 kilometers deep) as the "front" . The stage , also known as the supply room, begins behind the front . The area on the other, hostile, side at the same depth must also be added to the front, which, depending on the perspective, has a depth of between 10 and 100 kilometers.

As early as the First World War, the concept of the main battle line (HKL), which was common in the German military until 1945 , was coined to differentiate more clearly between the various combat zones . The self-explanatory term made it possible to linguistically connect the places where the actual, main battle took place, while ignoring all places where subordinate, insignificant battles with infiltrated or broken-in but cut off enemy took place, to an imaginary line. In the Wehrmacht , the area in front of the main battle line was called the apron . In this one battalion per regiment was deployed in anticipation of attacks, while the second occupied the main battlefield behind the main battle line and the third was kept available as a battle reserve behind it. The apron thus corresponded to the space between today's VRV and the security line. In the course of the war, people started to occupy this area only with security forces and scouting troops and to deploy more troops or at least a larger proportion in the main battlefield. In particular, the infantry strengthened the HKL for defense by expanding positions in open terrain.

The concept of the front edge of the defense is a new creation of the Bundeswehr . This is entered in situation maps as a wide, black lead line and referred to as the Front Edge of Defense (abbreviated: VRV) (NATO term: FEBA, Forward Edge of Battle Area). Before the actual battle begins at the VRV, the so-called safety line (abbreviated: SL; NATO term: FLOT, Forward Line of Own Troops) is located in front of it at a distance of 5 to 10 kilometers. There are scouting troops and field posts that are directly led by the association or the superordinate large association as security troops in order to disguise the VRV, to give the troops deployed there an advance warning and to force the enemy to deploy prematurely. Alarm posts immediately secure the troops at each sub-unit.

As a line of guidance, the VRV is important for the geographical deployment of forces and for the context of defense. It thus serves as an orientation for unarmored combat troops in a developed position, as well as for positions and changing positions of the armored forces. The exact location of the VRV should be concealed as long as possible before enemy reconnaissance, especially since intense enemy artillery fire from the Warsaw Pact was expected on reconnaissance positions. The enemy fire should go into the void if possible, so as not to endanger the cohesion of the defense. For this purpose, camouflage and deception receive special attention, as well as the renouncement of a schematic structure of one's own defense and a linear and easily calculable structure of the defending troops. The aim of the defender is to crush the enemy attack as far as possible before the VRV.

As a result of the fight in the depths of the enemy area, the area in which the combat of the combat troops is conducted is called the Closed Combat Zone , with a depth extending to the range of the respective subordinate artillery. The subsequent zone is considered the Deep Combat Zone , in which battlefield lockdowns (BAI) are used to delay and wear down enemy forces . The rear combat zone is your own rear (supply) space in which enemy special forces , airborne, leaked or breached enemy troops and reconnaissance forces operate. Targets for the battle in the depths of the enemy space are staffs of higher command authorities, supply columns on main support routes MSR, telecommunication facilities, logistics facilities and special combat equipment as well as parts of the terrain as key areas, movement lines and narrow areas as well as structures such as bridges.