This article covers the Brentano family. For their members and other meanings, see Brentano (disambiguation) . 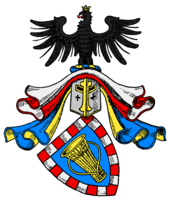 The Brentano family, belonging to the Lombard nobility , can be traced back to a family of farmers who lived in the wine-growing region around Lake Como . Brenta is the name for a wine butte whose image on a blue background in red and silver bordered shields is inserted into the family coat of arms of the "nobiles de Brenta, dicti de Brentanis" , framed by the Lombard lion and the serpent of the Visconti , the dukes of the Lombardy . The imperial eagle , the decoration of the Ghibellines, appears in the head of the shield .

Lines and nobles from Brentano

In the 14th century the family divided into the different lines:

There are also two other noble families from Brentano:

Both sexes have completely different coats of arms than the primitive nobles of Brentano.

Decorative coat of arms from the family table of the Brentanos

The ancestral Arms of Brentano: Blazon : "Within a red-silver gestückten Bordes in blue a golden Butte (Italian: Brenta). On the blue and gold bulging helmet with red and silver covers on blue and gold there is a growing gold crowned, red-tongued black eagle . "

There are also today ( gemehrte ) Coat of arms not enforceable lines, (gemehrte) arms of Brentano from the home Gnosso of 1857 and the arms of the letter noble Brentano Brent Home from 1745 and the Barons Brentano Brent home of the 1787th

The lines of the Brentanos in Germany

All lines settled in Frankfurt am Main during the 17th century , which was then a center of long-distance trade between Italy and Germany. The Brentanos traded mainly in oriental and Italian wines, spices and spices, including the coveted citrus fruits . 1649 is the first family member Martino Brentano from the Cimaroli line, who initially ran his office in the Schweizer Hof and later in the City of Antwerp house on the Neue Kräme . In 1673 Carlo Brentano (1644-1700) from the Gnosso line lived in the same house. His son Joseph became a partner in the Bellini & Brentano company , which among his descendants was divided into the companies Joseph Brentano (until 1827) in Töngesgasse and Anton Maria Brentano & Son (until 1794) in Schnurgasse. In 1695 Antonio Brentano came to Frankfurt from the Toccia line and founded a trading house in the Nuremberg court , which existed until 1848.

The Brentanos, later known beyond the borders of Frankfurt, came from the Tremezzo line . The progenitor of the German lines was Magnifico Ser Stefano de Brentano di Tremezzo , who, like his son Magnifico Don Bernardino de Brentano di Tremezzo, held the dignity of consul in Tremezzo. The grandson Giovanni-Pietro d. Ä. held this office. He had several children with his second wife, Donna Lucretia de Stoppanis. Nobile Stefano was their eldest son. He was born on June 5, 1605.

The house at the Golden Head in the Große Sandgasse

His son Don Domenico (born January 8, 1651 in Tremezzo, † 1723), married to Donna Maria-Magdalena Bellini, moved the headquarters of his Milan trading company to Frankfurt am Main in the Nuremberg court in 1698 . He already gave his son the name of the local patron saint Martin, which is very popular in the Archdiocese of Mainz, as his middle name. In contrast to other family lines, the Brentanos no longer carried their nobility titles in Frankfurt. Like other merchant families who immigrated from Italy, e.g. B. the Bolongaro and the Guaita , the Brentanos adhered to their Roman Catholic denomination and were therefore initially unable to acquire citizenship in the strictly Lutheran imperial city of Frankfurt . With generous foundations they supported the collegiate churches and monasteries that remained in Frankfurt after the Reformation , including the Carmelite monastery in particular .

Domenico's son Domenico Martino Brentano (* 1686 in Tremezzo, † September 19, 1755 in Frankfurt am Main) married Donna Maria-Elisabetha Brentano-Riatti (1700–1736). After a successful trial against the City Council of Frankfurt, he was the first Catholic to acquire Frankfurt citizenship in 1740. He extended the business connections of the trading company Domenico Brentano & Sons to Holland, founded branches in Amsterdam and Mainz . He maintained close relationships with other Brentano branches in Vienna , Nuremberg , Günzburg , Trieste and Naples .

His son Pietro Antonio , called Peter Anton (born September 19, 1735 in Tremezzo, † March 9, 1797 in Frankfurt am Main) was considered one of the most important Frankfurt merchants of his time. Until 1753 he was a partner in the company founded by his grandfather, then he founded his own trading company in the Nuremberg court. In 1777 he bought the Golden Head house in Grosse Sandgasse. Appointed Privy Councilor and resident of the Free Imperial City of Frankfurt under the Elector of Trier Clemens Wenzeslaus of Saxony , he became general collector of the finances of the Kurheinische Kreis in 1785 and then lived most of the time at the court of the Elector in Koblenz . He played the violin and wrote poems in Italian, but probably spoke only broken German until his death.

After the death of his second wife Maximiliane, a daughter of the then Electorate Chancellor Georg von Lichtenfels, known as La Roche, he handed over his business to the sons Franz and Georg and retired completely to Koblenz, the royal seat. There he married a third time, this time Friederike von Rottenhof (1771–1817) with whom he fathered two children, both of whom died early.

The following descendants came from the Friedberger line of Jacob Gustav Adolph Brentano and his wife Auguste Eleonore Charlotte Hofmann (1821–1902):

This line originated among other things

Property owned by the Brentanos