This article deals with the philosopher Franz Brentano. On the merchant see Franz Dominicus Brentano . 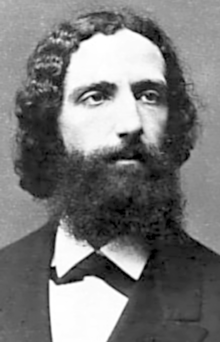 Franz Clemens Honoratus Hermann Josef Brentano (born January 16, 1838 in the then already dissolved Marienberg Monastery near Boppard on the Rhine ; † March 17, 1917 in Zurich ) was a German philosopher , psychologist and founder of nude psychology . Originally a Catholic priest, Brentano left the Church to protest against the proclamation of the dogma of the Pope's infallibility and then, as an unaffiliated professor in Vienna, had a lasting impact on the young generation of philosophers. Among his listeners were Edmund Husserl , Tomáš Garrigue Masaryk and Sigmund Freud .

The Brentano family originally came from Lombardy , but had lived in Germany for several generations. Franz Brentano's parents were the writer Christian Brentano and his wife Emilie Brentano nee Genger. One brother was the economist and social reformer Lujo Brentano . Clemens Brentano and Bettina von Arnim , who are counted among the most important personalities of German Romanticism , were uncle and aunt on their father's side. 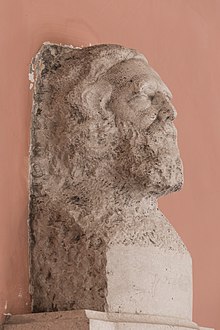 Bust of Brentano by Theodor Georgii in the arcade courtyard of the University of Vienna .

Franz Brentano grew up in Aschaffenburg and studied in Munich , Würzburg , Berlin and Münster . He presented his dissertation on the concept of “ beings ” to Aristotle in Tübingen .

After his habilitation in Würzburg in 1866, Brentano taught philosophy there . In addition to philosophy, he had also studied theology and was ordained a priest in 1864 . In the run-up to the First Vatican Council , he campaigned at the highest ecclesiastical level against the canonization of papal infallibility ; but he had given up the Christian faith as early as 1870 because of the problem of the dogmas of the Trinity and the Incarnation as well as the absolute requirement to believe. After long hesitation, also out of consideration for his pious mother, he drew the conclusions and in 1873 resigned from his priesthood. He also ended his teaching activities in Würzburg and was appointed professor of philosophy in Vienna in 1874. Since he could not marry under Austrian law as a result of his ordination, he became a Saxon citizen in Leipzig in order to be able to get married. Nevertheless, he had to give up the professorship. In 1879 he resigned from the church. This had only recently been made possible in Austria, namely by the law of May 25, 1868. In 1880 he resigned from the professorship. However, he remained in Vienna as a private lecturer until 1895 .

His son Johann Michael (Giovanni) was born on June 27, 1888 (died 1969). After the death of his wife Ida Lieben (May 17, 1852 to March 13, 1894) from the Austrian banking family Ignatz Lieben (1809–1877), he moved from the Palais Todesco in Vienna, Ringstrasse, and in 1895 moved to Florence . In 1897 he married Emilie Rueprecht for the second time . From 1903 he slowly lost his sight . He acquired the monastery tavern of Schönbühel Castle in the Wachau as a temporary holiday home. After Italy entered the First World War , he fled to Zurich in 1915 , where he went blind after two eye operations and died on March 17, 1917 of an appendix infection. Initially buried in Zurich, his bones were exhumed and cremated at the request of the family in 1953 and his urn was buried in the family crypt in the old town cemetery in Aschaffenburg ( Lower Franconia ).

From 1914 he was a corresponding member of the Prussian Academy of Sciences .

Brentano closely linked philosophy with psychology , which for him was the basic science par excellence. He was the founder of nude psychology , which also influenced Edmund Husserl , Alexius Meinong , William McDougall , Sigmund Freud and Carl Stumpf , among others . They belong to the so-called Brentano School . In Prague in particular, his teachings were passed on by the lecturers at Charles University and discussed in clubs such as Café Arco and in the Louvre circle by many supporters such as Emil Utitz . Like other philosophers z. B. Felix Weltsch , a close friend of Max Brod and Franz Kafka , was rather critical of Brentano's teachings and represented the views of Christian von Ehrenfels . Likewise, Meinong later turned away from Brentano, since he represented a different view of the psychological term " intentionality ". One of his most important students was Tomáš Garrigue Masaryk . The work of Brentano exerted a strong influence on the young Martin Heidegger .