The Töngesgasse is a shopping street in the Old City of Frankfurt am Main . It runs south parallel to the Zeil from Liebfrauenberg to Fahrgasse . In contrast to the Zeil, the retail trade in Töngesgasse does not consist of branches of supraregional chains, but of more highly specialized owner-managed specialist shops.

The street was built after the Hohenstaufen city expansion in the 12th century. The old town essentially had a network of main streets crossing each other at right angles, including today's Töngesgasse:

In 1236 the Antonites founded a farmyard in the street, to which a church was later added, the Antoniterkloster . The street owes its current name to this monastery ( Antonius  → tönges ). The monastery, hardly used since the Reformation, was demolished in 1803. City architect Johann Georg Christian Hess built a series of multi-storey classicist apartment buildings in his place in 1810 .

Originally, the road had no cross streets to the north. The only passages through the Staufen wall , which ran immediately to the north, were the Bornheimer Pforte on Fahrgasse (at the south-western corner of today's Konstablerwache-Platz) and the Katharinenpforte at the Hauptwache, more than 500 meters away . Opposite the Trierischer Hof, at the end of the 16th century, a street was broken through the development of Töngesgasse and the Staufen wall, which it covered, in order to create a further connection to the Zeil, today's Hasengasse . Later the Schärfengäßchen was built, which leads behind the choir of the Liebfrauenkirche to the Holzgraben, but does not lead from there to the Zeil. To this day, these are the only two roads that branch off from Töngesgasse to the north. The street of the Neue Kräme was extended around 1850 by a breakthrough (the Liebfrauenstrasse) west of the Liebfrauenkirche to the Zeil.

The leader of the Fettmilch uprising of 1614, the gingerbread baker Vinzenz Fettmilch , lived in Töngesgasse in the Zum Hasen house (roughly at the location of today's house number 34). On the day of his execution, February 28, 1616, his house including the foundation walls was demolished. In its place was the Fettmilch Cookie , on which a pillar of abuse recorded his crimes in German and Latin. The neighboring house on the northwest corner of Hasengasse, Zu den Drei Hasen , was the birthplace of the Senckenberg brothers , the lawyer Heinrich Christian (1704–1768), the natural scientist and founder Johann Christian (1707–1772) and the lawyer Johann Erasmus (1717–1768). 1795), who spent the last 25 years of his life as a prisoner of state in the Hauptwache . To the west of the Fettmilchplätzchen was the Zum Lindwurm house, first mentioned in 1405 , and owned by the Counts of Schönborn as Schönborner Hof from the 16th to the 19th centuries . The courtyard was demolished in the second half of the 19th century. The Rosenberg house next to it is often incorrectly referred to as the Schönborner Hof due to a misspelling by the architect Claus Mehs . The rear building and the stair tower survived the Second World War. The Emmerich sausage factory was located in the Rosenberg area until the 1970s.

On June 26, 1719, the Great Christian Fire destroyed large parts of the northern old town, including Töngesgasse. Over 400 houses were burned in this district, which is mainly inhabited by small craftsmen, and 14 people died in this disaster. The fire had a major impact on the city's building laws. Since then, overhangs of more than one shoe have been banned, and stone ground floors and eaves-standing houses have been prescribed.

In the 18th century, the Bolongaro families (in the Zum Wölffchen house ) and Brentano had their place of business in Töngesgasse.

On August 10, 1814, Heinrich Nestle was born in Töngesgasse , who later emigrated to Vevey in Switzerland and founded the global corporation Nestlé there in 1866 . The 19th century painter Moritz Daniel Oppenheim lived in the house to the two bears (Töngesgasse 40) .

In March 1944, almost the entire old town of Frankfurt was destroyed by the Allied air raids on Frankfurt am Main . Most of the building fabric in Töngesgasse was also destroyed. The baroque rear building and the Renaissance stair tower of the House of Rosenberg survived the Second World War . After the Emmerich sausage factory moved out, the provisional post-war front building was demolished by the Stadtsparkasse and the historic rear building was also replaced by a new building with a curtain-walled historicizing facade. Only the stair tower from the Renaissance is original. The Stoltze Museum has been located here since 1978 . The front building now extends over house numbers 34 and 36.

Reconstruction after the Second World War 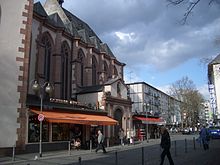 After it was destroyed by air raids in 1944, Töngesgasse was rebuilt on the same route and under the same name. However, the urban situation and the adjacent road network changed completely.

About halfway down Töngesgasse, Hasengasse was laid out as a new traffic connection between the main axes Zeil and Berliner Straße (the latter was built in the course of the reconstruction instead of the narrow Schnurgasse). The Hasengasse was extended along the previous Trierische Gasse to Berliner Strasse, where it merges into Domstrasse. This created a continuous connection from the Zeil to the cathedral tower that had never existed before.

While some original parcels were still preserved in the western half of Töngesgasse and “only” one cross street (Graubengasse) disappeared, nothing of the eastern street section between Hasengasse and Fahrgasse remained in its old condition.

Most of the north side of the street is occupied by the Konstabler multi-storey car park , which opened in 1959 and is the city’s second car park . On the southern side were instead of the previous three, to Schnurgasse Gelnhäuser alley and Lindheimer (currants) alley a U-shaped road called created "In Trierischer Hof" leading blocks Steingasse. Within the "U" there are two row buildings with the narrow side facing Töngesgasse, surrounded by green spaces that are not typical of the old town. The street area was closed to the south only by single-storey shops along the line of the street.

Between the western arm of the "U", which follows the route of the former Steingasse, and the Trierische Gasse, now, like the section north of Töngesgasse, called Hasengasse, the new building of the main office of the Stadtsparkasse Frankfurt was built until 1956 , which continued until the merger with the larger Frankfurter Sparkasse from 1822 to Frankfurter Sparkasse 1989 the company's headquarters remained. Today the city library is located here.

The rest of the Rosenberg house, visible after the front building was torn down, Töngesgasse 34–36

Today, Töngesgasse is an important shopping street in the city of Frankfurt, but with less pedestrian traffic than the prime locations like the Zeil or the prime locations like the Neue Kräme. It is also not designated as a pedestrian zone , but can be accessed by motor vehicles. It is the location of specialized retail stores, some of which have existed for more than 100 years, such as the W. Wächtershäuser haberdashery shop since 1822, the Hensler optician's shop since 1864, the Andreas seed shop since 1868, the Gabler leather shop since 1877 or the Dotzert knife and weapon shop since 1879. Café Mozart is one of the most famous coffee houses in the city.

The street retailers are united in the Töngesgasse eV interest group. Every year in August, the interest group organizes a street festival, the Antoniterfest .

In Schönborner Hof (Töngesgasse 34-36) there is an octagonal stair tower from the Renaissance (around 1600), which until 2014 housed the Stoltze Museum , which has been located in Markt 7 (New Old Town) since 2018.

Töngesgasse runs parallel to the Zeil only around 100 meters south. The development of public transport therefore takes place on the large rapid transit node Hauptwache and Konstablerwache on the Zeil.

Car access is via Berliner Straße and from there via Fahrgasse and Hasengasse. In the street itself there are paid parking spaces in the street area and in the Konstabler multi-storey car park.

Töngesgasse is part of the urban cycle network . Together with the Katharinenpforte, Bleidenstrasse and Fahrgasse, it is signposted as a bypass of the Zeil pedestrian zone. The eastern section is designated as a bicycle road. In the western area, cycling against the one-way street is permitted.