The Liebfrauenberg in Frankfurt am Main is a square in the historic old town that is considered one of the most beautiful squares in the city. Historically, it was the second largest after the Römerberg . 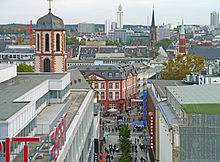 From the Zeilgalerie, view of Haus zum Paradies (2012)

The Liebfrauenberg is located southeast of the Hauptwache or south of the main shopping street Zeil and north of Paulsplatz , Paulskirche , Römerberg and Römer .

The square represents a link in one of the three north-south axes of the old town. Starting from it, the street Neue Kräme , which has been a pedestrian zone since the 1960s, runs south and provides a connection between Liebfrauenberg, Paulsplatz, Römerberg and the former Fahrtor to the former port on the banks of the Main .

The Liebfrauenberg lies in the center of the northern old town. It is dominated by the Gothic Church of Our Lady . Opposite it is the Haus zum Paradies, which is one of the few large buildings from the Baroque era that has been preserved in the city. As a corner house, it borders on Liebfrauenberg and Neue Kräme. In the middle of the Liebfrauenberg there is a large fountain with a high column and sculptures.

In the center of an oval fountain basin with a curved parapet and a bulging rim, a rusticated obelisk with baroque decorative elements rises on a square fountain stick. On the sides of the bronze plaques set in here by the bell founders Johann Georg and Johannes Schneidewind, Moenus and Rhenus (Main and Rhine) pour water from jugs into large shell basins that rest on the crossed bodies of dolphins. The originals of the river god figurines Moenus and Rhenus are in the park of the Liebieghaus . The water flows down from the mussel basin into the actual fountain basin. Additional water flows directly from the mouths of the dolphins into the basin. The Frankfurt city arms decorate the front of the column. Its top has a gold-plated sun.

The Liebfrauenbrunnen is an attraction for strolling tourists and locals, especially in summer.

Our frawen berg, the historic Liebfrauenberg with fountain and Liebfrauenkirche in 1552, siege plan of the city of Frankfurt by Conrad Faber von Creuznach , small excerpt

Development on Liebfrauenberg from the post-war period

In the Middle Ages , the Liebfrauenberg was one of the most important squares in Frankfurt's old town, the second largest after the Römerberg. Glasses, dishes and other household goods were offered here. The name of the street Neue Kräme (from Kram, also Neuer Markt) that touches the square still indicates this today. As a market and fair street, the Neue Kräme expanded the old market on the Römerberg and was at the same time an important north-south connection.

The city wall from the 12th century, the so-called Staufen wall, ran right next to the neighboring Liebfrauenkirche . Remains of this wall can still be seen on the west side of the church, facing Liebfrauenstrasse.

The Liebfrauenberg lies in an area between today's Berliner Straße and the Staufenmauer, an area that the city gained in the course of the second city expansion in the 12th century. It differs from the tangle of irregularly laid out alleys of the original old town in the area of ​​the former Carolingian Palatinate and the imperial cathedral of St. Bartholomew by a street grid laid out almost at right angles. In the quarter between the main streets Neue Kräme, Töngesgasse, Fahrgasse and Schnurgasse (the latter was roughly in the course of today's Berliner Straße) there were, for example, twelve small, parallel lanes running from north to south.

The Liebfrauenberg was first referred to as Rossebühel in the 14th century, a name that fits into the context of the nearby Rossmarkt, because horse markets were held there. Merchants looked for nearby accommodation in order to be able to do business in the Gothic halls of the Roman and on the Old Market. The stone house on the Römerberg and the Nürnberger Hof north of the Römerberg, east of Paulsplatz and Neuer Kräme were used for this purpose.

Since 1318 the Liebfrauenberg has been shaped by a small chapel, donated by Wigelo von Wanebach and his wife Katharina von Hohenhaus. The chapel was initially called St. Katharinen, but also Wigelskapelle after the founder. When it was expanded in 1325 and made a monastery, the Archbishop of Mainz ordered it to be renamed To Our Lady or St. Mary's Church. The Liebfrauenberg was paved as early as 1416. From 1490 the ox market was held there.

At the end of the 15th century a fountain was built on the square. According to the siege plan of 1552, it was a round draw well, from which the residents of the surrounding houses could supply themselves with water. On this map of the city of Frankfurt by Conrad Faber von Creuznach , the Rossebühel is already referred to as Unser frawen berg, our women mountain. The place was later popularly named Liebfrauenberg, based on the church. In 1573 the attempt to establish a trade fair for merchants and to set up exhibition stands failed. There was no demand. But the square remained a central and popular place where urban life pulsed.

The draw well was transformed into a fountain in 1594. In 1769 this fountain was demolished due to its dilapidation and in 1770 it was created and rebuilt in sandstone by the sculptor Johann Michael Datzerat according to a plan by city architect Johann Andreas Liebhardt (1713–1788) in the late Baroque style.

A road breakthrough created a connection from Liebfrauenberg to Zeil in 1855. Previously there was no connection between the old and new towns along the former Staufen wall between Bockenheimer Pforte and Friedberger Pforte.

In 1944, the historic Frankfurt old town was largely destroyed by the air raids on Frankfurt am Main and the resulting firestorms , including most of the buildings around the Liebfrauenberg. Only a few more massive commercial buildings built during the Wilhelminian era survived the inferno. The Liebfrauenkirche was only rebuilt in 1956.

During the Second World War , the fountain on the Liebfrauenberg with its obelisk was protected by a sturdy wooden construction, which, however, was mainly intended to protect the sculptures from destruction. The upper part of the obelisk and the fountain basin remained free and thus unprotected, but miraculously spared from the bombs of the air raids on Frankfurt am Main .

When the fountain showed signs of dissolution in the 1960s, the figures and the column were copied and rebuilt in 1970 by the sculptor Kurt Zobel. Since July 1973 the city administration has allowed water to flow into the well again.

Among other things, a flower market takes place on Liebfrauenberg in the warm half of the year. During Advent, the area is part of the Frankfurt Christmas market , which runs through the entire Neue Kräme over Liebfrauenberg and Paulsplatz to Römerberg and down to the Main.

Shops, a branch of a credit institute, a pharmacy and restaurants are grouped around the Liebfrauenberg. Depending on the weather, cafés offer seating in the square, including an ice cream parlor. A butcher's shop offers cold and warm dishes to take away or to consume on site.

The Liebfrauenberg has no direct connection to local public transport . The next stops are with the S-Bahn lines S1 to S6, S8 and S9 as well as the underground lines U1 to U3 and U6 to U8 underground at the northwestern Hauptwache and with the tram lines 11 and 12 at the Römer stop / Paulskirche in Braubachstraße to the south. From both stations there is a walk of about 5 - 8 minutes.