The title of this article is ambiguous. For the resistance fighter Friedrich Carl von Savigny (1903–1944) see Edgar-Jung-Kreis . 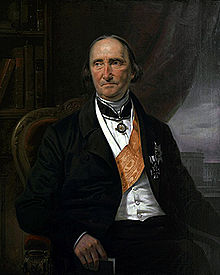 Friedrich Carl von Savigny [ saviɲi (*] 21 February 1779 in Frankfurt am Main ; † 25. October 1861 in Berlin ) was a German jurist and Kronsyndikus . He is considered the founder of the historical school of law .

Savigny came from a Lorraine family who emigrated to Germany's southwest in 1630 in order to serve the local rulers . The name Savigny is said to be derived from a castle of the same name near Charmes in the Moselle valley . His father Christian Karl Ludwig von Savigny (1726–1791) was the secret councilor of the Prince of Isenburg and later lived in Frankfurt am Main . His mother Henriette Philippine Groos (1743–1792) was a daughter of the Groos Privy Council from Zweibrücken and died only a few months after her husband.

After Savigny became an orphan at the age of 13, his guardian Constantin von Neurath raised him in Wetzlar , where he attended grammar school. In 1795 he enrolled at the University of Marburg to study law and enjoyed Anton Bauer and Philipp Friedrich Weiß . Weiss also tried to direct him to classical studies , as he noticed that Savigny felt a noticeably early and goal-oriented connection to scientific work. Weiss stated of Savigny on September 1, 1797:

"He has given so much evidence of his excellent talents, keen judgment and thorough knowledge of Roman law that I have no hesitation in declaring him the most excellent of all my listeners in my academic teaching post."

In the summer of 1799, Friedrich Carl von Savigny lived for some time on an estate belonging to the von Leonhardi family in Lengfeld (Odenwald) . Friedrich von Leonhardi was a college friend from Marburg. There he met 19-year-old Karoline von Günderrode , who fell in love with him. After studying in Jena , Leipzig , Göttingen and Halle , he returned to Marburg in 1800. Since he was financially independent, he was able to use his years of study immigration to make many personal contacts, to exchange experiences and to study manuscripts and excerpts. After returning to Marburg, he received his doctorate in the same year . His dissertation dealt with the topic: De concursu delictorum formali . Immediately afterwards he went traveling and met Clemens Brentano in Jena, mediated by his schoolmate Hans von Bostel from Wetzlar . In the spring of 1801 Brentano introduced Savigny into his family and then traveled with him along the Rhine.

In Marburg he taught criminal law and the Justinian Pandects as a private lecturer . The Brothers Grimm were among his students . Savigny completed his habilitation in 1803. He published his famous study The Right of Possession and quickly became a celebrated teacher. In May 1803 he got engaged to Clemens' older sister Kunigunde (called Gundel ) and married her the following year in April 1804. The wedding took place in the Protestant church in Meerholz , although his bride was Catholic. In 1808 he was appointed to a full professorship for Roman civil law at the University of Landshut , where he taught for only three semesters.

Wilhelm von Humboldt recommended Savigny to King Friedrich Wilhelm III. von Prussia as one of the most excellent German lawyers for the Berlin university to be founded and at the same time sent the latter the message: “You have to be there sooner than the university.” Clemens Brentano also suggested the Prussian capital to Savigny, but Savigny tied himself to one Intermezzo from 1808 in Landshut , only from April 1810 to a job in Berlin. The university went into operation in October 1810 and Savigny taught the " Institutions " and "Legal History" daily and weekly " Lien Law ".

In addition to his teaching and research activities, he held the office of rector in 1812/13 and led the arbors of the "Spruch-Collegium" created by the law faculty. It was an extraordinary court that gave its assessment to ordinary courts at their request. In addition, Savigny taught the Prussian crown prince as a private teacher in the subjects of Roman law , Prussian law and criminal law .

In 1814, as a response to Thibaut's theses on the necessity of a general civil law for Germany, his pamphlet Vom Beruf Our Time for Legislation and Jurisprudence appeared . In the same year his son Karl Friedrich von Savigny was born , who would later make a name for himself as a diplomat. In 1815, together with Karl Friedrich Eichhorn and Johann Friedrich Ludwig Göschen, he founded the journal for historical jurisprudence as an organ of the historical school of law . The first volume in his history of Roman law in the Middle Ages was published in 1815 and was not completed until 1831.

Savigny is also considered to be the founder of modern international private law , for which he developed the guiding principle in Volume 8 of his system of contemporary Roman law that the determination of the law applicable to a legal relationship should be based on where it is "based on its peculiar nature" have.

His academic activity ended in 1842 when Friedrich Wilhelm IV was appointed Grand Chancellor . At the same time, he became Prussian “Minister for the Revision of Legislation” in the Ministry of Legislation. In this function, his particular merit is the preparation of the legislation for the bill of exchange law as well as the future law of obligations and commercial law . When the revolution of 1848 broke out , he resigned. The work Mixed Writings appeared in 1850 and the Code of Obligations in 1853 to supplement the system of today's Roman law .

Chapel of the Court Trages

Savigny died in Berlin on October 25, 1861. It is reported that King Wilhelm I appeared at his funeral with all of the princes. His grave was in Berlin-Mitte in St. Hedwig's Cathedral . In 1875 the coffin was transferred to the chapel of the Hof Trages family estate in today's Freigericht near Hanau . He is buried there with his wife Kunigunde in the chapel of the property , located between the Somborn district and Alzenau in Bavaria .

In his memory, the legal history journal that was once published by Savigny and his colleagues is being continued in three categories as part of a foundation named after him ( GA, RA and KA sections ).

Historical school of law and significance of Savignys

Savigny's concern was the renewal of jurisprudence. He wanted to free them from all rational law speculations that the late natural lawists such as Pufendorf in the radical and Thomasius in the relativized sense pursued. The jurisprudence was essentially only interpreted dogmatically along the received Roman law by the epochal forerunners, in particular by the consultants and, most recently, by the Usus modernus pandectarum . In the course of the renewal, politically uncritical and unphilosophical abstractions, in particular the “anti-tradition of the late right of reason”, should be rejected in favor of a historical-cultural-political mandate. Savigny's ideas were based on Kant's doctrine of law , because Kant had anticipated freedom for the space that the "independent existence" of law would need, to enable the autonomous morality of the person and not to enforce it.

The historical law school founded by Savigny was based on an organically grown folk spirit based on Hegel and Herder . Since Savigny's understanding of law is culture and culture is “spiritual tradition”, and with regard to Roman law even “literary tradition”, the folk spirit nourishes itself from an awareness of this and thus leads to popular beliefs. Savigny did not examine (especially) Roman law from the point of view of the philosophy of history. Instead, his program writings are relevant to judicial and cultural policy and are committed to the Prussian restoration , certainly also due to his personal aristocratic origins. In doing so, he took a moderately conservative stance.

The zeitgeist was shaped by antipodal fundamental decisions, which in literary terms are also reflected in the Weimar Classic . Savigny resolved the dispute with Thibaut. The former stood for a young national feeling that was to be confirmed within the framework of lively democratic politics and active legal practice. On the eve of the Restoration, he also relied on positive law , like the great natural law codifications such as the Civil Code or the Prussian general land law . In addition to being legally binding, he hoped that it would include the will and the needs structure of a current society. Unlike Savigny; he was attached to the aristocratic culture and his reformist approach emerged from the middle of the long European tradition. He focused on the scientific aspect of law and wanted law to be placed in the hands of experienced lawyers. Codifications - as proposed by Thibaut - could not help to humanistic responsible completion of a folk and national spirit, they are snapshots of particular interests, which at the revolutionary civil show spirit of the Code as well as on altstänischen right of Prussia.

In the mid-1960s, the legal historian Franz Wieacker attested to Savigny that, because of his intellectual and aesthetic gifts, he had "become a classic of jurisprudence, a prince of science of his time and a master of our language". As one of the few lawyers of all time, he went into the general educational awareness and wrote “national literature”.

Even Uwe Wesel recognizes in Savigny not only an impressive teaching personality who rebelled with power by the state against the likes favored natural law, so with gifted rhetoric and stylistics -talentierter. Savigny was even "the pillar saint of German jurisprudence" of the 19th century. Savigny had upgraded the professorship at a time when rich aristocrats like him were usually hardly committed to the profession of law teacher.

Paul Koschaker adds: Savigny's school “owes Germany its fame in jurisprudence”, far beyond national borders in Europe, even in the whole world.

Savigny's first major work is already considered a milestone in legal literature, The Law of Possession. A civilistic treatise from 1803. In the appraisal of the work, less emphasis is placed on the legal-dogmatic treatment of the subject, more on the realization of the ideal of a new legal science. The work seems like an artistic overall creation from the science of science, which is no longer focused on source research and interpretation of the sources as in the times of "Usus modernus". It is understood as a sectional draft of the classic dogmatic monograph of German pandect science . The work was updated and expanded in 1806.

From 1815 the history of Roman law appeared in the Middle Ages . In 7 volumes, this conception is devoted to the intellectual mediation of ancient Roman law with Roman law, which was gradually received in Europe from the High Middle Ages , as well as the hermeneutics of the currently applicable legal substances. Savigny particularly emphasizes that the European legal culture (of the present) and the tradition of ancient legal materials form a historical unit. In the introductory article in the journal for historical jurisprudence , founded shortly before in 1814, it becomes clear that Savigny attached great importance to the distinction between “historical” and “unhistorical” schools. The latter he held against wanting to create law on its own strength and insight, beyond any historical understanding.