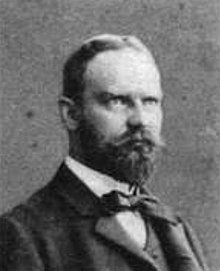 Wolfgang Heine (born May 3, 1861 in Posen ; † May 9, 1944 in Ascona ) was a German lawyer, SPD politician, long-time member of the Reichstag , Prime Minister of the Free State of Anhalt and Prussian State Minister.

Heine studied as the son of the grammar school director Otto Heine (1832-1906) from 1867 to 1869 at private schools in Weimar and Hirschberg, followed by attending grammar school in Breslau . From 1879 to 1884, Heine studied in Breslau, Tübingen and Berlin, first natural sciences and later law. In between he did his military service in 1882 and 1883. From 1881 until his expulsion in 1897, Heine was a member of the Association of German Students . He appeared for this as a speaker and was an employee of the association magazine Kyffhäuser-Zeitung . He studied in Adolph Wagner's seminar . After completing his studies, he was a trainee lawyer in the Prussian judicial service from 1884 to 1889 and an assessor from 1889. From then until 1918 and again from 1920 to 1933 he had a law firm in Berlin.

Heine joined the SPD as early as 1887. He was considered one of the party's most important legal experts and often appeared as a defender in political trials. From 1896 to 1897 he defended Ignaz Auer (and comrades), the accused in connection with the street riots in Berlin-Moabit (1910/11) and from 1912 to 1913 Julian Borchardt . From 1898 to 1918 he was a member of the Reichstag . Heine was of considerable importance for the formulation of the social democratic position in the deliberations on the Reich Association Law . In this context, on behalf of the party executive committee, he carried out a survey on the handling of the previous association law ("Association Quete"). In addition, he gave legal assessments on central domestic political issues, such as the Zabern or Daily Telegraph affair . He also commented on the budget issue within the party. In November 1917 he took part in the 'Bern meeting to discuss the organization of international relations after the war'.

After the November Revolution until July 1919, Heine was a member of the National Assembly and Chairman of the Council of State (Prime Minister) of the Free State of Anhalt. From December 1918 to March 1919 he was also the Prussian Minister of Justice ( Council of People's Representatives (Prussia) ). He was then the Prussian Minister of the Interior ( Hirsch cabinet ) until March 1920 . During this time he was one of the leading figures on the right wing of the SPD.

For Heine in his offices, maintaining public order was more important than democratic restructuring of the administration. The district administrators appointed during the empire continued to serve unchallenged. When local workers' councils complained about their anti-republican behavior, Heine mostly dismissed or ignored the complaints. Even when conservative district administrators asked to resign, Heine usually asked them to remain in office in the interests of “public order”. Heine also rejected complaints from local workers' councils about the withdrawal of financial support by the municipal parliaments in the spring of 1919. One of the failures in his term of office is that after the revolution it took eight months before the district and municipal parliaments formed according to the three -class suffrage were replaced. In addition, he did little to combat the counter-revolutionary activities of voluntary corps , for example in Pomerania , in the summer of 1919. It seems significant that the conspirators of the Kapp Putsch seriously considered offering Heine, Gustav Noske and other leading figures of the right wing of the SPD offices in a future “national” government. At the beginning of the coup it became clear how negligent Noske and Heine had acted in defending against the counterrevolution from the right when it became apparent that the military and administration were riddled with forces hostile to the republic. A condition of the unions to end their general strike after the end of the coup was the dismissal of Noske and Heine. The two ministers anticipated this with their resignation. Also because of the failure of the authorities, he had to resign after the Kapp Putsch. Heine's successor as Prussian Minister of the Interior was Carl Severing , who promoted the democratization of public administration and especially the police.

From 1923 to 1925 he was a member of the State Court for the Protection of the Republic, established with the Republic Protection Act . After leaving the government, Heine continued to work as a lawyer. Among other things, he successfully represented the defendant Nikodem Caro together with Max Alsberg and Rudolf Dix in the Caro-Petschek trial , one of the most complex criminal trials in the final phase of the Weimar Republic . At the beginning of 1933, at the beginning of National Socialist rule , Heine fled to Switzerland.

In addition to his political and legal activities, Heine was the author of numerous legal and political articles. He was an employee of the Socialist monthly magazine , the Berliner Tageblatt and the archive for social legislation and statistics .

Wolfgang Heine had two sons: Walther Heine (* 1890) and Volker (* 1900). With his fellow student Hermann Bahr he spent a lot of time in literary circles in Berlin, where he also met Arno Holz and Johannes Schlaf . Both sons visited the Wickersdorf Free School Community , which Wolfgang Heine helped to establish.