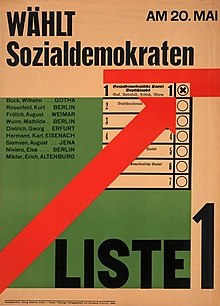 Rosenfeld studied 1896-1899 Law and Economics at the Universities of Freiburg (here among others, Max Weber ) and Berlin , while successful with a jurisprudential promotion completed his studies, he joined the SPD in. In 1905 he settled as a lawyer in Berlin , where he acted as a social democratic city councilor from 1910 to 1920, and represented Rosa Luxemburg , Kurt Eisner and Georg Ledebour in political processes, among others .

From 1914 to 1918 Rosenfeld took part in the First World War; as an opponent of the social democratic truce policy , he was one of the co-founders of the USPD in 1917 . After the November Revolution, Rosenfeld served briefly as Prussian Minister of Justice from November 1918 to January 1919 and was elected to the Prussian state constitutional assembly in 1919 and to the Reichstag in 1920 , to which he belonged until 1932. The Weimar National Assembly he was as substitutes for the deceased deputies Emanuel Wurm on 3 May 1920 until its dissolution on 21 May 1920th

In 1922 Rosenfeld, along with Theodor Liebknecht and Georg Ledebour, was one of the best-known opponents of the merger of the USPD with the SPD, but unlike Liebknecht and Ledebour, Rosenfeld rejoined the Social Democrats. In the Reichstag parliamentary group and party, Rosenfeld was one of the leading representatives of the SPD left, together with Paul Levi and Max Seydewitz , and from 1927 he worked on the class struggle , the theoretical journal of the Marxist left in the SPD. As a lawyer, Rosenfeld represented Carl von Ossietzky , among others , during the 1931 Weltbühne trial .

In September 1931, Rosenfeld was expelled from the SPD because of the breach of parliamentary group discipline in a vote in the Reichstag, together with Seydewitz he was the founder and co-chairman of the SAPD until 1933 . In the spring of 1933 Rosenfeld resigned from the SAPD and asked the members to join the KPD . In the same year he founded the anti-fascist news organization Agence Impress in Paris . After the fire in the Reichstag , he emigrated first to France , then to the USA, where he edited the exile magazine The German-American together with Gerhart Eisler , was President of the German American Emergency Conference and was very active in promoting the unity of all German and German-speaking opponents of Hitler the American continent. Since 1943 he was a member of the Honorary Presidium of the Latin American Committee of Free Germans . In addition, he continued to work as a lawyer in exile.

On March 29, 1934, the Deutsche Reichsanzeiger published the second expatriation list of the German Reich through which he was expatriated .