Georg von Siemens came from the old Goslar city ​​family Siemens (mentioned in a document in 1384); he was a second nephew of the inventors and industrialists Werner , Wilhelm and Carl (von) Siemens. His father, the Berlin judiciary Johann Georg Siemens , provided a substantial part of the founding capital of Siemens & Halske in 1847, from which Siemens AG later developed.

Georg Siemens studied law in Heidelberg in 1858/59 and then worked as an assessor at the Aachen Regional Court . From 1866 he took on various orders for Siemens & Halske; u. a. In 1868/69 he traveled to Persia to conclude negotiations with the Persian government about the construction and operation of the Indo-European telegraph line .

In 1870, on the initiative of Adelbert Delbrück , Siemens was appointed one of the founding directors of Deutsche Bank , and he served as its spokesman until 1900. During this time, Deutsche Bank developed into one of the most important major banks in Germany. Originally established to facilitate the financing of German foreign trade , the bank stayed away from the boom-bust issuing business of the early days . After the founders' crash , she then acquired a central position, u. a. by taking over the ailing Deutsche Union-Bank and the Berliner Bankverein. In addition, at the suggestion of Siemens and Hermann Wallich, Deutsche Bank was the first major bank to seek deposits that expanded the bank's financial resources beyond equity . 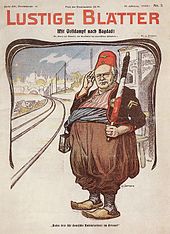 Georg von Siemens as a railway attendant of the Baghdad Railway : Caricature of the Funny Leaves from 1900

From the 1880s onwards, under Siemens' leadership, Deutsche Bank operated the financing of industrial companies such as AEG Emil Rathenaus , Mannesmann , Bayer and BASF . In 1897, Georg Siemens organized the transformation of Siemens & Halske - the company was then headed by his second cousins Arnold and Wilhelm - into a stock corporation in order to strengthen its capital base. Another focus of his work was the financing of international railway construction, including in the Ottoman Empire ( Baghdad Railway ) and in the United States of America ( Northern Pacific Railway ).

Within the board of directors of Deutsche Bank, Siemens took on the role of the - originally non-specialist - "dynamic engineer who conceived large projects, was bursting with ideas and was able to grab hold of things quickly". His board colleague Wallich characterized him as follows:

“[Siemens] ... tried to learn from me and soon surpassed his teacher. I immediately recognized his great talent, and even if I had to fight many a bouquet with him (he already frightened me with his bold thirst for action), we were still good to each other, and in many cases I gave in, following an inner feeling, that it would be indispensable for the future of the bank. "

From 1874 onwards, Siemens was repeatedly a member of the Prussian House of Representatives and the Reichstag , first as a National Liberal and later - after the split in the National Liberals - as a member of the left-liberal German Freethinking Party founded in 1884 by Eugen Richter and Franz von Stauffenberg . In 1901 Siemens was under discussion as the successor to Johannes von Miquel for the post of Prussian Finance Minister , but the deterioration in Siemens' health - the result of cancer - thwarted his appointment.

Georg Siemens married Elise Görz (1850–1938) in 1872, a daughter of the Hessian lawyer and liberal politician Joseph Görz . They had six daughters together. Her second daughter Marie married the archaeologist and museum director Theodor Wiegand , her fifth daughter Annette married the economist, banker and politician Karl Helfferich . Helfferich is the author of a three-volume biography about Georg von Siemens. In 1899 Georg Siemens was raised to the Prussian nobility.

The grave of Georg von Siemens is in the Siemens crypt in the park of Schloss Ahlsdorf in the district of Elbe-Elster in Brandenburg.