Johannes Franz Miquel , from 1897 by Miquel (born February 19, 1828 in Neuenhaus , Grafschaft Bentheim , † September 8, 1901 in Frankfurt am Main ) was Prussian Minister of State and Finance and a reformer .

Miquel came from a French family from Cahors ( southern France ) who immigrated to Düsseldorf and whose lineage begins with Marc Miquel around 1670 in Cahors. His father Anton Miquel (1783–1862) was a doctor and lived in Neuenhaus in the county of Bentheim . Although he was baptized as a Catholic, he was here by his mother Lubertha Miquel, nee. Köhler (1790–1860) brought up a Protestant reformist. His older brothers were the botanist Friedrich Anton Wilhelm Miquel and the high school teacher and editor Franz Wilhelm Miquel . He was engaged to Bertha Markheim , a sister of Julius Rodenberg , around 1852.

Miquel married Emma Wedekind on September 15, 1865 in Hanover (born July 14, 1847 in Bissendorf , district of Osnabrück , † December 16, 1915 in Kassel ), daughter of the merchant and royal Hanoverian consul in Palermo Karl Wedekind and Julia Ehmbsen. Both had three sons and a daughter. One of his sons was the administrative lawyer Walther von Miquel , and one of his grandsons was the resistance fighter Rudolf von Scheliha . In 1880 Miquel separated from Emma Wedekind when he moved to Frankfurt am Main. 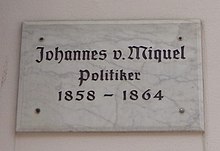 Miquel passed his Abitur examination in 1846 at the Gymnasium Georgianum (Lingen) , studied law in Heidelberg and Göttingen from 1846 to 1849 and became a member of the Neckarbund Heidelberg fraternity in 1846 . At first he took a liking to the ideology of the communists and cultivated relationships with Karl Marx , whom he had met through Wilhelm Pieper . In 1848 he took part in the democratic student movement and was a member of the illegal communist league until 1852 . During the March Revolution of 1848/49 he fought on the barricades of Leipzig and Dresden for democracy, among others together with Wilhelm Wehrenpfennig and Lorenz Theodor Nagel .

After completing his studies, he settled in Göttingen as a lawyer in 1854 and became a supporter of liberalism . In 1855 he was a lawyer at the High Court and in 1857 chairman of the city council. In 1859 he was one of the founders of the national association . In 1864 he was elected to the second chamber of the Hanoverian Estates Assembly, where he belonged to the opposition to the government. After the annexation of Hanover by Prussia in 1866, he took an active part in the integration into the Prussian state.

Over time, his political views moved ever further to the right, which was also reflected in his interest in a more active German colonial policy. In 1882 Miquel was one of the founding members of the German Colonial Association .

In addition to his parliamentary career, Miquel was also active in administration and business.

In 1865 Miquel succeeds JCB Stüve , who came from a long-established Osnabrück family who helped shape the city's interests. Miquel's first term included the changes brought about by the annexation of the Kingdom of Hanover by Prussia. His second term of office as Mayor of Osnabrück began in 1876, after several years as director of the Disconto-Gesellschaft , from which he had withdrawn in 1873 because of possible entanglement of interests with his parliamentary activities. Osnabrück's development accelerated during both of Miquel's terms of office. A consistently introduced reorganization of the urban finance system, new regulations in the area of ​​urban building regulations, practical expansions of the education and school system as well as improvements in the transport system were measures to adapt the city in its function as a place to live and work for a growing population and at the same time modulate their profile as a location for trade and business. His legal and economic expertise, coupled with rhetorical persuasiveness, were also noticed outside of Osnabrück. Johannes F. Miquel followed the call of the City Council of Frankfurt am Main.

In 1880, Johannes Miquel was appointed Lord Mayor of Frankfurt am Main as the successor to Daniel Heinrich Mumm von Schwarzenstein . To reorganize the deficit city budget, he reformed the city's accounting system and introduced strict controls on income and expenditure. Instead of the previous main source of income for the city, the surcharge on the income-related class tax , he relied on the collection of indirect taxes and on operating income through fees . With his skillful social financial policy, he turned the venerable imperial electoral city into an ambitious metropolis. One of his greatest achievements was the reform of welfare for the poor, which until then consisted of private institutions (some of which were still from the Middle Ages) and a completely inadequate communal poor system organized from a police perspective. A number of important public buildings fell during his tenure, e. B. the construction of the Niederrad sewage treatment plant (1882), the canalization of the Main and the new construction of the West Harbor (1886) and the main train station (1888). From 1886 to 1890 he was a member of the Nassau Municipal Parliament for the Frankfurt am Main district . In 1889 he was one of the founders of the stock building company for small apartments , an institution founded by Frankfurt citizens to promote social housing . 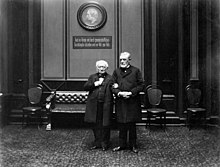 In 1890 Miquel was appointed to Berlin as Prussian finance minister . He developed a revolutionary tax system with the elements of income tax , wealth tax and trade tax , the main features of which are still valid today. This reform was also called "Miquel's tax reform" after him. With the Income Tax Act of June 24, 1891, the previous division of taxpayers into income-dependent classes, each of which had to pay the same tax amount, was abolished and replaced by a progressive tax rate : The income tax rate rose from 6 marks for annual incomes of 900 to 1,050 marks , i.e. around 0.6%, down to 4% (for annual income over 100,000 marks). According to the Municipal Tax Act of July 14, 1893, the municipalities received the income from property tax and trade tax.

In his capacity as Prussian Finance Minister, he took part in the laying of the foundation stone for the Elbe-Trave Canal in Lübeck on May 31, 1895 . After the blows with the silver hammer by the commanding general of the IX. Army Corps in Altona with " Navigare necesse est, vivere non necesse est ", Alfred von Waldersee , hit the granite stone in the ceremony of the Minister of State followed by the Minister of State Karl von Thielen .

Miquel is considered to be the initiator and founder of the Prussian Central-Genossenschaftskasse (short: Preußenkasse) founded in 1895. The Preußenkasse was the first supraregional cooperative financial institution that declared itself responsible for all cooperatives. It is considered the oldest forerunner of the Deutsche Zentral-Genossenschaftsbank (short: DZ Bank, Frankfurt am Main) as a leading credit cooperative institution

In 1897 he became Vice President of the State Ministry. With the award of the Order of the Black Eagle , Miquel was raised to the Prussian nobility on January 27, 1897 in Berlin with a coat of arms from April 14, 1897 .

Forced to resign on May 5th, the year of his death, 1901, after the failure of a canal construction law , he became a member of the Prussian mansion again.

Miquel died on September 8, 1901 in his home in Frankfurt am Main, where he had been an honorary citizen since July 1, 1890 . He was given a grave of honor in the Frankfurt main cemetery (Gewann D 297). A part of the Frankfurter Alleenring as well as streets in Berlin, in his native town Neuenhaus, in Lingen and in Osnabrück are named after him.

For Miquels' 70th birthday, the Minister of Education, Robert Bosse, commissioned the sculptor Ferdinand Hartzer to make a marble bust, which was displayed in the Georgianum grammar school in Lingen. Further specimens were displayed in the Kestnermuseum Hanover and in the ballroom of the town hall in Frankfurt.

For his services to physical exercise and sport in Lower Saxony , he was accepted into the Lower Saxony Sports Honor Gallery of the Lower Saxony Institute for Sports History. In 1877 the University of Berlin awarded him the title of Dr. iur. hc

Lord Mayor of Frankfurt am Main