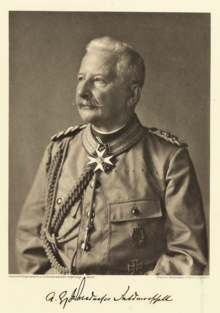 Alfred Heinrich Karl Ludwig Graf von Waldersee (born April 8, 1832 in Potsdam , † March 5, 1904 in Hanover ) was a Prussian field marshal . He mainly commanded military units in Hanover, was Chief of the General Staff from 1888 to 1891 and, around 1900, Commander-in-Chief of a multinational troop contingent that had been sent to Beijing to suppress the Chinese Boxer Rebellion .

He was a grandson of Franz Graf von Waldersee , an illegitimate son of the Prince (from 1806 Duke ) Leopold III. von Anhalt-Dessau from a connection with Johanne Eleonore Hoffmeier. Alfred was the fifth of six children from the marriage of the Dessau- born Prussian cavalry general Franz Heinrich Graf von Waldersee (1791–1873) and Bertha von Hünerbein (1799–1859). Since 1897, the family seat of the von Waldersee family has been at Waterneverstorf Castle in the Waterneverstorf district of the Behrensdorf community .

After his education in the cadet institutes in Potsdam and Berlin, Waldersee was transferred to the Prussian Army on April 27, 1850 as a second lieutenant in the Guards Artillery Brigade. From October 1850 to the end of September 1852 he graduated from the United Artillery and Engineering School and in 1858 became adjutant of the 1st Artillery Inspection. During the German War in 1866, Waldersee was first adjutant at the headquarters and then on the staff of the Governor General of Hanover; he was promoted to major and appointed general staff officer. In 1870 he went to the Prussian embassy in Paris as a military attaché . In this activity he gathered valuable information about the French army, which helped the General Staff a lot in planning the campaign.

In the Franco-Prussian War in 1870/71 , Waldersee was Lieutenant Colonel Wing Adjutant to the Prussian King, then Chief of Staff of the Army of Grand Duke Friedrich Franz II. In 1871 he was again in Paris, this time as diplomatic chargé d'affaires of the German Empire. In 1873 Waldersee became Chief of Staff of the X Army Corps in Hanover.

In 1882, Waldersee became Quartermaster General and thus Helmuth Graf von Moltke's deputy on the General Staff . Moltke had chosen him personally and subsequently built him up to become his successor. In the last few years he gave him a relatively free hand, as in old age he no longer wanted to exercise the administrative management of his office and saw in Waldersee a suitable officer who could replace him.

The strategies developed in 1885/86 for a preventive war against Russia and France in the event of an alliance between the two states (as later developed by Schlieffen ) increasingly came into conflict with the foreign policy of Imperial Chancellor Prince Otto von Bismarck . In 1887, Waldersee demanded again that a preventive war against Russia be reconsidered, combined with rapprochement with the conservative camp around Adolf Stoecker (he and his wife were very involved in the Berlin city mission ) and Prince Wilhelm , the future emperor. In 1888, after Wilhelm II took office, Waldersee was Moltke's successor (at his express request) as Chief of the General Staff. In this position he strengthened the military against politics (War Ministry and Reichsleitung) and played an active part in the fall of Bismarck in 1890. Waldersee was not Bismarck's successor.

In 1891, after unexpected differences with Kaiser Wilhelm II, Waldersee had to vacate his post on the General Staff, as he had dared to strategically defeat the Kaiser during the imperial maneuver and thus to show that the Kaiser actually had little idea of ​​military strategy . For this he was replaced by Alfred Graf von Schlieffen as Chief of the General Staff and as Commanding General of the IX. Army corps to Altona , one at that time, as it was near Bismarck's retirement home Friedrichsruh , an important post. In this capacity he was with others in Lübeck on May 31, 1895 to lay the foundation stone for the Elbe-Trave Canal . After the blows with the silver hammer by the Minister of State , Karl Heinrich von Boetticher , hit the Waldersee ceremony with the Latin saying “Navigare necesse est, vivere non necesse est” (German: seafaring is necessary, life is not) followed by Minister of State Johannes von Miquel the granite stone .

In 1897, Waldersee again became politically conspicuous with the (unsuccessful) demand for repressive measures against the Social Democratic Party of Germany , which he believed would represent the greatest danger to the German Empire , and demanded, but again unsuccessfully, an alliance of the Church, Bourgeoisie and the military to save Germany. In 1898 he became General Inspector of the III. Army inspection in Hanover, appointed Field Marshal General in 1900. In the same year he celebrated his 50th anniversary in the military.

Personal standard of the commander-in-chief in China

1900/01 he received the supreme command of the European intervention troops to suppress the Boxer Rebellion in the Chinese Empire . In German vernacular he was also called - sometimes mockingly, sometimes in admiration - "World Marshal". Since Beijing had already been conquered when he arrived in September 1900, Waldersee took over the role of the occupation officer, who on the one hand stopped looting and on the other hand mediated between the eight occupying powers. Although all the occupying powers respected him, the American and French troops never submitted to his command. The German envoy in Beijing, Alfons Mumm von Schwarzenstein , also had to muster diplomatic efforts in the necessary coordination with Waldersee. He undertook sometimes bloody punitive expeditions against the “nests of resistance” of the “boxers” and thus implemented the retaliatory measures demanded by Kaiser Wilhelm II in his “ Huns' speech ”.

Villa Waldersee in Hanover, Hohenzollernstrasse 40 on the Eilenriede
Postcard from around 1905, Otto Rebsch publishing house

After his return from China in 1901 he was again Inspector General of the III. Army inspection in Hanover and died in 1904.

He spent the last years of his life here in a villa on Hohenzollernstrasse on the edge of the Eilenriede , where a law firm is now based. In 1915, the Waldersee monument (see photo), an oversized stone sculpture created by the sculptor Bernhard Hoetger , was erected opposite the last residence . The extension of the Hohenzollernstrasse was renamed Walderseestrasse after him. His grave is in the family cemetery of the Waldersee family in Stöfs near Lütjenburg in Holstein.

On April 14, 1874, in Lautenbach , he married the wealthy American Mary Esther Lee (1837-1914), widowed Princess von Noer , an important protagonist of the German revival movement and a strong supporter of social institutions.

Waldersee monument on the edge of the Eilenriede in Hanover

Field Marshal General von Waldersee was the first known and successful "political" officer. His predecessor Moltke was also an officer with political ambitions, but he could not "get past" the overpowering position of Bismarck and Roons .

Waldersee's idea of ​​a preventive war against Russia before French military power regained its strength was also promoted by Moltke. This plan is the cornerstone of the well-known Schlieffen Plan , which marked the German strategy in the First World War . For his "military successes" in China, Waldersee was awarded high medals internationally. In addition, he was the first Protestant Christian to receive the Grand Cross of the Order of Pius on June 3, 1903 from the Pope.

Waldersee was traded several times as a candidate for the post of Reich Chancellor . At the time, one often wondered whether he would really have liked to accept the post. But just by the assumption that he would become Chancellor, the favored candidates were previously taken from the crossfire of the press and parties. In his memoirs he himself did not place any value on the office of Reich Chancellor. These can be seen as credible, as he wrote his memories in diary form and they were only published by his nephew years after his death and were not originally intended for the public by him.

Shortly before his death he privately prepared a deployment plan for the Japanese army in Korea for the looming Russo-Japanese war . After his death and the end of the war in Asia, Chief of Staff Alfred von Schlieffen confirmed to the Field Marshal's nephew, Georg von Waldersee , that the successful Japanese offensive had been identical to the Waldersee plan.

In the discussion about great German generals, Waldersee is often overlooked compared to his predecessor Moltke and his successor Schlieffen, although he had the same military talent. His political engagement was more successful than with other generals of the Empire up to the First World War, when Hindenburg and Ludendorff then intervened actively in the politics of the Empire.

Waldersee was in his basic attitude a conservative representative of the Prussian- Wilhelmine era. He was extremely loyal to the emperor and saw social democracy as a threat to the preservation of the empire. As early as around 1871 he saw the danger that Germany would face the threat of an alliance between Russia and France. In the case of the three emperors, despite his mentor Moltke, he could not achieve the step of a preventive strike.