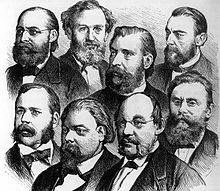 Wehrenpfennig studied in Jena and Berlin theology . During his studies in 1847 he became a member of the Arminia fraternity in the castle cellar in Jena. During the March Revolution of 1848/49 he fought for democracy on the barricades of Leipzig and Dresden, among others together with Johannes von Miquel and Lorenz Theodor Nagel . He received his doctorate in Halle (Saale) in 1853 and then became a high school teacher at the Joachimsthaler Gymnasium in Berlin. In 1857 Wehrenpfennig became senior teacher at the Friedrichsgymnasium. From 1858 to 1862 he was director of the literary office of the Prussian State Ministry (i.e. head of the information department). From 1863 to 1883 he was editor and, together with Heinrich von Treitschke, co-editor of the Prussian yearbooks and, in 1872/73, editor-in-chief of the Spenersche Zeitung . In 1877 he became a secret government councilor and lecturer in the Ministry of Commerce, responsible for technical schools. In 1879 he moved to the Ministry of Education as a senior government councilor.

Wilhelm Wehrenpfennig died in Berlin in 1900 at the age of 71 and was buried in the Old St. Matthew Cemetery in Schöneberg . The grave has not been preserved.