Johann Heinrich Graf von Bernstorff (born November 14, 1862 in London , United Kingdom , † October 6, 1939 in Geneva , Switzerland ) was a German diplomat . Coming from the influential German-Danish politician and diplomatic family Bernstorff , he also made a career in the diplomatic service .

Bernstorff, who was born in London as the son of the then Prussian ambassador Albrecht von Bernstorff and the younger brother of Percy von Bernstorff , went through several posts in the diplomatic service of the German Empire : Constantinople , Belgrade , Saint Petersburg , Munich and London , where he worked from 1902 to 1906 served as counselor. He first achieved global political importance in 1906 when he tried to defuse the Moroccan crisis from his place of work in Cairo .

From 1908 to 1917 Bernstorff was German ambassador to the USA . After the beginning of the First World War he tried to prevent the USA from entering the war, which - in cooperation with US President Woodrow Wilson - despite several anti-German crises in public opinion in the USA (e.g. RMS Lusitania sinking) until his resumption the unrestricted submarine war through Germany and the subsequent declaration of war by the USA in April 1917 for a long time. To this end, Bernstorff fiercely opposed his own country's plans for unrestricted submarine warfare and supported the peace policy of President Wilson, on whose serious mediation proposals to both belligerent alliances he had hopes. All the more eagerly the Pan-Germans and the Supreme Army Command pursued its “cold position”, which took place in 1917 after the USA entered the war with the transfer as ambassador to Constantinople. There Bernstorff, not always acting happily, was confronted with the consequences of the genocide against the Armenians in 1915/16, which triggered renewed pogroms against Armenians during the Ottoman occupation of Baku in 1918. Unlike the former German ambassador, Count Wolff-Metternich , Bernstorff tried to avoid the sensitive issue. Later in his memoirs he remained silent about this unrewarding chapter of his career.

Ambassador Bernstorff, on the other hand, negotiated intensively with the allied Ottoman government about the establishment of a “home” for European Jews who were willing to emigrate in Palestine . Bernstorff, in cooperation with the German General Erich von Falkenhayn , who was active in Turkey, ensured that the Young Turks ' ideas about deporting the politically unreliable Jewish population of Palestine as brutally as the Armenians in death marches were not carried out. The then Ottoman Grand Vizier Talât Pascha explicitly stated to Bernstorff: "Nous avons fait beaucoup de mal aux armeniens, mais nous ne ferons rien aux juifs." ("We have done a lot of harm to the Armenians, but we will not harm the Jews.") 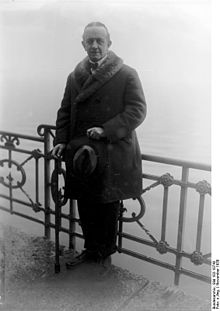 After the end of the war, Bernstorff refused the foreign ministerial post and resigned from active duty. Shortly afterwards he entered the Reichstag for the liberal German Democratic Party , to which he belonged from 1921 to 1928. In 1922 he became president of the German League for the League of Nations and campaigned for Germany's entry into this community of states, which many Germans had rejected as an organization of the victorious powers. In 1929 he was elected President of the International Union of League of Nations. Between 1926 and 1931 he represented Germany as a delegate at the "Disarmament Conference for International Understanding".

In 1933 , when the National Socialists came to power , Bernstorff emigrated to Switzerland .