During the First World War , the German army set up 17 assault battalions and two independent assault companies for the attack, especially in trench warfare , after the combat management that had been customary until then had proven to be ineffective.

These special units of the infantry were primarily used as teaching and training troops and were entrusted with difficult combat missions in which they were mostly not used in full.

The tactical problem of trench warfare

In 1915, the military leaders who recognized Western Front that the current tactics of the infantry in the attack was no longer adequate to the trench warfare back to move out of action pass. The new weapons - machine guns (MG), flamethrowers , mine throwers and infantry guns - dominated the battlefield and favored the defender. Gains in terrain of a few hundred meters could only be achieved with disproportionately high losses .

The development of infantry tactics in the German armed forces

While in Great Britain from 1915 and later in France the introduction of tanks ( tanks ), the German army decided to develop infantry combat in attack. The modification and adaptation of infantry tactics to modern combat led to new leadership and operational principles. The later storm battalion No. 5 (pipe) was the first storm department, which was also used as a teaching and training battalion and from which all other storm departments emerged.

Formation, composition and tactics of the assault battalions 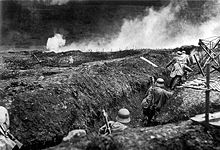 Training in shock troop tactics on a training ground near Sedan, May 1917

In contrast to the regular infantry battalions, the assault battalions were set up from the outset as mixed formations involving a wide variety of means and capabilities (in the further course of the war with grenade and mine throwers, infantry guns, light machine guns 08/15 and flamethrowers).

Named after their commander, Major Calsow, the Prussian army set up the "Calsow" assault division for the fighting in the Vosges in March 1915 from two pioneer companies and a 3.7 cm cannon division. Resounding successes were only achieved after Captain Willy Rohr had taken command of this department. Under him, the department was expanded to a battalion and, above all, the raid troop procedure developed. In addition, the association tested new weapons and equipment, including flamethrowers , upper body armor and steel helmets , which were later introduced throughout the army.

Based on the model of the Storm Battalion No. 5 "Rohr" (formerly Lower Silesian Pioneer Battalion No. 5 ), almost all armies of the German army set up their own storm battalion or a storm company and used primarily as a teaching and training force . Combat missions were only carried out to a limited extent in order to keep troop losses low, not to reduce the level of training through long standing times at the front, and to keep the quality of the training courses carried out by the battalions for exercise troops at a continuously high level.

The later assault battalions were established as formations of the infantry from December 1916 and consisted of:

Image of a storm pioneer by Ludwig Dettmann

The soldiers of the storm battalions were recruited from volunteers, with a maximum age limit of 25 years for the teams . The assault soldiers received special training, state-of-the-art equipment, and better food and pay than other units. In addition, they were accommodated in the rear space between operations, and not directly at the front like the other soldiers at the front. Their combat missions, to which they were often driven by motor vehicle, were correspondingly dangerous and often very costly.

When attacking the enemy lines, the stormtroopers proceeded in small, well-coordinated groups. Every member of a storm patrol wielded either a carbine 98a, socket or socket carbine or NCOs and officers a self-loading pistol as a weapon . The ammunition was not carried in cartridge pouches, but in trouser pockets or in hand grenade bags.

For close combat, a "dagger knife", also known as a trench dagger, a self-made trench club and the short feldspade were used as a striking tool. The assault soldiers were equipped with steel helmets and trousers, which were reinforced with leather on the knees and buttocks. To overcome wire obstacles, the storm soldiers were equipped with wire cutters and linen sacks so that they could throw them over wire obstacles. Towards the end of the war, the storm troops were also equipped with the first submachine gun, the Bergmann MP18 . Both flamethrowers and submachine guns are German inventions of the First World War.

The assault soldiers received training on light machine guns (MG 08 and 08/15) and hand grenades as well as enemy weapons, some on flamethrowing, light mine throwers and grenade launchers 16. In the event of a machine gunner failing, this enabled every soldier to take his place immediately or to capture him could use enemy weapons. This expanded training can be found today worldwide in the training of every infantryman on all weapons in the infantry group.

In 1917, the teams were given the designation " Grenadiers ", as was customary for soldiers in the Guard Infantry and Grenadier regiments. This was reminiscent of the soldiers who were particularly skilled and selected in the 17th century. Deviating from this, the teams of the storm battalions No. 3 and 5 retained the designation "Jäger" and "Pioneer", as they emerged from battalions of these branches of service. The designation “Rifleman” has been retained in the machine gun companies and “Gunner” in the howitzer batteries.

The Flamethrower Squad of Storm Battalion No. 5 wore the uniform of the Guard Reserve Pioneer Regiment with its special skull sleeve badge. To recognize the special task again, a skull was added in June 1916 (based on the model of the Braunschweig Infantry Regiment No. 92) for the leather helmet .

The tactics of the assault battalions

Unlike the order of the normal infantry to take entire enemy sections one after the other in storm and trench warfare, the tactic of the storm troops consisted in following a preparatory, short fire from the artillery , to penetrate a previously enlightened weak point in the enemy position and to bypass larger pockets of resistance . While the still strongly defended sections were being fought by the following infantry, the storm troops penetrated further into the enemy hinterland, causing confusion there, hindering the deployment of the enemy reserve and disrupting the attempt of a coordinated counterattack by the reserve troops.

The storm battalions were units that were equipped with overwhelming firepower - machine guns on platoon level, flamethrowers and mine throwers subordinate to the respective assault company, and infantry guns on battalion level for fire support. The secret of their success did not lie in infiltration (without a fight) but in the concentration of overwhelming firepower of all weapons in the breakthrough section under a tactical leader. This enabled the breakthrough through strong enemy fortifications, as well as the rapid penetration into the depths of the enemy order of battle even without a lateral connection. An infiltration, i.e. the unnoticed penetration into the enemy defense, was not possible due to the high enemy troop concentration in the stormtroop tactics.

In the Second World War , this tactic was carried out with modern weapons in operations management on a larger scale and based on tanks and Stukas as " Blitzkrieg " - the infantry implemented the experience gained in the First World War in the structure and tactics in attack in general, and was structured and equipped accordingly.

The incorporation of heavy infantry weapons for fire support in the storm battalions is still generally applicable today in all infantry battalions with their mostly 5th / heavy hunter companies, both in the Bundeswehr and in other armed forces.

At the beginning of the Battle of Verdun , parts of the Storm Battalion No. 5 were used to support the infantry. This was followed by participation in various attack companies in front of Verdun, with parts of the battalion being deployed at maximum company strength. On August 1, 1916, the attack of the 21st Reserve Division (Hessen) on the Souville nose (Nez de Souville) was supported by the battalion's flamethrowers. The battalion also held numerous training courses and demonstrations behind the front.

After considerable contingents of the German army were trained in the new leadership and operational principles on a large scale, the first successes came in the war year 1917. First on the Eastern Front the occupation of the Baltic Islands ( Operation Albion ) and the capture of Riga by the 8th Army in September 1917. In November 1917 the first large-scale deployment of German storm formations began on the Western Front. After the British attack at Cambrai with massive support from tanks , the German troops were able to recapture all of the lost terrain in a counterattack.

The first of the German spring offensives on the western front (" Enterprise Michael ", also "Kaiser-" or "Michaelsschlacht", attack started March 21st) should bring about the decision in the war in favor of the Central Powers . For this purpose, all large infantry units involved were trained in the new combat and operational procedures in the winter of 1917/18. Several assault battalions were deployed as combat troops for targeted attacks. It is true that the German offensive armies initially succeeded in overcoming the British defenses across the board. However, the goal of a strategic breakthrough to force the collapse of the Allied forces was not achieved. Storm battalions were also used in various special companies for the following German attacks, which only brought tactical successes.

After the war, the last remaining storm battalion, the storm battalion No. 5 "Rohr", was used to secure the headquarters of the Supreme Army Command in Kassel.

Formation of the German storm battalions

In the summer of 1916, the Supreme Army Command (OHL) decided to set up four more due to the success of Rohr's Sturm Battalion. The Brandenburg and the Kurhessian Jäger Battalion as well as the two Silesian Reserve Battalions of the hunters were taken into consideration. From July to August, their commanders were sent to Beuveille , the training site of the above-mentioned battalion, for training . Before their training ended, however, the last three battalions were relocated to the east. As a result, only the first became a regular assault battalion and later another model battalion.

By 1917, the OHL should set up 14 more storm battalions. They were given the numbers of the armies they formed. For this reason, the first and probably the most famous among them has the number “5” instead of “1”. Battalions 14, 15, 16 were assigned to Army Divisions A, B, C. All commanders and most of the officers were trained in Beuveille.

Cap badge of the Austro-Hungarian stormtroopers

The importance of the assault battalions was soon recognized by the allies. At the turn of the year 1916/17 Austria-Hungary sent 40 officers and 100 NCOs who were trained in three courses in Sturm-Battalion No. 5 "Rohr". The training of the teams took place in newly established Austrian storm companies, which were attached to the storm battalions No. 8, 10, 11, 12 and the storm company 13. In contrast to the German Empire, the Austrian Army expanded the number of storm battalions massively, so that ultimately the divisions and brigades had their own storm battalions or storm half-battalions. These were less used as teaching troops , but more as special combat troops , whose deployment was limited to the duration of the war. In the final phase of the First World War, these units actually formed the last powerful infantry units of the Austro-Hungarian army .

The Bulgarian army also began training to build storm formations. For this purpose, the German Supreme Army Command had commanded a training command of two officers, four NCOs and 25 men to Bulgaria in September 1916 . After setting up a special training area, the command set up the first Bulgarian assault battalion, which had two assault companies, a mine throwing department and a flamethrowing department. In addition, the command trained Bulgarian and Turkish officers and men of the 1st and 2nd Bulgarian Army in 14-day courses.

Stormtroopers from other nations