Assault guns are equipped with artillery stocked full-track armored vehicles of the storm artillery . They were developed in Germany in the 1930s as a support weapon for the infantry and used in World War II .

In contrast to the classic battle tanks equipped with a combat vehicle cannon (short: KwK , today Panzerkanone ) , assault guns have an assault cannon (short: StuK ), which is not housed in a rotating turret, but firmly connected to the hull in a flat structure, which is the Significantly restricts the ability of the weapon to pivot sideways, but also brings advantages (low silhouette , lower weight, easier production).

The terms assault guns , tank destroyers and tank destroyers are often used interchangeably, but seldom storm howitzer , although these vehicle types differ significantly in terms of structure and purpose.

Assault guns were originally pure infantry support tanks . According to their design, they are also known as casemate armor.

During the Second World War, the uses were divided into armored tank destroyers with tank destroyers for anti-tank purposes and the actual assault guns for direct fire support of the infantry in defense and in the attack against infantry, in particular for combating bunker positions that were only partially suitable for anti-tank purposes, as well as in the armored mobile artillery with self-propelled howitzers or mechanized cannons. All of them (with the exception of the tank destroyers) showed an overlap in their capabilities in terms of anti-tank, fighting infantry and artillery fire fighting.

These types of weapons (tank destroyer vs. assault gun) can be clearly distinguished based on the barrel length of their cannons, see the table in Kampfwagenkanone . Impact projectiles need the highest possible speed to penetrate the armor ; this can be achieved with a suitable propellant charge and the longest possible tube.

However, other types of armor-piercing projectiles also manage with short barrels, which were also used to fire projectiles for fighting infantry.

In order to be able to fulfill its main task - fighting down enemy positions that are difficult to perceive from a distance - the assault gun had to approach the enemy main battle line, the commander had to locate pockets of resistance based on his own observation and fight them directly ( i.e. with flat fire ). This resulted in the following specifications for the construction:

The result was an armored full-track vehicle, which was only 1.96 m high and thus about half a meter lower than a Panzer III (height 2.45 m for version B / C). The same gun was chosen as the gun that was used in the first versions of the Panzer IV . This 7.5 cm assault cannon (StuK 37 L / 24) had a relatively short barrel length, which led to a low projectile speed and, associated with this, to poor penetration performance of the balancing projectiles . The installation of a turret that could be rotated 360 degrees was dispensed with in the assault guns, as was the installation of a machine gun as a secondary weapon. The choice of a short-barreled gun was to prove to be disadvantageous in the later years - when fighting with enemy tanks became more frequent.

The Sturmgeschütz III was the most frequently produced full-track armored vehicle of the entire war on the German side with around 10,500 units. In addition, around 1100 IV assault guns were produced from the end of December 1943 until the end of the war .

A Sturmgeschütz III in the battle for Stalingrad

When deployed, the assault guns should proceed at the same height as their own infantrymen and eliminate any pockets of resistance that have been identified by direct fire. A rushing ahead of the assault guns was just as little intended as a - technically quite possible - action from the depths of the combat area by means of long-range shots.

Since there was no rotating turret, it was necessary in combat operations to first roughly align the entire vehicle with the target to be attacked and then to fine-tune the cannon using hand cranks.

In the course of the war, the focus of operations shifted to tank hunting, and the penetration rate was increased accordingly in the period from 1941 to 1945 by using more powerful combat vehicle cannons. A thicker armor and an optimization of the shape ( pot cover ) have reduced the sensitivity to fire. In addition to their use in infantry divisions, the reworked assault guns were now also assigned to tank divisions - as a replacement for classic battle tanks. Although since 1943, at the latest, the focus of operation was clearly in the field of anti-tank combat and a name change to " Jagdpanzer " was therefore an option , the designation assault gun was retained.

How much the original concept of the assault gun had changed can also be seen from the fact that the German side tried to return to its original purpose with the construction of the Sturmhaubitze 42 .

If a chain was destroyed in an assault gun, it was still conditionally fit for action, since turning around the vertical axis (and thus the orientation of the gun) was still possible through the other chain, only the marching ability was lost. It was only incapable of fighting if both tracks were destroyed. 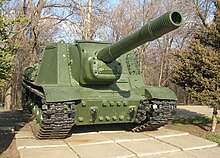 Based on the German model, assault guns based on tank chassis were also manufactured in Italy ( Semovente 75/18 ), Hungary ( 43M Zrinyi ) and Sweden ( Stormartillerivagn m / 43 ). With the Western Allies, however, the concept could not prevail. The USA and Great Britain instead used tanks ( Matilda , Churchill , M8 Scott and variants of the M4 Sherman armed with 105 mm guns ) and light self-propelled guns ( M3 75/105 mm GMC ) for infantry support . This tendency continued in the post-war period. B. in the M551 Sheridan .