The M4 Sherman was an American medium tank that was used in World War II and the Korean War . Officially named Medium Tank, M4 , the US tank of the Second World War, with 50,000 units, was given its nickname Sherman (after US General William T. Sherman ) from the British, who also used it in large numbers.

The M4 was developed in 1941 from the prototype T6 and has been in series production since February 1942. He got the name Sherman when he entered the British Army . There he stood for the first time in the second battle of El Alamein in Egypt.

Armament and armor corresponded to the state of the art at the time, but were rather average. Its great advantages were the vertically stabilized cannon, the low manufacturing costs and the broad-based production with extensive standardization of the components. 2000 pieces are said to have been produced monthly. Due to the large number of companies involved in production, the M4 was equipped with different engines at the same time, which led to differences in quality. The frontal armor was 91 mm on the gun mantlet, 76 mm on the turret front and 63 mm on the hull bow. This was sufficient for use in North Africa in 1942/43, but made the Sherman increasingly vulnerable as the war progressed. As with all American tanks of the Second World War, the commander had a 360 ° M6 corner mirror for observing the battlefield under armor protection.

A well-known weakness of the early M4 was the easy flammability of the ammunition after a hit, which then also set the engine on fire. However, many tanks from the countries involved in the war had this problem. Because of this fire hazard, the Sherman was nicknamed "Ronson" by the crews (a well-known lighter brand with the advertising slogan: "Ronson is always on fire!"), The Germans called him "Tommykocher". Only in the case of the M4, which was manufactured from the beginning of 1944, was this weakness resolved by attaching water containers to the ammunition storage spaces. This system, known as “wet stowage”, reduced the risk of fire after a hit in the fighting area by more than a factor of four.

From the end of 1943 the Sherman was clearly inferior to the heavy German tanks ( Panther , Jagdpanther , Tiger , Königstiger , Jagdtiger ) in battle; under ideal conditions, even a single Panzer VI “Tiger” could inflict heavy losses on a Sherman unit due to its superior firepower and armor. The massive numerical superiority of the M4 as well as the simple repair and maintenance compared to the German vehicles compensated for the qualitative deficiencies.

At the end of 1943 a Sherman variant was under development, which was mainly used in the artillery , but should also be suitable for anti-tank defense. It was equipped with a 105 mm howitzer , which had better penetration but was still insufficient against tigers and panthers. Frontal fire at the heavy German tanks had little chance of success. The standard tactic, therefore, was to request air or artillery support, or to use the numerical superiority and agility of the Sherman to flank enemy vehicles. Panthers and tigers were also vulnerable on the sides or stern. Although this tactic led to high losses among the Sherman crews, it had to be accepted due to the lack of better vehicles.

The Sherman Firefly was an English conversion, in which the 17-Pfünder- Pak replaced (76.2 mm L / 55), the 75 mm gun. This weapon was able to penetrate even heavy German tanks head-on at normal combat distances. The armor protection of the Firefly was not increased, so that it also exhibited the fire sensitivity of the M4.

The first series of the Sherman is the most-built tank in the USA with 49,234 vehicles.

Use in the Wehrmacht

The Wehrmacht first used M4 Sherman loot tanks in early 1943 during battles in Tunisia. Several of the captured Shermans were transported to the Heereswaffenamt (HWA) in the German Reich to examine them.

From the beginning of 1943 until the surrender in 1945, the Wehrmacht and Waffen-SS deployed captured Sherman tanks of various versions under the designation Panzerkampfwagen (PzKpfw.) M4 748 (a) at the front. Shermans were captured in fighting in North Africa, Italy, and the western and eastern fronts. The Shermans were used as battle tanks, armored recovery vehicles and ammunition tugs. The armored turret was dismantled in the Shermans not used as battle tanks. In the 10th SS Panzer Division "Frundsberg" and in the Panzer Brigade 150 , ten Shermans were in combat at times. In all other German associations fewer Shermans were in use, mostly only one-offs. Shermans were also used by non-armored units that had captured these tanks. The 5th Fallschirmjäger Division temporarily deployed six and the 281st Infantry Division (Eastern Front) five Shermans. In order to prevent the Shermans, now deployed on the German side, from being attacked by their own troops, they were marked with oversized crosses .

Modifications based on the M4 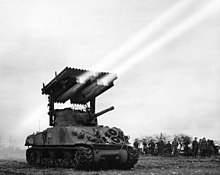 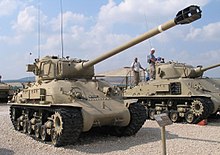 Important modifications based on a modified M4 hull were: 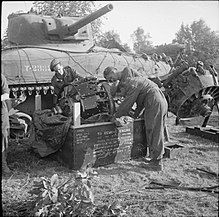 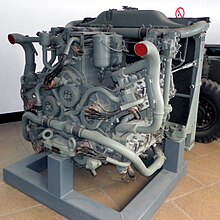 An M4 Sherman played the lead role alongside James Garner in the 1984 US action comedy The Tank . The 2014 film Heart of Steel tells the story of the crew of an M4 Sherman.

An M4 Sherman is used for the Wiltz tank memorial .