from Wikipedia, the free encyclopedia
This is the spotted version , flagged on July 15, 2020 . There is 1 pending change that has yet to be viewed.

Browning M2 as defensive armament for a US North American B-25 Mitchell bomber , World War II. In the picture the command post of the left fuselage gunner

The Browning M2 is a heavy machine gun developed in the United States . It is used in various designs by many armed forces around the world. The latest versions of the M2 are the M2 HQCB and M3M . In the Austrian Armed Forces it is classified as a super heavy machine gun (üsMG) , in the German Armed Forces it is designated as MG50-1 . In the parlance of the US Army , the term “Ma Deuce” (M2 → Ma = M, Deuce = 2) or “the fifty” (“the fifties”) has become established.

The weapon went from the experience of the US military in World War I produced. Here you had to defend yourself against armored targets, but you didn't have the appropriate weapons. That was to change when Colonel John Parker, an officer in the US Army's MG school in France, became aware of French 11mm ammunition used by the French against armored targets and reconnaissance balloons.

The French ammunition was judged to be too inefficient, so John Moses Browning was commissioned with the development of an extremely heavy machine gun, the Winchester Repeating Arms Company in New Haven , Connecticut , should develop the appropriate ammunition. According to some sources, Browning and Winchester are said to have been working on such a weapon of a similar design at the time the official order was placed, but this was still the .30 caliber in a stronger version of the .30-06 cartridge .

The first tests in October 1918 did not show all the desired results - in particular the bullet speed was too slow and the weapon was difficult to control - nevertheless, 10,000 pieces of the Browning M1918 model (caliber .30-06, with water cooling) were ordered by the US Army . Only after a German anti-tank rifle ( tank rifle M1918 ) with ammunition in caliber 13.25 mm was captured, it was possible to develop ammunition with sufficient power to penetrate the armor that was customary at the time. It was the .50 BMG cartridge that is still in production today

The new machine gun was produced from 1921, revised several times and only adopted in its final version in 1933. The versions introduced were: M1921, M1921 A1, M2 and M2 HB. In contrast to the M2, the HB variant ( English heavy barrel = German heavy barrel ) has a longer barrel. Only in the standard version, the barrel is surrounded by a perforated jacket to improve cooling. The machine guns were used by the infantry, on ships, on vehicles and in aircraft.

The air-cooled version of the M2 was carried on airplanes as an on-board weapon during the entire Second World War . Here it was used as a permanently installed version in fighter aircraft or as a defensive armament in the turrets and mounts of bombers. The water-cooled version of the M2 was mainly used as a light anti-aircraft machine gun. The barrel was surrounded by a tank of coolant, which for frost protection reasons consisted of 60% water and 40% alcohol. The coolant circulated inside the tank and protected the MG from overheating. The MG was replaced by the 20-mm Oerlikon automatic cannon in the US Navy in 1942 .

The traditional version of the M2 machine gun remained in service with the US Army and armed forces in other countries until the 1980s. The Belgian company Fabrique Nationale (FN) developed the modernized version M2 HQCB in the 1970s. The modernization of the M2 was necessary in order to achieve a cost-effective compromise between the heavy machine guns and the machine cannons, which were more expensive both in terms of manufacture and ammunition. With the new version it was possible to change the barrel within seconds, since only two movements were required for loosening and attaching and the barrel did not have to be adjusted. Otherwise there are differences in the additional transport handle, a hard chrome plating of the barrel to increase the service life and some minor changes. FN Herstal even delivered a set to retrofit old M2.

Since 2001, the American armed forces have been replacing their old M2HB and HQCB with the new M3M, a further modernized version from FN Herstal. 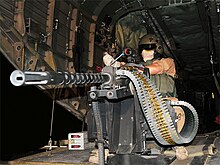 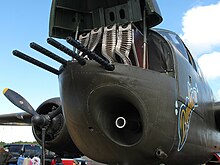 The M2 is a recoil loader with a short barrel movement and a rigidly locked breech . The breech locks with the barrel extension by means of a vertically displaceable locking piece. A sling lever transfers the backward movement of the barrel to the breech and thus acts as a recoil amplifier. A buffer with friction rings (later also an oil damper) at the rear end of the housing reduces the impact of the bolt. An additional hydraulic buffer on the barrel extension dampens the return movement of the bolt. This buffer is adjustable, whereby the cadence can be regulated.

The cartridge that has been fed will be ignited when the barrel and slide are already locked but are still moving forward. The movement impulse thus counteracts the recoil impulse. Due to the buffers, the firing in the forward movement and the low cadence, it is possible to fire the M2 from a simple tripod despite the powerful ammunition.

Technically, however, the M2 is able to achieve a significantly higher cadence. This was implemented in the M3 aircraft machine gun.

The ammunition is supplied through fabric or metal link disintegration belts, usually from the left. After some parts have been replaced, the feed can also come from the right.

The M2 shoots both semi-automatically and fully automatically. The device for semi-automatic fire is unconventional: a bolt lock catches the bolt in the rear position. The trigger for the locking device is located at the rear of the housing between the wings of the trigger. To fire a single shot, the shooter actuates the release of the bolt lock, whereupon the bolt snaps forward and feeds a cartridge. Then the shooter pulls the trigger . In order to shoot fully automatically, the shooter presses the trigger of the breech lock and sets it by turning it. This deactivates the shutter lock and the shutter advances freely every time.

Most M2 are not cocked directly via the cocking handle on the lock. An external clamping lever , which overcomes the high initial resistance of the clamping movement with leverage, is mounted on practically all manually operated M2. 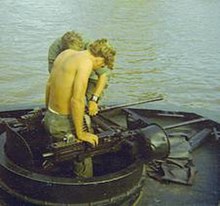 M2 as a twin machine gun in the bow of a PBR patrol boat during the Vietnam War , late 1960s.

M2HB on an HMMWV

Many US fighters such as the P-38 Lightning , P-47 Thunderbolt or P-51 Mustang used the M2 as their main armament. In the US bombers it was used to defend against enemy fighters. The B-17 bomber , which was nicknamed the “Flying Fortress”, had 13 M2 Brownings from the E version onwards, which made the bomber a difficult enemy for Axis fighters to fight.

The M2 is used in many variants. The US military has twelve names for the weapon, depending on the application and version. The M2 can be found as helicopter armament on the OH-58 Kiowa Warrior in the so-called Gunpods, as gunner armament under the designation GAU-18 / A, also known as M3M by FN Herstal in the HH-60G Pave Hawk of the US Air Force .

In Germany, the M2HB under the designation MG50-1 can be found comparatively rarely. Among other things, it is used on individual frigates and especially speed boats of the Navy as a close-range weapon and in the Army in the KSK as the main weapon on the Serval . Since the introduction of the GTK Boxer in the Bundeswehr, the MG50-1 has been used as a heavy machine gun in the FLW 200 . With its use in Operation Enduring Freedom , the M3M was introduced as a helicopter armament (the CH-53 was transferred from the Army to the Air Force in 2010) and has since been used by the German Navy , the German Army and the Air Force. Originally it was a board armament of M47- and M48 Patton tank entrance to the Bundeswehr, which it initially as Vierlings- Fla began -Geschütz.