The M7 ( Howitzer Motor Carriage ) was a self-propelled howitzer from American production. It was introduced in 1942 and was used in World War II and the Korean War .

The M7 Priest was developed in 1941 because the US Army lacked a light, all-terrain vehicle for artillery support. The Priest is based on the chassis of the M3 Lee / Grant . The main armament consists of the standard gun, caliber 105 mm, of the US Army. Due to its excellent ballistic properties, this gun could be used effectively both artillery and anti-tank . Only a few artillery pieces from the Second World War were so well suited for fighting tanks, since the ammunition types developed for this mostly consisted of fragmentation or HE shells for use against infantry . These projectiles did not have sufficient penetration against tanks. The 105 mm cannon was one of the few for which armor-piercing ammunition was available. In the direction of travel to the right of the gun was in a pulpit, a Browning M2 - MG for anti-aircraft built and short-range defense. This pulpit owes her nickname M7 Priest ( German : Priest ) as they to the preachers pulpit recalls in the church. The British Army ordered 5500 units, but they were not fully delivered, the US Army around 3000. 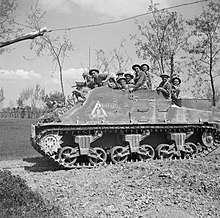 The M7 Priest Kangaroo was actually a by-product of sorts, but it soon turned out to be perfectly suited for the intended tasks. It was developed in early 1944 by the Canadian Army from the standardized M7 Priest of the US Army.

It should be used to bring infantry safely through enemy machine gun fire in order to drop them directly on the scene.

The howitzer and ammunition mounts were removed from the vehicles. The recess in the front was closed by an armor plate. Loopholes for machine guns or PIATs were sometimes made in these . However, these changes were not planned by the developers. In addition, the side skirts have been raised and lengthened to the rear to provide better protection against infantry fire in the interior. The characteristic MG pulpit was retained.

The Kangaroo was intended as a pure armored personnel carrier, but was also used as a radio, ammunition and medical tank. When it rained, a tarpaulin was pulled over the vehicle, which was attached to numerous eyelets around the fighting compartment in order to keep the interior at least a little dry. A pole should support the tarpaulin in the center of the vehicle so that rainwater does not collect, but rather drains off the sides before the tarpaulin tore.

Even when the tarpaulin was in place, a 15 to 20 cm slot between the vehicle and the tarpaulin provided a complete fire area with all-round visibility. Depending on the season, three tarpaulins (autumn, summer and winter camouflage) were available to make aerial reconnaissance more difficult. The entire tank could, similar to some later US military vehicles, be completely camouflaged with variously shaped tarpaulins. Most of the time, however, the vehicles were camouflaged with paint.

It was also thought of converting the kangaroo for the pioneer troop. Similar to the “Sherman Crab”, a roller with numerous chains attached to it should be mounted in front of the tank. If the roller rotated, the chains hit the ground and were supposed to detonate mines lying in the ground. He should also be equipped with machine guns and flamethrowers. The Western Allies had already successfully used such vehicles in the battles for El Alamein , in Tunisia , Sicily , Italy and the landings in Normandy and southern France .

The "M7 Priest K Crab" was never built, however, because the Americans ("Sherman Crab") and the British ("Churchill Crab") already had enough effective mine clearance tanks. In addition, it became superfluous after the end of the war.

There was also an effort to build the M7 Priest Kangaroo with a closed ceiling and two or more exit hatches to further increase armor protection. However, this would have made getting out of the vehicle a lot more difficult and tedious, so that this plan was never implemented. Use as a radio or observation tank would have been possible, but never included in the plans of the British Army.

Parole at the front

The kangaroo was first used in France in August or September 1944 (the reports mention five different dates). In addition to the four-person crew (driver, radio operator, machine gunner, commander), up to 15 infantry men with full combat equipment could be transported, with the engine area behind the combat area being fully utilized.

As with the normal priest, the open interior space was the weakness of the tank, as it could easily be put out of action by hand grenades. The crews at the front countered this by stretching nets or tarpaulins (ponchos) over the vehicles that were supposed to throw back the hand grenades. This procedure was quite successful.

Despite a few shortcomings, the Priest Kangaroo enjoyed great popularity with the Allied armies due to its technical reliability and ease of maintenance. The Priest Kangaroo was not only used by Commonwealth troops , but also by the US Army, as well as by the Polish Army in Exile and the Free French Armed Forces .

After the world war

Even after the war, the M7 Priest was mass-produced and then used in the Korean War . One of the last "real" kangaroos is a memorial on a training ground in Scotland, another was in a museum in southern England until 2002. It is currently on loan at the Kubinka Russian Tank Museum . It is the last example with the original and complete interior and complete gun.

Numerous changes were made to the post-war version from the year of construction 1954 (before that there were conversions). Among other things, the MG pulpit was raised by about 10 cm, as were the side skirts. The front and rear armor were also reinforced.

Use in the Bundeswehr and other armies

The M7 Priest was the Bundeswehr's first self-propelled howitzer , introduced in 1956 and replaced by the M52 self-propelled howitzer in the early 1960s . For a long time, newer versions of the kangaroo were still in use in some armies in Africa and South Asia. Missions on the Israeli side in the various wars of the years after the Second World War are certain.