Spähpanzer SP IC in the WTS in Koblenz

The Spähpanzer SP IC was the test model of a reconnaissance tank with anti-tank components, built on the armored personnel carrier .

Experiences from the Second World War also flowed into the establishment of the Bundeswehr's tank reconnaissance troops ; Without a doubt, one was thinking of a vehicle like the Puma ( SdKfz 234/2 ), which was equipped with a main armament that was large enough for such a vehicle. For this reason, but also with the intention of adding rifle companies to the tank reconnaissance battalions as an element of infantry fighting force with a fighting style similar to that of tank grenadiers , a reconnaissance tank with the option of anti- tank defense should also be introduced.

The armored personnel carrier Kurz (Spz. Short), which was already intended to equip the troops, received a different tower with different main armament. The expected higher combat weight, however, made profound changes to the chassis, engine and braking system briefly necessary compared to the standard Spz. The cannon had only a short barrel return , which made it possible to install it in the small turret. The intended use of a wing-stabilized anti-tank grenade with the barrel drawn was remarkable. At that time, however, the effective range of the cannon was just sufficient, which was already seen as a deficiency, as an increase in output was no longer possible. An automatic loading system for the two-man tower was also tested, but had to be rejected as unacceptable due to serious defects.

This type of combat vehicle was not pursued further, although the need to equip light wheeled or tracked vehicles with anti-tank armament certainly existed. The projects carried out in this regard in other countries (e.g. AMX-10 RC ) had proven this in retrospect. 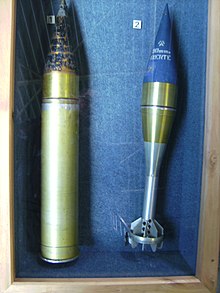