The VT1 tank ( test vehicle 1 ) was an experimental vehicle for the German armaments industry on behalf of the Federal Office for Defense Technology and Procurement . The casemate tank was a study for a successor to the Leopard 1 and was developed between 1972 and 1985. One prototype each of the VT1-1 and VT1-2 were built. The VT1-2 is (as of September 2019) in the Defense Technology Study Collection in Koblenz . 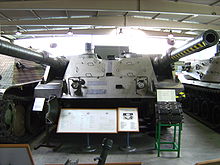 VT1-2 from the front

At the time of the considerations that led to the construction of the experimental vehicles 1-1 and 1-2, the western main battle tanks - with a few exceptions - were far inferior to the main battle tanks of the Eastern Bloc. This particularly affected the mass of the US Army vehicles . These were underpowered, so they were too immobile and had too little firepower. Since the early models of the Leopard 1 still needed a shooting stop and the 830 hp engine could just about be considered sufficient, new ways were sought for a threatening tank, regardless of the fact that the Leopard 2 was already in development and was a satisfactory solution began to emerge here.

Firepower, agility and survivability in tank combat against a numerically superior opponent who attacked over a possibly nuclear contaminated area were the basic ideas when creating the concept. The result was a futuristic-looking tank that was equipped with revolutionary technologies.
A turretless compact vehicle with two height-stabilized cannons, automatic loading, exceptionally strong front armor and a previously unknown engine power was constructed. Supported by the computer-aided fire control system, the gunner aimed at the target in the so-called “target passage procedure” and kept the fire button pressed; as soon as the cannons were congruent with the target at the next change of direction, the shot was triggered automatically. In addition, it was possible to keep the tank in constant motion during fire fighting (tactical fronding) in order to present itself as a target as little as possible. A large number of sudden changes in direction makes it much more difficult to properly aim at one's own vehicle, and it is practically no longer possible to determine the lateral lead. The tactical weaving drive is only possible with the appropriate engine power.

The VT1 was not actually a main battle tank, but a heavy assault gun or a tank destroyer (the threat of Soviet tank masses in the north German lowlands was undoubtedly in view) - due to the casemate construction and high firepower with a low silhouette. The three-man crew sat next to each other behind the strong front armor on a sprung platform, the driver in the middle, the commander on the left, the gunner on the right. Behind the fighting area was a separate section with the electrical and hydraulic systems. The engine consisted of an MTU / MB 803 RA-500 engine (the MB 873 Ka-500 engine of the Kampfpanzers 70 drilled to a capacity of 52,000 cm³ ) with four exhaust gas turbochargers . As a result, the maximum output could be briefly increased to 2175 hp. This achieved a power-to-mass ratio of up to 50 hp / t, compared to the Leopard 2's only 27 hp / t. The gearbox and chassis were also taken from the Kampfpanzer 70 (Kpz 70), the latter being shortened by 75 cm by removing a roller segment. The hydropneumatic suspension was also equipped with a switch accumulator suspension, which enabled the absorption capacity to be increased even further. The fire types should be both single and double shots or volleys (ten to twelve rounds / min). In the covered position, the vehicle could be moved sideways using two electric motors (fed by a generator). With the two electric motors, creep speed was also possible. The two test vehicles were not equipped with NBC protection and underwater driving options.

In 1969, the first studies began for a successor to the Leopard 1 main battle tank , taking the concept of a turret tank, a top - mounted tank ( VTS-1 ) and a casemate tank into consideration.

Battlefield test vehicle GVT 04 with 105 mm double tube simulator and Talissi laser shot transmitters. The five vehicles in this series were used to test combat technology. (The GVT are part of the VT1 program. They were procured after the two VTs had been built in order to test the fighting technique more closely.)

In 1972 the Federal Office for Defense Technology and Procurement and the MaK company signed a contract for the development of an experimental vehicle in a two-tube casemate design. Also in 1972, a joint further development for the vehicle was agreed with Great Britain. In Germany the project should be called Kampfpanzer 3 (Kpz 3), in Great Britain as MBT 80 . In 1975 the conception phase ended with the declared intention of creating a common basis for the continuation of the projection phase. The Kpz 3 should be equipped with a modern main weapon; a total of three had been selected in 1975 after several comparative tests. There was a choice of a 120 mm smoothbore cannon developed by Rheinmetall (for KE and MZ ammunition), Great Britain favored a rifled 110 mm cannon, while the US Army would prefer a 105 mm cannon (as it was already in Leopard 1 was used) with improved ammunition and already offered this ammunition.

The prototype VT1-2 from the front

The development committee for the Kpz 3 informed the authorities concerned (BWB, Federal Ministry of Defense and Army Office ) about the design proposals of the five companies involved.

In Great Britain comparison shooting began with the three different cannons.
Beginning of the field test at the armored troop school in Munster.

End of German-British cooperation. From the German point of view, an insufficient improvement in the tactical value was indicated, from the British point of view the abandonment of the project was justified with the production phase not possible before 1989.
Although a decision had already been taken against a casemate tank, Germany continues to carry out studies in which France can be included this time.

The Franco-German concept concluded that further development efforts should focus on a low-profile tank, 120 mm smoothbore cannon in a two-man turret, automatic loading system and improved fire control system. The hull of the Leopard 2 can still be used.
France only agreed to continue working together if Germany also took the Leopard 2 hull as a basis, and reserved the decision until 1985.

The two prototypes differed - apart from small things - only in the main armament. VT1-1 had two rifled 105 mm cannons, VT1-2 two 120 mm smoothbore cannons - the left one with an automatic loader with a 6-cartridge magazine.

The advantages were offset by a large number of disadvantages. Technically, the vehicle could have been realized, but the concept was too much geared towards the fight against mass tank attacks. The weapon was less suitable for other purposes, mainly due to the lack of a rotating turret. The field test at the troop school (KTS 2) revealed the following deficiencies: