The Kampfpanzer 70 ( KPz 70 ; English Main Battle Tank 70 , MBT-70 ) was a joint project between the USA and Germany in the mid-1960s . The development ended in 1971 when the project was discontinued. The Leopard 2 and M1 Abrams main battle tanks are based on the results of the development work .

In 1963, before the first production vehicle of the Leopard 1 , there were considerations to replace the M48 in the German armed forces and the M60 in the US Army in the 1970s with a suitable tank. In terms of technology, the Kampfpanzer 70 or Main Battle Tank 70 should outperform all known tanks. In August 1963 the contract was signed at the government level to develop a uniform, standardized battle tank for the armed forces.

The necessary military demands were published in December 1963 and a prime contractor was appointed by each state. The USA commissioned General Motors , the Federal Republic of Germany the German Development Company (DEG), which consisted of the companies Krauss-Maffei , Keller & Knappich , Luther Werke , Rheinstahl-Henschel, Atlas MaK and the Rheinische Stahlwerke . The Wegmann company took over the manufacture of the tower.

The time between 1964 and 1966 was used to develop a common concept, to determine the main assemblies and to work out the design. Various wooden models were created on a 1: 1 scale. The American demands for protection against mobility clashed with Germany's demands for mobility against protection and were just a few obstacles that arose from different tactical ideas. However, there was consensus that the firepower should be high. The completion of the first prototype was required by March 1967. On the US side, the first prototype was presented in July 1967, the German prototype followed in October, both without a fire control system. The first driving tests and factory trials began in 1968. The number of prototypes to be produced was reduced from eight to six per country. The total number was thus 14. With the second generation - which was started in 1969 - a weight reduction was to be achieved, which could still be proven on the basis of the prototype PT VI .

Because of the steadily rising development costs - up to then around 830 million DM (about 424.4 million euros) - Germany left the project in 1969. The Federal Ministry of Defense , represented by the Federal Office for Defense Technology and Procurement, commissioned Krauss-Maffei with the planning and construction of the Leopard 2 main battle tank  - a project that had been started in 1968 as an experimental development Keiler (Leopard 2K). The battle tank 70 prototypes and their turrets served in this phase in the ET 700 program as test vehicles for engine and running gear parts. The Eber study (Leopard 2FK), which was also commissioned by the Federal Office for Defense Technology and Procurement and carried out by Krauss-Maffei, was ultimately rejected. According to General Heinz Günther Guderian , a solution with a cannon was preferred, the concept of a battle tank based on the battle tank 70 with a driver in the hull and a 152 mm combination weapon was not acceptable.

In the USA, a stripped-down version, the XM803, was worked on until 1971, but it never reached series production. The reason for this was the demanding performance requirements, which in turn led to significant defects and reliability problems occurring in almost all assemblies. The United States Congress stopped the project in November and distributed the funds to the XM815 project, later XM1, which was renamed the M1 in 1980. The main gun of the main battle tank was used in a shortened form in the M551 Sheridan .

Seat arrangement and design of the interior

The hull of the main battle tank was very flat and carried a turret that housed the entire three-man crew, including the driver. The driver, equipped with three corner mirrors , sat on the left in a rotatable driver's cab that was always automatically aligned with the direction of travel of the tub. Due to the fact that the driver's cab did not always turn correctly, the movements did not always correspond to those of the tub, which required a spatial sense of the driver. Behind this, the 20-mm was automatic cannon for air defense. The gunner found his place in the right side of the tower and had a corner mirror and his own tower hatch. The commander sat in an elevated position directly behind him and had six corner mirrors for all-round visibility. The loader was dispensed with. The main battle tank had an automatic loading system in the turret rear.

Driving tests of the MBT 70 in Aberdeen Proving Ground

The prototypes in the US version were powered by an air-cooled V12 diesel engine AVCR-1100 from Teledyne Continental Motors with 1080 kW (1470 hp); in the German variant, a Daimler-Benz MB 873 Ka-500 engine with 1100 kW (1500 hp) was used, which was later replaced by a derivative from MTU . Both engines were designed as multi-fuel engines. When operated with gasoline, the power of the German engine was 809 kW (1100 hp). The top speed at maximum engine speed was 72 km / h, the average 68 km / h. The engine block from Daimler-Benz had the same bore with 165 mm as the Leopard 1 engine. The piston stroke was reduced to 155 mm in order to reach the speed of 2600 rpm. In contrast to the Continental engine with variable compression ratio and two-stage turbocharging, the technically mature solution with two exhaust gas turbochargers and charge air cooling was chosen to achieve the required performance. The fuel supply of both tanks was 1300 l. A three-phase generator with an output of 20 kW served as a power generator. The battery system consisted of eight batteries with 400 ampere hours .

The gearbox used was the HSWL 354 manual, reversing and steering gearbox from Renk, which was also installed in the later Leopard 2, and both variants were used. Equipped with an integrated service brake and a wear-free hydraulic flow brake (hydrodynamic retarder ), it was used to transmit power, to brake and to steer the tank. The automatic gearshifts with four forward and two reverse gears were electro-hydraulic. The steering radius of the tank was dependent on the selected gear of the integrated superimposed steering gear.

The armor of the turret and hull was designed as spaced armor . The required radiation protection against neutron radiation for the combat area was achieved by using a 15 cm to 20 cm thick layer of polyethylene . Generation 2 received additional side skirts to protect the drive. In addition to an NBC protection system, the fighting room had a fire suppression system and air conditioning. All electrical assemblies were protected against EMP and the optics were provided with "atomic lightning protection".

The armor provided ballistic protection against 105 mm APDS ammunition over a distance of 800 m . 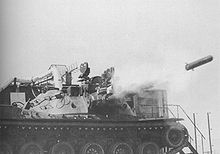 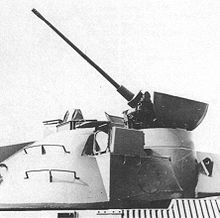 The 20 mm automatic cannon in detail. Below the steering device for the Shillelagh missile

The main armament consisted of the XM 150E5 combination weapon in caliber 152 mm developed by General Motors. Equipped with a smoke evacuator and provided with a field / train profile, the weapon was able to fire conventional tank ammunition as well as an anti-tank guided weapon of the MGM-51 Shillelagh type . The guided missile was guided by a keyway in the barrel to prevent rotation around the longitudinal axis during flight. A heat protection cover, as is otherwise customary to compensate for the temperature effects in sunlight, rain and snow, was dispensed with.

The swivel range of the tower was 360 °, the elevation range of the cannon from −9 ° to + 20 °. The straightening and swiveling process of the straightening and weapon tracking system developed by Cadillac Gage and Feinmechanische Werken Mainz (FMC) was electro-hydraulic. The system's pumps were embedded in the tub. The cannon was pre-stabilized and followed the values ​​of the primary stabilized target optics.

Due to reservations about the Shillelagh system, plans arose in Germany to install a 120 mm smooth -barreled cannon made by Rheinmetall , which should also use an automatic loading system.

Were used as a secondary armament axially mounted to the main weapon machine gun in the caliber of 7.62 mm, and a tower independent 20 mm machine gun for air defense. The MK 20-Rh202 from Rheinmetall used in Germany had a height straightening range of −15 ° to + 65 ° at a straightening speed of 60 ° / s and a side straightening range of 360 ° at 90 ° / s. The time for retracting and extending the weapon system was 3 s and 4.5 s. Like the on-board cannon, the weapon followed the specifications of the stabilized target optics.

For camouflage and self-protection, the tank had a smoke and explosive device on the tower.

The pancratic telescope developed by DELCO Electronics with a magnification of 8 to 14 times with a self-stabilized line of sight served as the main rifle scope (HZF) for the gunner. A laser was used to determine the distance. Both were combined in the armored viewing head, which was located to the right of the main weapon and was protected by a hinged fire screen. The steering mechanism of the Shillelagh missile was located on the left below the 20 mm automatic cannon. A tower rifle scope (TZF) was available as an auxiliary telescopic sight, which could also be used at night.

The commander's aiming devices were on the tower roof and could be lowered into the tower. The panoramic and anti-aircraft riflescope was stabilized and was used to observe and guide the anti-aircraft machine gun. The elevation range corresponded to the secondary weapon from −15 ° to + 65 °. To the right of this was the infrared night vision device, which, in contrast to the panoramic periscope, reached a large size. All optics had a switchable electrical de-icing system.

Various systems were tested for night combat. The main battle tank received the IR / white light shooting light XSW-30-U from AEG-Telefunken from the Leopard 1 , which was mounted on the left of the gun mantlet. The infrared night vision device on the tower had a television camera. The driving system was also passive and was supported by a driver television system.

In order to be able to hit a target while driving, the Kampfpanzer 70 was equipped with a digital fire control computer, which determined the necessary lead and the attachment. The main rifle scope served as the leading optics; the stabilized mirrors of the line of sight were the requirements for tracking the turret and weapon through the weapon tracking system. Taking into account air and powder temperature, air pressure, trunnion tilting, cross wind and pipe wear, the necessary corrections were determined and implemented. The reverse control, a speed-assisted target tracking system, reduced the error rate by half by calculating the own movement when driving across and the change in distance to the target. The gunner only had to report.

The total ammunition supply was 50 cartridges, all of which were stored in the turret, 26 were in the automatic loader. As tank ammunition was HEAT -ammo, grape ammunition and armor piercing, fin stabilized discarding sabot projectile type APFSDS (APFSDS for A rmor P iercing F domestic S tabilized D iscarding S abot) are available. The MGM-51 Shillelagh (US) guided missile with combustible casings should increase the hit probability at long combat ranges.

A whole range of ammunition was available for the anti-aircraft gun, which was manufactured according to the NATO standard - caliber 20 × 139 mm. By using a double belt feeder , two different types of ammunition could be fired in direct alternation. The ammunition supply was 660 cartridges.

After the project was discontinued, two prototypes of the main battle tank 70 were given to museums. There is one copy each in the Defense Technical Study Collection in Koblenz and in the Munster Tank Museum . The American variants are located in Fort Knox , the Aberdeen Proving Ground (US Army Ordnance Museum) and the Southern New England Military Museum.